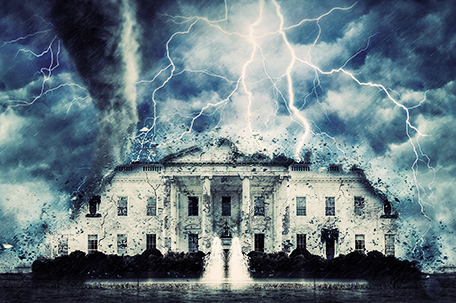 Unlike the other scandals connected to the Trump Presidency, the Ukrainian president/whistleblower scandal seems to have made everyone take notice.

If you’ve been on Twitter any time since Speaker of the House Nancy Pelosi’s news conference announcing an impeachment investigation into President Donald Trump, the president’s Twitter feed has provided some interesting reading.

Since Pelosi announced that Trump’s request for Ukrainian President Volodymyr Zelensky to investigate former Vice President Joe Biden and his son Hunter and the whistleblower’s report that came as a result of it, was enough to start an impeachment inquiry, Trump’s behavior and the way it manifests itself on Twitter have been more quixotic than usual.

From denouncing the investigations as treason, to retweeting the quote from Pastor Robert Jeffress that said his impeachment could cause “a Civil War-like fracture in this Nation from which our Country will never heal,” to calling on the Chinese to investigate the Bidens, Trump’s already outlandish Twitter feed has become the stuff of legend and his supporters on Capital Hill, such as Sen. Pat Toomey, are on the defense.

“The memorandum released by the White House reveals no quid pro quo,” Toomey said. “While the conversation reported in the memorandum relating to alleged Ukrainian corruption and Vice President Biden’s son was inappropriate, it does not rise to the level of an impeachable offense.”

But the question becomes, why now? Why did the call with President Zelensky offering to exchange election dirt for military aid already approved by Congress and what’s happened to the whistleblower who exposed that offer cause a call for impeachment when the report from Special Council Robert Muller, and its details of Russian interference in the 2016 presidential election couldn’t?

And why has this led to some Republicans, most notably Iowa’s Sen. Chuck Grassley — the most senior Republican senator and the Senate’s President Pro Tempore — to break away his fellow Republicans who are calling the whistleblower’s contentions hearsay?

“This person appears to have followed the whistleblower protection laws and ought to be heard out and protected. We should always work to respect whistleblowers,” Grassley, a longtime proponent of whistleblowers, said. “Complaints based on second-hand information should not be rejected out of hand, but they do require additional leg work to get at the facts and evaluate the claim’s credibility.”

For some, like Congressman Dwight Evans, it was a presidential overreach that couldn’t be ignored, especially as someone who represents the birthplace of our nation.

“Beginning a formal impeachment investigation is about protecting the Constitution that was written and signed nearly 250 years ago in Philadelphia,” Evans said in a statement. “An allegation of trying to use the power of the presidency against another country, in the context of withholding funds that Congress approved, to create dirt on a political opponent – this is incredibly serious and must be investigated.”

Another thing that appears to have made this particular transgression from the president catch on with the public and with Congress is that everyone can understand “abuse of power”, said State Sen. Anthony Williams.

Especially since this abuse of power is blatant and possibly republic-ending.

“Watergate was elementary school — this is graduate school,”  Williams said. “This man is not about getting re-elected; he is trying to set himself up as emperor of this country. The president has evoked the term “Civil War” and has demonstrated that he does not care about the rules; I’m not sure that the gravity has hit the every day citizen yet.”

While it’s a common perception that eventually Articles of Impeachment will be voted out of the House of Representatives, what happens when they get to the Senate?

The Senate has no choice but to act, a spokesman for Sen. Bob Casey said. Under the Constitution, the Senate has to hold a trial to consider the articles. That trial would be presided over by Supreme Court Chief Justice John Roberts and Senate leaders would determine how long it lasts, according to the Constitution.

But since that’s under the control of Senate Majority Leader Mitch McConnell, a staunch ally of the president, it is safe to assume there will be any number of monkey wrenches thrown into it, one of those wrenches being the contention that Congress has other more important things to do.

“The Democratic majority in the House can investigate AND legislate at the same time – we’ve already been doing both for over eight months now,” he said. “We can address challenges such as infrastructure, health care, education, gun violence & poverty, regardless of who is in the Oval Office. The Senate can too.”

Besides, this is too important to ignore, Casey said.

“If there is a core lesson President Trump should have learned from the 2016 election, it is this:  Pressing a foreign actor to interfere in our national elections is a fundamental corruption of our democracy, an affront to the Constitution, and a grave breach of his oath of office,” he said. “Each member of the House and the Senate must decide whether he or she will stand for the country or cave to this Administration….

I pray that each member chooses our country.”

Now that the House of Representatives has started an impeachment investigation regarding President Donald Trump and his actions concerning the Ukraine, here is what happens next:

— Speaker of the House Nancy Pelosi will decide whether the investigation will be handled by either the House Judiciary Committee or if a separate special committee.

— After the inquiry is completed, a House member will introduce an impeachment resolution.

— Speaker Pelosi will direct the House Judiciary Committee to hold a hearing on the impeachment resolution to determine whether the measure should be put to a vote of the full chamber and if so, when that vote will take place.

— The impeachment resolution must then be approved by a simple majority of the Judiciary Committee.

— If the Judiciary Committee approves the resolution, it will move to a full vote on the House floor.

— The president is then impeached if a simple majority of those present and voting approve an article of impeachment.

— A trial is then held in the Senate as mandated in the Constitution.

— House members serve as managers in the trial, playing a similar role as prosecutors in criminal trials, presenting evidence.

— The president is entitled to legal representation throughout the trial, which will be presided over by John Roberts, chief justice of the U.S. Supreme Court.

— After listening to evidence and closing arguments from both sides, the Senate will retire to deliberate.

–After it reconvenes, the senators will then cast a vote. If President Trump is found guilty, he or she is removed from office, and Vice President Mike Pence will become the nation’s 46th president. If found not guilty, the President is considered acquitted. In order to convict, a two thirds vote of the Senate is necessary.

According to Article I, Section 3, Paragraph 7 of the U.S. Constitution, “ Judgment in Cases of Impeachment shall not extend further than to removal from Office, and disqualification to hold and enjoy any Office of honor, Trust or Profit under the United States: but the Party convicted shall nevertheless be liable and subject to Indictment, Trial, Judgment and Punishment, according to Law.