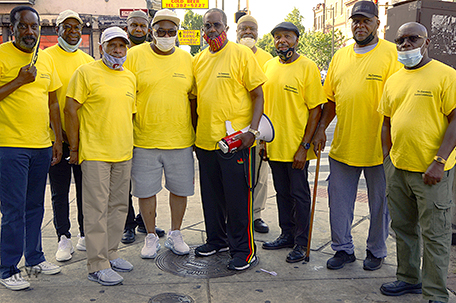 The Philadelphia Community Outreach Committee is helping folks living on some of the city’s roughest blocks make things a little less rough.

Right now, the City of Philadelphia is undergoing a wave of violence that has claimed almost 300 lives, including that of 7 year-old Zamar Jones last weekend.

Philadelphia City Council’s Special Committee on Gun Violence has scheduled public hearings for Aug. 11-12 that will bring together everyone from the Philadelphia Police Commissioner Danielle Outlaw to Mayor Jim Kenney and District Attorney Larry Krasner among others to come up with a solution to the violence. A lot of community groups located in the places most challenged by the violence have been trying to come up with solutions of their own to try and make their neighborhoods safer. For the men of the Philadelphia Community Outreach Committee, it starts by making the block cleaner.

“Day in and day out, people see these blighted areas and the negative activities that go on there,” said Pete Wilson, a member of the group. “Seeing all of those blighted and abandoned properties creates a loss of hope.”

And bringing hope to neighborhoods in need of it is the purpose of the Committee, which is made up of Wilson, the 6th Ward’s Democratic ward leader, Ishaq Samai, an intake and resource coordinator for the city’s Office of Reentry Partnerships, Islam Sharief, who runs a non-profit, anti-violence program, retired postal worker Abdul Malik Ibrahim and retired painter, Khabir Rashid.

About six years ago, the men noticed that there was an open-air drug market operating at 43rd and Pennsgrove in West Philadelphia. All of the things that accompany such a space were happening on the block, trapping residents in their homes.

“The whole block was dedicated to drugs,” Samai said. ”Boom boxes were on at night. People were intimidated and scared to come out of their houses. There were prostitutes.”

“We began to work on that,” he continued.

And how they worked on it was by going directly to the source of the problem: the drug dealers themselves.

“We went eyeball to eyeball to these guys and let them know that [their activities] wouldn’t be tolerated,” Samai said. “Then, we started to work together to rid the community of blight. We cleaned up vacant lots and the good people in the neighborhood began to join with us. We had a fundraiser to get fencing to put around the vacant lots and to block the alleyways where the dealers would go to get away.”

While that sounds kind of reckless on it’s face, it wasn’t, Wilson said. They had the support of the Philadelphia Police Department’s 16th District. Elected officials gave them money and support. Members of the community allowed them to use their kitchens to cook dinners that they sold to pay for the fencing they used for the vacant lots and for the surveillance cameras that they put on the corners to let the dealers know that they weren’t welcome there.

They also had street knowledge, something they didn’t mind sharing with the corner boys, Samai said.

“We were cautious,” he said. “But we know the streets because we came from the streets. This is how we know the type of behavior and attitudes these guys on the corners have. We let them know that this is over, and that we won’t allow you to keep our children from coming out of the house. We won’t let you keep people from sitting on their porches by being out here smoking weed and using profanity. It has to stop.”

The group has not stopped there. A group of neighbors asked them to come and help them clean up Hawley Street, and the drug dealers are gone, replaced by a quiet block and surveillance cameras that have helped police solve crime in the neighborhood. Last week, they went to the southwest corner of 41st and Lancaster to work with neighbors there. Their efforts have led to fewer arrests on the blocks they’ve cleaned up, something that helps a cash strapped city like Philadelphia save money in terms of housing prisoners and police man hours, Samai said.

But most importantly, cleaning up those blocks have empowered the communities surrounding them.

“The stakeholders have helped us get the results,” he said. “It’s not just us, it’s the religious community. It’s elected officials. It’s [community development corporations] that have already existed. Once you galvanize them, and people see that they’re out there working with us, good people become less fearful. They come out and join us. They let the drug dealers know that there’s a new group looking out for the interests of the neighborhood.”