Who’s America Is This? 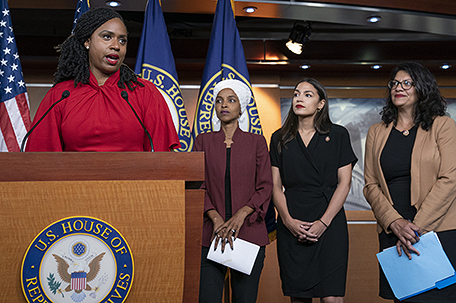 ABOVE PHOTO: The latest example of the conflict between patriotism, nationalism and free speech involves President Donald Trump and Congresswomen Ayanna Pressley (at the microphone) Ilhan Omar, Alexandra Ocasio-Cortez and Rashida Tlaib. The legislators have called out the president on his immigration policies, among other things. (AP Photo)

It’s not that Americans are less patriotic, it’s that only one type of patriotism is being deemed acceptable.

I love America more than any other country in this world, and, exactly for this reason, I insist on the right to criticize her perpetually.- James Baldwin

I’ve decided to begin my piece on the ways that racism and patriotism seem to have intersected thanks to President Donald Trump with two quotes that seem to put the contradiction that this has brought to the surface into sharp relief.

One thing that has always been consistent when we talk about America is the way that its contradictions tend to show themselves, especially when it comes to critiquing the country, who gets to do so, and who gets to decide that.

The truth is, the Constitution has already made the decision on who gets to critique America.

And in spite of the fact that this president has yet to meet a Constitutional amendment that he doesn’t want to completely ignore, he and his fans are just going to have to live with it.

One of the president’s current Twitter beefs is with Democratic Reps. Alexandria Ocasio-Cortez, Rashida Tlaib, Ayanna Pressley and Ilhan Omar over comments the four women —- who refer to themselves as “The Squad” —- have made about our current immigration policy, a policy that involves putting kids in cages and leaving them to sit in their own waste without food, water, and most importantly, their parents.

As part of this beef, he’s told the women that they need to “go back and try to fix the crime infested places” that they came from first. Granted, all but one of these women was born in America and all four of them came to Congress representing from American cities, but why strive for accuracy when you can go for good old, bare knuckle, racism?

And because this seems to be what Trump is best at, he also added some “othering” to his critique of the four women.

“I don’t believe the four Congresswomen are capable of loving our Country, said the one elected official we have that should really have his smartphone taken away. They should apologize to America (and Israel) for the horrible (hateful) things they have said. They are destroying the Democrat Party, but are weak  insecure people who can never destroy our great Nation!

Okay. Let’s talk about that.

Like I said earlier, one thing that America has really been consistent about is deciding that only certain people have the right to issue critique, despite the Constitution saying otherwise. For the folks in Trump’s mostly White, mostly rural base, Critiquing America While Black (or Latinx, or Palestinian, or an immigrant) is something that connotes ingratitude. How dare you criticize anything here after all we’ve done for you?!

(I don’t know that enslaving folks, making it so people have to leave their homes due to our tendency to start misguided military adventures and ignoring an entire island destroyed by a hurricane is anything to be grateful for, but hey…)

This is in spite of the fact that people of color have been willing to defend American policy, no

matter how ridiculous it is. According to a 2017 survey from the Pew Center, the military has

become more racially and ethically diverse as the country has. Racial and ethnic minorities now made up 40% of the nation’s active duty troops when the study was initiated in 2015. That was also the year when 44% of all Americans aged 18-44 were members of these groups.

Ironically, the number of Latinx folks who have decided to join the armed forces rose to 12%, according to the study. Many of these soldiers are undocumented immigrants who decided to fight for the country they called home. Sadly, the Immigrations and Customs Enforcement agency, a group that wears its disrespectful attitude on its sleeve, has been rounding these soldiers up for deportation on the orders of  “He Who Had Six Draft Deferments.”.

But military service aside —- my Dad was in the Army for 32 years —- one of the reasons I’ve always loved the James Baldwin quote that I started this piece with is because it asserts a right that all American citizens have — , the right to give our country some tough love, especially since it is through strong critique that things have actually gotten better in America traditionally.

And much of the best critique has come from groups that have been traditionally marginalized.

For example, when The Rev. Martin Luther King was campaigning for the civil rights of all, he often talked about the difference between patriotism and nationalism. Patriotism, he said, is reflected as a belief in the social system and values of the country, while nationalism is only interested in advancing national interests in the international order.

And yet, if his Twitter feed is any indication, nationalism is President Trump’s goal, it’s also something that all Americans have got to push back on, because it hasn’t worked when we’ve demanded this kind of fealty in the past. If you’re under 50 or blew off your history classes, go to the Google machine and punch in “McCarthy Hearings” to see what I mean.

A few weeks ago, just before the 4 th of July, I saw a study on the CNN.com website that showed that only 47 percent of Americans describe themselves as “extremely patriotic.”

Personally, I don’t think that’s as much about the relationship of most Americans to their country as it is the appearance of only a certain kind of patriotism —- a patriotism that’s mostly White, mostly Republican, swears unwavering fealty to Trump and sounds a lot like nationalism —- being considered acceptable.

Instead of just allowing that, it might be a good idea for us to start adhering to the view of Baldwin.

Our country may depend on it. Or at the very least, our sense of national identity.