When heartbreak and outrage isn’t enough 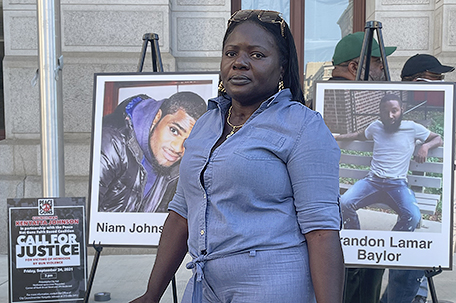 ABOVE PHOTO: Kimberly Kamara stands next to a photo of her son, Naim Johnson-Tate, at the Peace Not Guns Call to Action rally last Friday. Johnson-Tate was killed four years ago and Kamara has started a non-profit organization called NEEM (Never Ending E-Motions) to help people going through the loss of a child.

As she stood behind the podium in front of Philadelphia City Hall during the Peace Not Guns Call for Justice Rally last Friday, Yullio Robbins told the audience about the t-shirt she was wearing.

The shirt had a photo of Robbins’s son, James Walke 3rd on it, along with the day he was born and the day he died. Walke, 28, was shot to death in Germantown on Feb. 23, 2016. He was shot 12 times by an assailant that stood over him as he emptied his gun. His murder is still unsolved, and the pain is still fresh.

“I wear this shirt because my heart aches for my son,” Robbins said. “I’m so angry that this coward hasn’t been caught. I want my day in court so that I can look this coward in his face. He was my first son and he had so much life to live. I want [the shooter’s] a*% off the street!”

The rally, which was held the day before National Day of Remembrance For Murdered Victims, brought community leaders, religious leaders and families that have lost their loved ones to gun violence together to remember the lost and to demand a solution to the violence. Now more than ever, a solution is needed, said Councilman Kenyatta Johnson (D-2nd Dist.), chair of City Council’s Special Committee on Gun Violence, and the organizer of the event.

“When the blood is dried up and they take away the shell casings,” he asked. “What are we doing to address the issue?”

Because there is victimization on both sides of the gun, getting to the root of the problem is more complicated, said Bishop James Darrell Robinson of Yesha Ministries in South Philadelphia.

“The problem is so much deeper than what we understand,” he said. “The culprits, those perpetuating these crimes, are also victims; growing up in communities and living in environments conducive to the behavior that is happening. Family members have to deal with the aftermath and the children in the community are also dealing with mental problems due to the violence. We can’t play the blame game because we can all do better.”

Toward that end, Philadelphia NAACP President Catherine Hicks has pledged to help community groups come together by giving them a space to come and talk about ideas. From 10am-2pm on Fridays, the Philadelphia NAACP’s Philadelphia headquarters, 4458-B Germantown Ave., will be open for interested groups working toward stopping gun violence.

Through a concerted community effort, turning things around is possible, she said.

“It’s going to take the community coming back together,” Hicks said. “We did it before. We’ve had some rough times where we had to all come together, roll our sleeves up and take our streets back. And that’s what we’re going to have to do again. It’s going to take our community, our community leaders, our block captains…everybody knows their neighborhoods, and they know where the problem areas are. It’s important that we work together. The NAACP is here to partner with all of these organizations. We’re ready to do something.”

Last weekend, Philadelphia surpassed the 400-murder threshold for the second straight year thanks to two fatal shootings that occurred on the official National Day of Remembrance, which was Saturday. Over 1,600 people have been shot in 2021.

In a statement issued last Sunday via Twitter, Mayor Jim Kenney addressed the death toll and the pain of the families of those lost. “I am heartbroken and outraged that we’ve lost more than 400 Philadelphians to preventable violence this year. My heart goes out to all families suffering from enormous grief,” he said. “Our administration continues to act with urgency to reduce violence and save lives. I know most Philadelphians are rightfully outraged and frustrated by our city’s rise in violence. Please know, our administration takes this crisis very seriously. We are committed to working with all of our criminal justice & community partners to create a safer city for us all.”

But you’ll have to forgive Stanley Crawford if he’s not buying that. Crawford, founder of the Black Male Community Council of Philadelphia’s Families of Unsolved Murders Project, lost his son William to gun violence in 2018 when he was shot to death in front of his sister’s house as she and her son looked on. “The parents of those lost to gun violence have heard enough rhetoric, It’s time for some action. If Philadelphia can help people from foreign lands get settled into the city, they can put some real effort toward fixing the gun violence problem,” Crawford said.

“I’m not angry at the murderer,” he said. “I’m angry at city government. I’m angry at the mayor, the DA [Larry Krasner], and the [Police] Commissioner [Danielle Outlaw]. I’m tired of everyone who has the power to solve this and is sitting on their ass. I don’t give a s*%t about those Afghanis. I care about the Black community and the hurt they’re feeling. Once a person is murdered, you can’t bring them back. It’s time for these people to step up to the plate.”

So, What Is Your Plan?