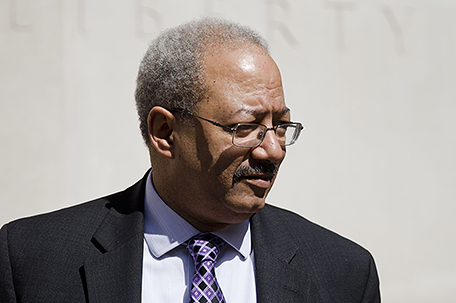 Congressman Chaka Fattah and former Deputy Mayor Herbert Vederman were very good friends. But did that friendship lead to bribery?

President Harry S. Truman once said that if you want a friend in politics, it’s best to buy a dog.

As the trial of Congressman Chaka Fattah moves into its third week, federal prosecutors focused on the congressman’s friends, how much he may have done for them, and how the ways they showed their thanks may have crossed the legal line.

Much of this week’s testimony centered on things that Fattah was alleged to have received from one of his co-defendants, lobbyist Herbert Vederman—money for Philadelphia University for his au pair, $18,000 for a car that sat in his garage despite being sold to Vederman on paper—that led to a job in the congressman’s office for a friend of Vederman’s a possible ambassadorship for the lobbyist himself.

Fattah and his co-defendants— Karen Nicholas, former CEO of the Education Advancement Alliance, former Fattah aide Bonnie Bowser, Vederman, and former Solutions for Progress CEO Robert Brand—have been indicted on a variety of charges ranging from conspiracy to money laundering connected to a $1 million loan that was allegedly taken out for Fattah’s 2007 Mayoral campaign and using educational grants from NASA and the Department of Justice to pay it back.

One of the week’s star witnesses was Alexandra Zionts, a lawyer from Florida who was given a $40,000 a year “special assistant archival officer” job with Fattah.

When Zionts, who is also Vederman’s longtime girlfriend, lost her job as a clerk for a magistrate court judge in Florida, she was 10 months short of getting a full federal pension. Because she was concerned about what a break in service would do to her pension, she went to Vederman for help in finding a new federal gig, she said.

She was interviewed by Fattah on Christmas Day and accepted a job in his office. It wasn’t her preferred option, she said.

“I had a 12-year-old daughter, so I wanted to stay in Florida,” Zionts said.

Once she got there, she worked on Social Security issues and a project that would create a Fattah archive at Temple University, Zionts said. She also said during cross-examination that she was often one of the first people in the office and one of the last to leave.

But prosecutors questioned how much time and work she actually put in and things got a little testy when U.S. Attorney Jonathan Kravis tried to pin Zionts, who testified under a grant of immunity from prosecution, down on that point.

“Work isn’t seamless,” she said. “I tried to answer [the investigator’s questions] as best I could. There were nine of you questioning me and you were all pointing fingers…”

Testimony is expected to continue on Monday.

Pay me what you owe me