What Becomes A Feminist Most? Part two 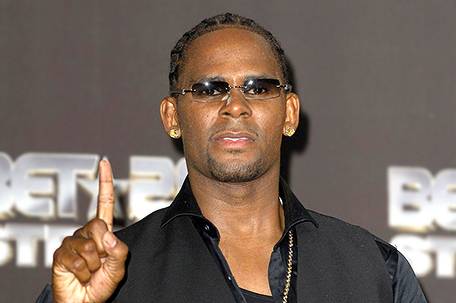 While I’m probably in the minority here, I’m a fan of Lady Gaga. In my opinion, she’s a pretty decent singer once you get past some of the crazy outfits, the meat dress coming immediately to mind, that she tends to mask her talent with.

I’m also a fan of Mary J. Blige. I like a lot of her stuff because it speaks to being comfortable in your own skin.

Now why am I bringing these two women up? I’m doing it because of their connection to the gentlemen pictured here, R. Kelly. He appears on a few tunes on Gaga’s new album and the two of them did a, well, interesting duet on Saturday Night Live, and according to Kelly, he and Blige are about to go out on tour.

Ladies, I can’t tell you what to do in terms of your careers, but you might want to reconsider. Especially you, Mary J.

In my opinion, one of the most important things that we as feminists should be doing is making sure that our daughters are protected. While that may be a new idea to some, for others it’s a longtime policy. There’s an attorney named Gina McCauley who started a blog called “What About Our Daughters?” and has been known to go for the mattresses whenever young Black girls and women are threatened. There’s also folks like Sabrina Lamb, who got the folks at the Oxygen cable network to change their minds about a show called “All My Baby’s Mamas” featuring a rapper named Shawty-Lo and his band of baby mamas, by protesting, getting media attention, and showing the show’s advertisers the error of their ways.

But sometimes, feminists, even feminists of color, drop the ball. When Shirley Chisholm became the first woman to run for president, she was a woman alone. Unlike Hillary Clinton, whose partisans went so far as to say that Black journalists on the campaign trail were so in Barack Obama’s pocket that they received marching orders from the Obama Campaign via telephone every morning when he ran against the former Secretary of State for the Democratic Presidential Nomination in 2008, Chisholm was attacked on all sides with no support from the troops. When Michelle Obama was called a “baby mama” on Fox News, “fat” by Rush Limbaugh, and became the subject of a number of gorilla pictures by various right wing groups, the silence from feminists on her behalf was also quite deafening.

While everyone was giving far too much thought to Beyonce’, and her new crew of Feminist Beyhivers, I noticed a story from the Village Voice on my Facebook news feed. The story, done by Jessica Hopper, was an interview with Jim DeRogatis, the reporter that broke the story of what i’ll call R. Kelly’s Young Girl Problem.

While the subject matter caught my attention, I found the 11 times that the story had been shared by my Facebook friends even more interesting. When 11 folks in my circle of friends, a circle that includes journalists, activists, business people and even a few former pro athletes, are sharing the same article, it’s important. The number of share-ers has gone up since then.

And between the story itself, the legal documents, and the Chicago Sun-Times stories that had to be pulled off of Lexis-Nexis because they’re no longer a part of the newspaper’s archives, I made a decision. If you want to call yourself a feminist of any color in my presence, you’d better not be playing music from R. Kelly when you do it. I’d better not see a copy of Black Panties on your I-Tunes playlist.

That’s because we feminists let these girls down. Let them down hard. And I say this because this guy still has a career. If you’re gonna call yourself a feminist around me while dancing to “Step In The Name Of Love”, I’m going to invite you to go to Wrigley Field in Chicago and take as many seats as humanly possible.

The first that we as music listeners heard about Kelly’s proclivities was when Vibe magazine published a copy of the marriage license that he had gotten for himself and the late pop singer Aaliyah. The only problem with that is that at the time, Aaliyah was only 15 and Kelly was 27…

But a fax came to DeRogatis desk at Chicago Sun-Times that said that Kelly had been under investigation by the sex crimes unit of the Chicago Police for two years in connection with allegations that the singer had been going to his former high school and picking up young girls. He’d let them spend time in the studio with him or go to an event with him, and in exchange, he expected sex.

The videotape that featured Kelly relieving himself in a young girl’s mouth was on every bootlegger’s table in 2003. So we all knew about that and I even know a couple of people who’ve seen it.

One of them was forced to have an abortion. Another was so traumatized that she tried to kill herself.

All of them were young, Black girls. Girls who were probably told that if they said anything, they wouldn’t be believed.

The sad thing is, I can’t say that they were wrong to think that.

What’s always disturbed me about this case was the willingness on the part of the Black Community to blame the victims. These girls were “fast”, as my Mom would put it. They knew what they were doing. They weren’t “really kids”. People need to let R. Kelly alone and let him live his life. They’re just hatin’…

It’s kind of heartbreaking to hear that kind of stuff when it comes to young women of color. But it wasn’t unexpected. My guess is that most of the female Children of the Corn I used to teach were young girls who got pregnant with the babies they were far too young to raise by someone who should have been told a long time ago that 15 gets you 20…

DeRogatis got that too. ”The saddest fact I’ve learned is: Nobody matters less to our society than young black women. Nobody,” DeRogatis said. “They have any complaint about the way they are treated: They are “bitches, hos, and gold-diggers,” plain and simple. Kelly never misbehaved with a single white girl who sued him or that we know of. Mark Anthony Neal, the African-American scholar, makes this point : one white girl in Winnetka and the story would have been different. No, it was young black girls and all of them settled. They settled because they felt they could get no justice whatsoever. They didn’t have a chance.”

Now I hope to never have to say this again, but here it is: There is no such thing as a 15-year-old girl who deserves to be violated in the way that R. Kelly violated these girls. It doesn’t matter what color the girl is. It doesn’t matter how old she looks. She’s still 15. If you’re over 16 and you’re pushing up on a 15-year-old school girl, that is wrong. You are wrong. You shouldn’t be doing concert tours. You should be doing time.

And yet, R. Kelly walks free. There’s nothing that we can do about that because the legal system of the City of Chicago has spoken. Kelly was tried and found not guilty of 14 counts of Child Pornography in 2008. (He was never tried for the rapes.)

I’m sorry, but that’s just plain unacceptable to me.

So I say to my fellow travelers in the Feminist Tribe, do you think that you can apply the considerable energy you’ve spend discussing whether or not Beyonce’ is a feminist into trying to get some justice for these girls, even if it’s symbolic?

Because you see, we owe them that. And the note has been overdue since 2008…

What Becomes A Feminist Most? Part one