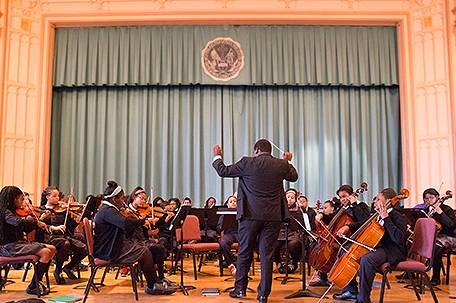 ABOVE PHOTO: POP students as St. Francis de Sales prepare for their concert with Orchestra 2001 and Anthony McGill.

Student musicians from Play On, Philly! (POP) at St. Francis de Sales School in West Philadelphia and Freire Charter Middle School in Center City, will premiere their first student-composed work,  “Symphony in the Key of Unity,” as guests of Orchestra 2001 in the New Music Celebrations of the Life of Dr. Martin Luther King, Jr. concert on January 26 at Swarthmore College.

Several members of Orchestra 2001 will play side-by-side with the POP Symphony Orchestra. The POP Wind Ensemble will also perform Sheridan Seyfried’s “Fanfare for Winds,” commissioned for the occasion.  The concert is a reprise of a concert held this past Saturday, January 18 at the Kimmel Center.

Anthony McGill,Principal Clarinet of the Metropolitan Opera Orchestra will also join the students in a spiritual medley. McGill, a graduate of the Curtis Institute of Music, performed with Yo-Yo Ma and Itzhak Perlman at President Barack Obama’s first inauguration and is one of the finest solo, chamber and orchestral musicians in the world.

Over 200 Play On, Philly! students, grades K – 8, partake in group instrumental lessons, as well as music theory, choir, chamber music and orchestra every school day afternoon for up to three hours.

The tuition-free, three-year-old program, which uses musical training to develop the cognitive, academic and social skills needed for success, is offered to students who would not otherwise receive music education. The composition class at POP’s St. Francis de Sales site created “Symphony in the Key of Unity.”  POP was founded and is chaired by Wayne resident, Carole Haas Gravagno.

Orchestra 2001 commissioned local composer and Curtis Institute instructor Richard Danielpour to write “From the Mountaintop,” a new clarinet concerto based on the final year of Dr. King’s life and dedicated to civil rights leader Andrew Young,” said Orchestra 2001’s Executive Director Adam Lesnick.  “I originally planned to have the POP students join us as audience and observers, but we are excited that this grew to include them as performers and even budding composers. It will be a wonderful experience for them to meet Messrs. Danielpour and McGill and to play alongside our musicians and Mr. McGill.”

The Orchestra 2001/Anthony McGill collaboration is just one of many opportunities for POP students to share their newfound skills.  “Ongoing jazz concerts, experiments with music and technology, as well as collaborations with professional, collegiate and student orchestras, guest artists, conductors and composers encourage POP students to go outside their comfort zones and set their sights high,” said POP Program Director Kathleen Krull.  “This is the second time our students have performed in Lang Concert Hall,” she added.  “Last season we benefitted from a partnership with the Swarthmore Music Department and held our Spring concert here.  We are delighted to be back.”

Orchestra 2001’s Martin Luther King celebration focuses on new music. In addition to the Danielpour premiere, and POP music, the program will also include Jennifer Higdon’s “Celebration Fanfare” and a new work for gospel choir and orchestra by Jay Fluellen.

The concert is free and open to the public.  A pre-concert panel will take place at 2:30 PM and a reception will follow the concert.