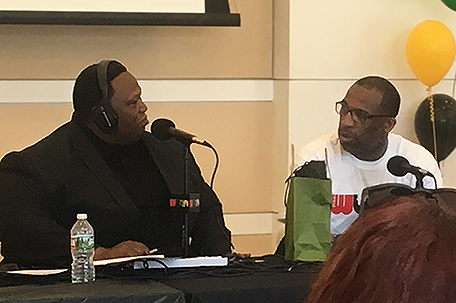 ABOVE PHOTO: 900 AM WURD host Nick Taliaferro, talks with Anthony Wright and his son, Anthony Jr., during a live broadcast from the radio station’s Founder’s Day celebration at the Free Library of Philadelphia. (Photo by Denise Clay)

Now that he’s been exonerated of a crime he didn’t commit, Anthony Wright is moving forward with his life.

Anthony Wright is an Apple guy, meaning he, like many of us, has an iPhone.

Like many people in their mid-40s, he’s trying to figure out how to operate it, with the help of the youngsters in his life.

“I have nieces who are on social media that are helping me figure out the technology on my cell phone,” Wright said. “My 1-year-old granddaughter knows this stuff too.”

If it were anyone else, Wright’s story of a middle- aged man trying to figure out his new phone wouldn’t be remarkable.

But because the man at the other end of the iPhone is learning this technology during the first week of the rest of his life makes it so.

For 25 years, Anthony Wright was in jail for a rape and murder he didn’t commit. Last Friday, radio station 900AM WURD welcomed Wright back to the neighborhood during the station’s annual Founders Day, which honors Dr. Walter Lomax, the station’s founder.

Seated at a table in the Skylight Room of the Free Library of Philadelphia, Wright was with his son, Anthony Jr., sharing the story of how he was released from prison and the people who helped him.

In 1991, 77-year-old Louise Talley of Nicetown was found raped and murdered in her bedroom. She had been stabbed several times.

Police found a bloodstained sweatshirt, which they believed to be Wright’s. Since DNA testing was in it’s infancy, and police had a confession that Wright contended was coerced, the District Attorney’s office went to trial and he was convicted.

But he never gave up on proving his innocence, Wright said. He wrote to the Innocence Project at Yeshiva University’s Benjamin N. Cardozo Law School in New York, and after a five-year wait, he found out that they would take his case.

It then went to attorneys Sam Silver and Rebecca Lasher. The duo successfully got a new trial and won the trial thanks to DNA evidence that showed that Wright was innocent.

Walking out of the courtroom a free man was the happiest moment of his life, Wright said, even if some of the attention he’s received since has required some adjustment.

“It’s been a little overwhelming,” he said. “But I have a great support system.”

Now, the rest of Wright’s life is in front of him. During Founder’s Day, he was given several gift certificates, including one for dinner at all of the Bynum Brothers restaurants (South, Warmdaddy’s, Relish), Smooth Like That clothiers, Leo’s, and Brown’s Shop Rite, which has also offered Wright a job interview. As a newly registered voter, he’s even going to be voting for the first time ever this year.

For Wright, it’s a new beginning that has been a long time coming.

But for Wright’s son, Anthony Jr., who was 4-years-old when his father was arrested, it’s proof of what happens when you have faith.

“It’s amazing,” he said. “I can’t take my eyes off of him. My grandfather told me to keep believing, so I had faith.”