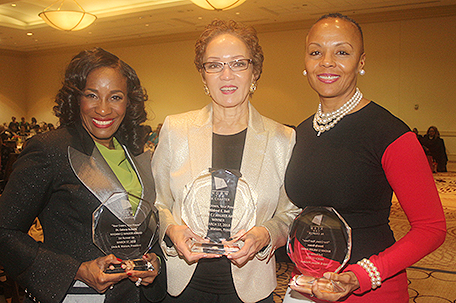 While Madame C.J. Walker is best known for making her fortune through such inventions as the straightening comb, and various conditioners and pomades, she also made it a point to show women how to conduct business and become financially independent.

With the theme of “Your Crown, Your Power”, the sold-out event helps the Coalition finance the various programs it does throughout the year, programs that include college tours and scholarships, said Darisha K. Parker, CEO of the Darishamedia public relations firm and a member of the group.

The morning began with an economic empowerment seminar hosted by KYW-1060’s Cherri Gregg. Among the speakers sharing their expertise were Iola Harper, the City of Philadelphia’s deputy commerce director for the Office of Economic Opportunity and Melinda Emerson of the Quintessence Group. 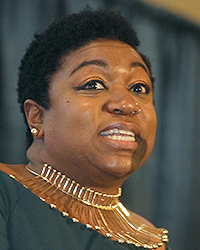 The speaker for the luncheon and Madame C.J. Walker Awards program was Deesha Dyer, the former social secretary for the Obama White House, who is now the co-founder and executive director of BeGirl.World, a program based here in Philadelphia whose mission is to empower girls to travel and see the world.

The winner of this year’s Madame C.J. Walker Award, which is given to an entrepreneur who is also involved in the community, went to Mildred E. Bell, founder and president of Skin Health Solutions LLC. She was honored for starting a family business that manufactures skin-care products while also being a patron of the arts.

First runner-up for this year’s award was Dr. Colona Roberts, founder of The Smart Center of Child Development and Education and second runner-up was Beverly Brown, president of Temples In Shape LLC.

The winner of this year’s PECO Power In The Community Award was Syreeta Scott, the owner/operator of Duafe Holistic Hair Care and the Sable Collective.

There were also several scholarships awarded. This year’s scholarship winners were Lauryn McCray, a senior at the Agnes Irwin School; Bria Miles, an undergraduate student at Winston-Salem University; and Cimone S. Philpotts, a doctoral student at the University of Delaware.