‘We Shall: A Lyrical MLK Celebration’ at The Museum of the American Revolution, Jan. 19 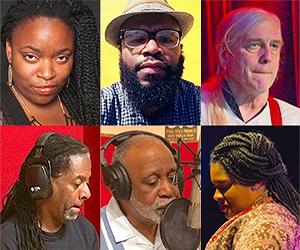 ‘We Shall: A Lyrical MLK Celebration’ is an engaging intermingling of spoken word, singing and instrumental music, will be held at The Museum of the American Revolution, 101 S 3rd Street, at 3PM; paying tribute to one of America’s greatest citizens and thinkers, Rev. Dr. Martin Luther King Jr. Utilizing brief excerpts from King’s speeches and sermons as inspiration and a combination of gospel, jazz and blues music, this piece explores the inner workings of a mind and body in struggle.

MEMBERS OF THE ENSEMBLE:

Kendrah Butler-Waters is a pianist, composer, violinist, and vocalist from the outskirts of Philadelphia. She holds a dual Bachelor’s degree in Political Science and Sociology from Temple University and in Elementary Education from Drexel University. Kendrah has been a featured artist on radio station WRTI and her music is on current rotation. She has been a music director for the Philadelphia Jazz Project, a Jazz Artist in Residence (2015-2016) with the Kimmel Center for Performing Arts, the pianist for the entire National Black Catholic Congress in Orlando. She has performed on both domestic and foreign soils, and most recently performed with actor/director LeVar Burton for his “LeVar Burton Reads” tour. This Spring, Kendrah will be releasing her first solo album, titled “Faith Walk”!

Kareem Chappelle who performs under the name Kareem Idris is a world traveling social worker, educator and performer. He has worked in the Mental Health field for the past 12 years. He has worked populations with diagnosis ranging from Autism Spectrum Disorder, Bipolar Disorder, ODD, and ADHD. His current position is case manager for the Focus on Fathers Program via the Health Promotion Council at the Public Health Management Corporation. Fluent in Arabic, Chappell has served as an English professor in Mecca, Saudi Arabia, and in Cairo, Egypt. Currently Chappell, an initiated priest in the Yoruba/Lukumi tradition, Kareem Idris utilizes his experience and expertise to create a bridge musically and a platform of awareness and healing through words to positively impact the listener and utilize music as a therapeutic tool.

Jocko McNelly is a multi-instrumentalist, composer, arranger and teacher. Though he considers blues and soul Music to be his “base camp,” he takes great joy in covering a range of styles: jazz, R&B, calypso, reggae, Afro-Cuban, country, bluegrass, and various styles from Brazil and Africa, Arab and Jewish music, along with European classical music. He has performed with such diverse talents as Billy Eckstine, Lou Donaldson, Phyllis Diller, Archie Bell, A House of Freaks, the Richmond (Va.) Symphony, Carter Beauford and Tim Reynolds. Since 1981, Jocko has been teaching in colleges and universities, both in the classroom and to instrumental students of bass and guitar. Former students have gone on to work with national acts including Herbie Hancock, Widespread Panic, Duke Robillard, and the SNL Band.

James Solomon is a Philadelphia songwriter who began his career in the mid 1960’s working with singer Eddie Holman. In 2017, he collaborated with Alfie Pollitt and Walter Sorey to create the Juneteenth song, “No Longer Bound.” Solomon has contributed songs to several Philadelphia Jazz Project productions including “The Philly Song Book,” “Love Notes,” “Feathers, “Celebrating Ted Curson & Bill Barron” and more recently “The John Henry-Sounds Of Progress Suite.” James Solomon worked for 20 years as a claims representative for the Social Security Administration. As a claims representative, he took several disability claims daily and learned first hand through extensive interviews how wide spread and debilitating any number of illnesses can be. James Solomon is a co-producer of the Remedy Project Mixtapes.

Toby VEnT Martin is the lead singer and lyricist of VEnT, an alternative rock/soul band from Philadelphia. While VEnT has many great influences, their sound is unparallel to anything the industry has heard. VEnT fuses soul with alternative rock, while dabbling in acoustic rock, jazz, funk, contemporary Christian, R&B, soft rock, gospel and  other genres. VEnT has opened for artists such as Marsha Ambrosius, Syleena Johnson and Monifah and has sharied the stage with other great performers. VEnT currently has three albums: “Out the Box” (2010), “Beautifully Broken” (2011), and “Just Leftovers” (2012). VEnT has performed at many venues in Philadelphia, New Jersey and Delaware, as well as numerous venues in Connecticut, Chicago and New York.