“We rely on each other…” 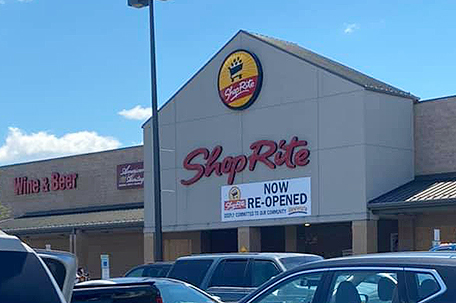 ABOVE PHOTO: The reopening of the ShopRite Parkside store (Photo: Facebook)

As he stood outside the ShopRite at Parkside in West Philadelphia, Zakariiyya Abdur Rahman, owner of Z and Z Distributors, was happy to see the doors open and people streaming inside to shop for everything from fresh vegetables to a good Cabernet Sauvignon.

Rahman distributes the Rap Snacks brand of snack chips and considers the ShopRite  as one of the best places to supply a community that at one time couldn’t attract a grocery store.

Which is why he was sad to see looters tear it apart last week as others protested the death of George Floyd at the hands of Minneapolis police.

On Monday, owner Jeff Brown held a grand re-opening celebration at the ShopRite of Parkside to say thank you to the people, whose vested interest in seeing the grocery store at 52nd Street near the intersection of Jefferson and Parkside was accompanied by a lot of hard work.

The other store that was hit by looters — the ShopRite on Fox Street in North Philadelphia — reopened last Friday.

“It took us a week to put it together,” Brown said. “There was a tremendous outpouring from everyone I’ve worked with over the years and we made it happen.”

About 200 volunteers joined the store’s 300 employees to help with the cleanup, Brown said. There was also help from vendors like Rahman and Wakefern — ShopRite’s parent company — to get the Parkside store up and running, he said.

When the store opened 17 years ago, it was the result of a group of people trying to solve a problem in this West Philadelphia neighborhood,” said State Sen. Vincent Hughes.

So all of the community’s stakeholders — elected officials, community leaders, and residents — got together and decided that with the help of state, local and federal dollars, a grocery store would be built here because just like your educational prospects shouldn’t be determined by your zip code, what goes on your table shouldn’t either, Hughes said.

“We put in city dollars, state dollars, and federal dollars on this idea that fresh food should be available for every neighborhood, no matter what your circumstance is,” he said. “And those investments showed the model of how you set up retail complexes that don’t just provide a service but do well financially. This gives us the chance to tell that story again.”

But even with all that history and community service, Brown’s store found itself in the path of looters two weeks ago. Because of the time he’s spent in this section of West Philadelphia, he was less disappointed in the looters than he was the response of the Philadelphia Police department.

The anger he understood.

“Yes, at first, you ask why,” he said. “I feel we’ve worked so hard to do the right thing, so why this store, that has such a long history of doing things the right way? But sometimes, the person who’s closest to you feels the brunt of your bad day, or your anger or your frustration. And I’m here in the neighborhoods. Others are not. So, I think it was a matter of I was accessible to a neighborhood with a lot of young people who were hurting and very angry.”

In fact, the thought of being less accessible, or of leaving the neighborhood, never occurred to him, Brown said.

“I have a long and loving relationship here,” he said “We rely on each other and we work together. We’ve been here for 17 years. My investment in this neighborhood goes way beyond…I’m not going to leave.”

In addition to thanking the shoppers for helping him rebuild, Brown also announced the creation of the Pennsylvania 30 Day Fund, which provides grants to small businesses that have been hit hard by the coronavirus pandemic shutdown, that might not be eligible for federal or state loans or grants, and need financing quickly.

The fund, which is a collaboration between Brown and real estate developer Jeffrey Bartos, will give businesses a $3,000 forgivable loan. It is also making funds available to small business owners who were impacted by looters.

It was an important thing to do because if the area was going to recover, it needed more than just a grocery store, Brown said.

“I didn’t want to be the only business open,” he said.

One of the businesses that got a grant was What A Crock, a small business that makes chef-prepared meals designed for your slow cooker. Brown also helped his business, which has been going since 2016, in other ways, said Na’Kwai DeShields, the owner of What A Crock.

“[Brown] also gave me a space to put my products in this store,” he said excitedly.