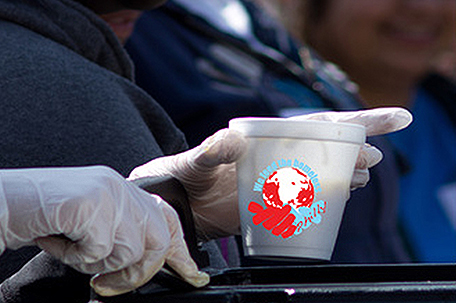 Craig Stroman, founder and CEO of We Feed The Homeless Philly, is a really busy man right now.

While the Crystal Tea Room in the Wanamaker Building is a grand space that would make any event special, a lot of finishing touches need to be put on before the third annual We Feed The Homeless Black Tie Event, which will be held from 5 PM to 10 PM on Sunday, June 22.

The process of putting together this year’s benefit, a concert featuring Raheem DeVaughn, Eric Roberson and D.J. Jazzy Joe and hosted by 100.3 The Beat’s Tiffany Bacon, takes Stroman about six months to put together.

The proceeds from the benefit, help WFTHP feed the homeless at St. Phillips Baptist Church at 16th and Girard on Tuesdays and at 18th and Vine on Saturdays, Stroman said.

But, in the words of the Blues Brothers, he’s on a mission from God, so the time is time well spent.

“I had a ‘come to Jesus’ moment,” Stroman said. “In 2010, I was coming to work one day and when I came off of the expressway I saw a family in a tent after a snowstorm. I saw a little girl walking out of the tent. I used to be one of those people who ignored homelessness, but after that, I asked God ‘What can I do? What should be my mission?”

His mission has become helping those who society sometimes ignores get the strength they need to move forward with their lives.

“There are stories behind homelessness,” Stroman said. “I was talking to a 70-year-old man who lost his wife and because of that lost all will to live. He eventually lost his job, his home, his pension and everything else. The perception is that homeless people are drug addicts or just lazy and don’t want to work. That’s not the case.”

The organization has served 50,000 meals during it’s three years of operation, Stroman said. But its hoping to use some of the money raised on the 22nd to do something equally important.

“We were out feeding people one day and I asked them if anyone had a high school diploma,” Stroman said. “Out of the 200 people in that line, only five people raised their hands. Without education, what can you get?”

So the plan is to expand what We Feed The Homeless Philly does to include helping people get the skills they need to help themselves, Stroman said.

“It’s about teaching people how to fish,” he said.

All of the VIP tickets for We Feed The Homeless Philly’s Black Tie Event are sold out. But you can still be a part of the fun. General admission tickets are $75 and are available by calling Malaika Guest at 267-269-1166. You can also purchase tickets until 10 a.m. on June 22 by going to the group’s website: www.wefeedthehomelessphilly.org.

Among the sponsors for this event are Brown Family Shop Rite and Wells Fargo. If you can’t make it to the event, but would still like to support the work of We Feed The Homeless Philly, you can send checks or money orders to We Feed The Homeless Philly, P.O. Box 36606, Philadelphia, Pa. 19107. You can also donate via PayPal on the group’s website.

Having A Good Time Helping Others

Dressing Up For Dinner