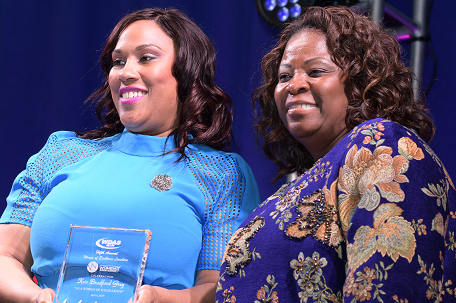 The 2019 WDAS Women of Excellence Luncheon was a hugely successful, sold out affair held last Saturday at the Philadelphia 201 Hotel. This was the fifth year for the popular event, which was presented by Gwynedd Mercy University.

Philadelphia’s own Grammy award-winning rapper Eve was honored as part of a group of outstanding women who have made exceptional contributions to their community.

Eve — who is also a songwriter, actress and co-host of the daytime CBS TV Show “The Talk” — was this year’s recipient of the “Trailblazing Woman of Excellence” award.

With her family in attendence, she was visibly emotional and moved to tears when Derrick Corbett, director of urban programming for iHeartMedia Philadelphia and WDAS radio personality Patty Jackson, presented her with the award.

The iconic Mary J. Blige was the first recipient of this award, followed by Patti LaBelle, Susan Taylor and Queen Latifah.

Brown was totally surprised and delighted to be recognized for her amazing 40-year career by Corbett.

All of the honorees were incredibly gracious, looked fabulous and made heartfelt remarks when accepting their awards.

I had an opportunity to speak with two honorees that I‘ve had the pleasure to know and admire personally for some time – Renee Chenault Fattah and Jenice Armstrong. I asked them both to share what this honor meant to them.

“This is such an honor! WDAS has always been an important voice in our community with a long history of service,” Chenault Fattah remarked. “We all know the important role the station played at pivotal times during the Civil Rights Movement – a trusted beacon of information.

When I came to Philadelphia for law school in 1979, it was right around the time Tony Brown and his Quiet Storm hit the airwaves, providing so many hours of enjoyment.

When I returned to Philadelphia in 1991 to work at WCAU — now NBC10 — Patty Jackson was one of the first to interview me and introduce me to the community. She must have been all of 10 years old — but even then, she was a pro!”

“This luncheon has a tradition of honoring amazing women, and I am thrilled to now be in their company,” Chenault-Fattah continued. “But it’s pressure! Past recipients are continuing to do amazing,things-scaling new heights of excellence. These sheroes are not resting on their laurels. Every day, they excel and make a positive impact. With God’s grace and my passion, I promise to do the same.”

“I am honored and excited at being selected a 2019 WDAS-FM Women of Excellence honoree,” Armstrong said. “At a time when a sitting U.S. president calls what we do “fake news” and refers to us as “the enemy of the people,“ this kind of recognition is especially appreciated. It means that people know he is lying and that they value what we do.”

Everyone was absolutely thrilled with performances by recording artists Brian McKnight, Pastor Marvin Sapp and Raheem DeVaughn. There was mighty love for all of these headliners.

It felt like church, and the tissues came out when Pastor Marvin Sapp sang “Never Would Have Made It.” The affable Carla Ferrell of The Steve Harvey Morning Show also made a special guest appearance.

Congratulations to all of the incredible honorees and WDAS.  A special welcome is extended to Adimu Colon, the new host of  “Quiet Storm.” Best wishes to the legendary Tony Brown, whose smooth voice and musical selections entertained us for many years!

It was another great time to be “All Around Philly.”

WDAS Women of Excellence Luncheon, the inspiration we all need