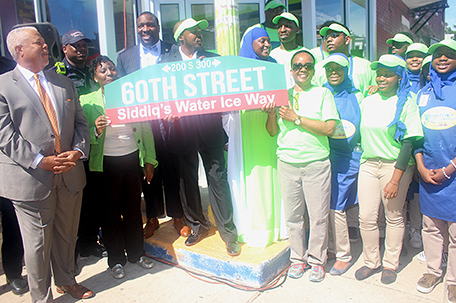 ABOVE PHOTO:  Saddiq Moore shows off the new street sign in his honor. State Sen. Anthony H. Williams, State Rep. Joanna McClinton and Councilman Kenyatta Johnson are to the left; his wife Shariea, his mother Peggy, and Saddiq’s employees are to the right. (Photo: Robert Mendelsohn)

For the last 22 years, if you wanted Saddiq’s Real Fruit Water Ice, you had to either be at an event or on Temple University’s main campus. Now, you can get it at a brand new store in West Philadelphia.

As he stood in front of his new store on South 60th Street in West Philadelphia, Siddiq Moore took pictures with crowds of people while holding a street sign.

The sign, which will go up along the street where the Siddiq’s Real Fruit Water Ice is located at 264 S. 60th St., will rename that area “Siddiq’s Water Ice Way.”

On a day where a lot of his dreams were coming true, this was a bonus.

“I’m really honored,” Moore said. “Most people don’t get [a street named after them] and live to talk about it.”

On a day tailor made for water ice, hundreds came to Siddiq’s Real Fruit Water Ice for a taste of his award-winning confections. In addition to the water ice, patrons patiently waited in lines that stretched up the street to get pretzels, gelato, funnel cakes, Belgian waffles and other treats.

There were also activities for the kids including face painting and a moon bounce.

For 22 years, Moore has operated a cart near the Howard Gittis Student Center on Temple University’s main campus. He was inspired to start that business by watching men like Sheik Shakri Beyah operate businesses like the Garden of Bilal restaurant on Wadsworth Avenue. 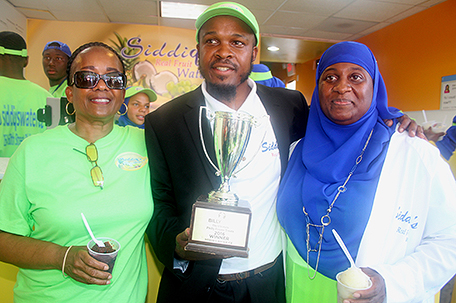 By watching what men like Beyah did, he learned how to not only gain customers, but also how to keep them coming back, Moore said.

He hopes to be the kind of role model to the young people in this section of West Philadelphia.

“I want to give something back to the community,” he said. “I’ve been inspired by others, so I want to provide that inspiration. I want to show the young people around here that anything is possible.”

While Moore’s water ice had always been popular among Temple students, being named the city’s best confection was the result of winning the Ultimate Frozen Treats competition, sponsored by the website Billy Penn.

The March Madness-style competition sponsored by the Billy Penn website that pitted the water ice, which does have chunks of real fruit in it, against such famous names in water ice as Rita’s, which are every where, and John’s, which is located in South Philadelphia.

Ultimately, Saddiq’s beat out the ice cream at Franklin Fountain, and the gelato at Capogiro to take the crown.

While he might expand his empire at some point beyond the cart at Temple and his new storefront, Moore is going for quality rather than quantity.

He compared it to Dunkin’ Donuts and Starbucks. While there may be more Dunkin’ Donuts locations around, just as there are more Rita’s Water Ice stores, people go to Starbucks when they want a quality cup of coffee.

“I want to be the Starbucks of water ice,” he said.