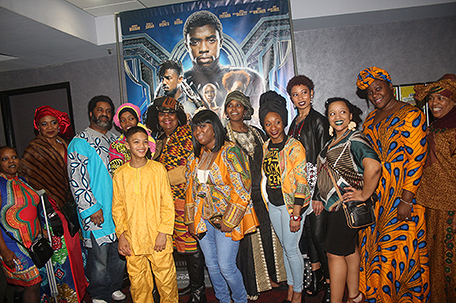 ABOVE PHOTO:  Showing up and showing out at the Marvel “Black Panther” opening, patrons of all ages were excited to see the new cinematic extravaganza dressed in their African fashion finery.  (Photo by Robert Mendelsohn)

As they rushed across the street to get to the Warmdaddy’s restaurant on Delaware Avenue last Friday, Trudy Booker and Patrice Williams of Wynnefield were excited.

The pair were on their way to a Happy Hour at Warmdaddy’s, followed by a screening of the movie “Black Panther” organized by author and activist Mister Mann Frisby. In addition to drinks, munchies and a chance to talk about the film, there was also a costume contest and a musical performance from Tanqueray Haywood, who sung “Lift Ev’ry Voice and Sing,” also known as the Negro National Anthem.

For the most part, the superheroes who made their way onto television and movie screens were White and male. While “Wonder Woman” gave little girls a superhero they could identify with, there wasn’t much for kids of color, the woman said.

“Now there’s a Black superhero for our kids to relate to,” she said. ‘This is a night for celebrating where you come from and where we’ve gone as a people.” 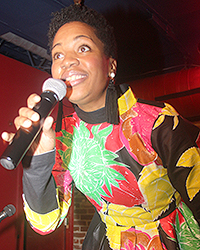 “Black Panther”, the latest entry in the Marvel Cinematic Universe, and the only one featuring an almost entirely Black cast that included Chadwick Boseman, Michael B. Jordan and Oscar-winner Lupita Nyong’o, opened to rave reviews and record-setting box office numbers on Friday.

That the movie managed to do so well financially wasn’t a surprise to Frisby. When he began organizing this outing, he saw for himself how enthusiastic people were about the film.

“The first show sold out so quickly,” he said. “I wasn’t surprised because there was so much excitement when [Black Panther] was announced. It’s been like a pep rally. Everyone is walking around on Cloud Nine over this film.”

Part of the reason for this is because “Black Panther” gives us a chance to see Africa in a way that it hardly appears on film, Tiffany Bacon, a Philadelphia-based actor and radio personality, said.

“This is a game changer,” she said. “[Black Panther] doesn’t portray Africa like it’s an ad for UNICEF. It shows the continent in all of its complexity and doesn’t treat it like it’s all one country.”

Another way in which it might be a game changer is in how it continues challenging what Hollywood has traditionally thought about films with mostly Black casts, according to Patrick Riley, a New York-based entertainment reporter.

In addition to the film’s domestic business and the fact that filmgoers are going to see it more than once, the film opened at number one in most of the 48 territories outside of the United States and Canada where it opened, continuing a trend set by “Girls Trip”, “The Fate Of The Furious” and the Oscar-nominated “Get Out”, of hit films with Afrocentric leaning subject matter that have gone on to international renown, Riley said.

There was a lot that the people in charge of marketing “Black Panther” did right, Riley said.

“Disney and the Marvel team did what Hollywood hasn’t yet done successfully– allow the creation of a project that reflects diversity – or a lens uniquely coded from the norm, give it the Tom Cruise-style marketing machine and the playground of an international open, and see “Black girl magic” and “Black boy joy” happen – all the way to the bank,” Riley said.

It also doesn’t hurt if the product is good, Frisby said. After sending movies like “Exodus: Gods and Kings” that told stories based in the African continent starring White actors with very British accents down to defeat via social media, Black moviegoers are serving notice through “Black Panther” that if you build it, and it’s good, they will come, he said.

But what does this look like long-term for the stories of marginalized communities in general and the Black community in particular?

The picture may become clearer on March 9th when “A Wrinkle In Time”, the latest from “Selma” director Ava DuVernay that stars Oprah Winfrey, Reese Witherspoon and Mindy Kaling hits the multiplex.

But even if that’s a success, consistency is going to require maintenance. While it’s important to make sure that producers, directors, actors and craftspeople from marginalized communities are given the budgets and faith to produce projects like “Black Panther”, the community is going to have to hold up its end of the bargain, Riley said.

“The people who say they want to see more of themselves [in films] have to organize and go out to support these films – adding all of the additional community and give-back components that the campaigns will allow,” Riley said. ”It’s a discipline. And we must all stay in the flow to see this level of excitement about diverse cinema continue.”