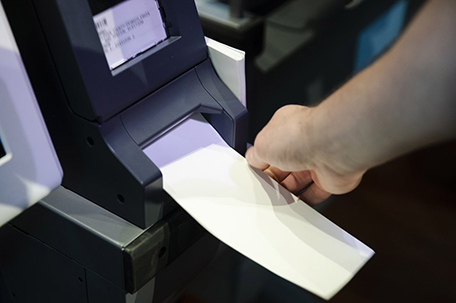 ABOVE PHOTO: An Investigator with the Office of the City Commissioners, demonstrates the ExpressVote XL voting machine at the Reading Terminal Market in Philadelphia. Legislation heading toward a vote in Pennsylvania would overhaul some aspects of how voters cast ballots while delivering much of the money counties need to buy voting machines ahead of next year’s presidential election. (AP Photo/Matt Rourke, File)

HARRISBURG, Pa. — Legislation unveiled last Monday would overhaul some aspects of how voters cast ballots in Pennsylvania while delivering much of the money counties need to buy voting machines ahead of next year’s presidential election.

The measure that emerged after several months of closed-door negotiations between Democratic Gov. Tom Wolf and leaders of the Legislature’s Republican majorities would let any voter mail in a ballot, eliminate the ballot option for straight party-ticket voting and move voter-registration deadlines closer to elections.

It is part of a deal to approve $90 million in aid for voting machines that Wolf wanted counties to buy, a move he had framed as bolstering Pennsylvania’s election security against hackers.

The ranking Democrat on the Senate committee that handles election-related bills, Sen. Anthony Williams, said he supports it in the hopes it would increase voter participation.

A spokesman for House Majority Leader Bryan Cutler (R-Lancaster) would not say whether he supported the measure, but he said the legislator supports getting the money to the counties and updating Pennsylvania’s election laws “to be as fair and secure as possible.”

Wolf’s office would only say they were reviewing the wording, and many rank-and-file lawmakers, including Democrats, had not read the measure.

Talks on the package started after Wolf vetoed a bill in July that carried the $90 million and the elimination of the straight party-ticket voting option. Top Republicans hadn’t negotiated the bill with him before sending it to his desk, and it lacked his election-reform priorities, he had said.

Wolf then vowed to borrow the money for voting machines the counties, using his existing authority, but was met with a threat of litigation by House Republicans and has not gone through with that plan.

The new bill doesn’t deliver all of Wolf’s election-reform priorities: He had also wanted same-day registration and early voting.

The negotiated measure still requires approval from both chambers and was scheduled for a House committee vote on Tuesday.

Under its provisions, voters would no longer have the single-choice option on a ballot to simply select a political party’s candidate for each office. Republicans began pressing earlier this year to eliminate the straight-party voting option, amid worries that suburban Republican lawmakers will suffer from a voter backlash against President Donald Trump next year.

Wolf and other Democrats had protested the move, saying it could lead to longer waiting lines at the polls, and that it was designed to benefit down-ballot Republican candidates. Republicans countered that most states don’t allow it, although voters in one state, Michigan, restored it by ballot referendum last year after the state’s Republican-controlled government eliminated it.

For people who want to register to vote, the deadline would move from 30 days before an election to 15 days.

Another provision would let any voter mail in a ballot for any reason. Currently, mailing in ballots is restricted to “absentee” voters who meet a narrow set of reasons laid out in the Constitution, including people who can’t vote in person because of job-related travel, religious observance, illness or physical disability.

With a lawsuit pending over Pennsylvania’s deadlines for counties to receive absentee ballots, the bill adjusts those deadlines to 8 p.m. on the day of the election. Currently, the deadline is the Friday before the election.

Most of Pennsylvania’s 67 counties have moved to replace their voting systems to the kind that Wolf wanted: systems that include voter-verifiable paper backups that are widely embraced by election integrity advocates and computer scientists.

The so-called direct-recording electronic machines in wide use in Pennsylvania’s 2016 election leave no paper trail and make it almost impossible to know if they’ve accurately recorded individual votes or if anyone tampered with the count.