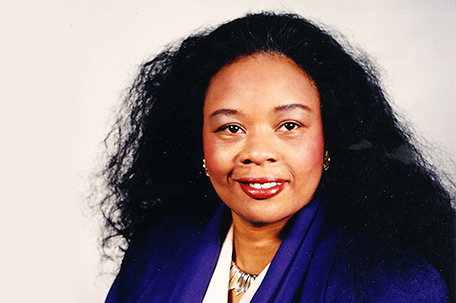 This week the Democratic National Committee will welcome over 50,000 attendees to Philadelphia for its four-day convention. As the party seeks to confirm a presidential candidate, there is much to be done among its delegates and constituents to ensure the achievement of its goal.

To support the DNC, there are scores of political strategists working to guarantee that the job gets done. Among them is Virgie M. Rollins. Most know her in political circles as the person who affects the distribution of political or economic power by exerting her influence as Chair of the DNC Black Caucus. Much has been written about her accomplishments and her superiority over her competitors in the political arena.

While politicos and political insiders pay ample tribute to Rollins’ intelligence, political shrewdness, eloquence and hands-on–,if somewhat aggressive– management style, and indeed give full credit to Rollins for her achievements, it is clear that she is an effective political power broker. Her experience working with presidents, senators, governors, mayors and other politicians have taught her how to acquire and wield power in order to achieve her political objectives.

In support of Democratic party initiatives, Rollins has distinguished herself as a go-to person who always gets the job done. And that is what she intends to do during the convention. She is focused on securing voter support for Hillary Clinton’s candidacy. Much of her time will focus on voting issues, especially mobilizing the grassroots voting efforts of the party. “It is the little people who win elections,” she said, noting that Black voters historically form a major base of support for the Democratic Party, particularly for national elections.

For the past 12 years, Rollins has served as the chair of the Democratic National Committee Black Caucus. The story of how she reached such a pinnacle of political power is extraordinary in itself,  culminating with Rollins as one of the most influential and widely respected political strategists in the state of Michigan and in the nation. She is also a highly-sought consultant, who heads The Rollins Group, an intergovernmental consulting firm.

It is how Rollins’ story begins, with its twists and turns, that make it a fascinating political odyssey. She is a self-professed PK (preachers kid) who moved to Detroit from Benton Harbor, MI.

“I’m a COGIC [Church of God In Christ] bishop’s daughter. I moved to Detroit and married a COGIC bishop’s son,” said Rollins, who is the seventh of 16 children. She and her husband Michael will celebrate their 50th wedding anniversary this year and have two grown sons, Michael and Martin.

“My father was probably the only African American pastor in Benton Harbor at the time. As it happened, I had never seen that many black people in my life until moving to Detroit. So I joined the Black Panther Party in Detroit.”

Rollins continued, “Angela Davis, Huey Newton, and H. Rap Brown all came. And so where do they want to meet? At the bishop’s house. And they were talking about reorganizing. And they were organizing programs to help the community that made a difference.”

Rollins’ assent to political power broker did not happen overnight. It was a collection of experiences that directed her path. When Rollins arrived in Detroit, she worked as a biological researcher for Whirlpool. However, after volunteering for community political initiatives, Rollins became enamored with politics. She was mentored by Detroit political strategist Robert Millender and then volunteered to work for U.S Rep. John Conyers’ early campaign for Congress.

Beginning at the bottom, Rollins admitted that she was willing to assume any task if it meant learning more about the political process. “I spent a lot of time listening and learning. I took notes during the meetings when local politicos, community leaders and black union activists were working hard to get [former Detroit Mayor] Coleman Young into office.” When Young was elected, Rollins was hired as his political strategist and she, earned her ticket for entrance into the real political game.

Rollins will tell you that volunteering lead to her start in politics. “Well, I got started by volunteering, and then helping Coleman Young. Then he got elected and I went to work for him. That was 15 years, and then I got burned out, because the job was 24 hours /7 days a week. I never slept.”

Still, Rollins admits, “Coleman Young was the best adventure of my life learning politics.” Two weeks after she left Mayor Young to ‘take a break’, Rollins received a call from then Michigan Governor Jim Blanchard with the offer of a position in his administration.

Recounting one of her most poignant lessons, Rollins noted that it wasn’t always easy to work with powerful people. She counted her then boss, Mayor Young, among that group. “It’s important to know who you are and stand your ground. Those who know Rollins would not use her name and the word “pushover” in the same sentence.

“I have always been able to speak the language of my political contemporaries,” explained Rollins, who admitted that sometimes the tone and delivery of the message must be harsh and aggressive, which is nicer way of saying she never concedes her position without putting certain people in their place. When working in politics, she believes it is a useful skill to possess.

One of Rollins’ major political lessons involved her boss, Mayor Young, who endorsed former Wayne County Executive Ed McNamara against candidate Bill Lucas. Rollins helped McNamara win the campaign. When McNamara decided to run the second time, Rollins’ supporting the candidate again, detractors criticized her and believed only a win could save her credibility.

“Coleman was mad because he had put McNamara on the Water Board, and he would sit on the Water Board and raise those rates. Then he’d go downriver and act like he didn’t have anything to do with it–it was all Coleman. And those folks turned against Coleman,” Rollins recalled.

“So Coleman was running Sam Turner, and I said ‘Mr. Mayor, I have to help this white man because he’s going to win, and you’ve got to have somebody black over there.’ And he said, ‘I don’t care.’ And I said he was a smart man, but he didn’t have a chance against McNamara, who had already run before.

“People were mad because I’m helping this white man from Livonia. They were blaming me for everything,” said Rollins, who became McNamara’s political strategist and knew she needed 27 percent of the Detroit vote to get McNamara elected. “Lo and behold, we got 29 percent out of Detroit.”

There were times some of the Democratic Party establishment expressed disapproval of her support for opposing candidates. However, Rollins did not become unhinged by the criticism. She tenaciously held her ground when responding to the naysayers. She admitted that standing your ground and sticking to your principles are useful skills in the higher echelons of power, and we won.”

After eight years, Rollins left Gov. Blanchard’s administration, where she had served as Assistant Director for the Department of Licensing and Regulations. She went on to serve another eight years as Assistant County Executive under McNamara before working as a consultant for President Bill Clinton’s U.S. Department of Commerce Secretary Ron Brown. It was a job she described as “one of the best jobs I ever had” until Brown lost his life tragically in a plane crash in Croatia in 1996. Following that tragedy, she became a consultant for two other Clinton cabinet members—Secretary of Labor Alexis Herman and Secretary of Transportation Rodney Slater.

When President Bill Clinton was first elected, Rollins remembers that it was her first major exposure to national politics. She played an instrumental role in getting Clinton elected. “So let me tell you what happened. All the wannabes, and the big shot union guys, they endorsed Senator Tom Harkin. So I did this reception for Bill Clinton, and nobody wanted to come except for the little people and the precinct delegates. And then Bill Clinton won. OK? And then everybody wanted to be my friend.”

Rollins later went on to help a relatively unknown senator from Illinois by the name of Barack Obama launch his political campaign for the presidency. She noted, “Initially there was very little support. As the momentum picked up many got on board. But it was the mobilization of the grass roots that led to President Obama’s ultimate success.”

Rollins, who later became the chair of the National Federation of Democratic Women between 2001 and 2003, led two delegations to Taiwan, the first under President Clinton, the second under President Obama. Rollins, who also served as chair of the Michigan Democratic Women’s Caucus, had the honor of introducing First Lady Michelle Obama at the 2012 Democratic National Convention. Rollins also credits Philadelphia’s C. Delores Tucker, who was the first African American woman to chair the Federation, as a mentor.

Presently, Rollins, the political consultant, works at the White House twice a month, primarily conducting focus groups on various issues and concerns. She has security clearance to travel on Air Force One, which she has used numerous times. And she is working hard to make sure Hillary Clinton becomes the next President of the United States – although she admits her early preference was for Bernie Sanders.

When her political career and contributions are assessed by future generations, Rollins wants to be remembered as a person who was able to make a difference in the lives of others, especially young people.

“I know when I can make a difference with people. That’s what I’m all about— making a difference,” asserted Rollins, who’s political legacy and future historic assessment was cemented when her papers where placed in the Library of Congress. She noted the ceremony, which was held earlier this year, was attended by Congressman Conyers.

“By being the national president of Democratic Women (emeritus) and the National President of the Democratic National Committee Black Caucus, I got chosen. And every year I can add more papers to the collection.”

It is Rollins’ hope that her legacy, preserved at the Library of Congress,— with its well-spring of information, will become a blueprint for aspiring young activists, who endeavor to battle for political, social and economic change to ensure the country maintains its promise of equality, justice and liberty for all.

Tea Baggers in the Black Caucus—what’s the point?