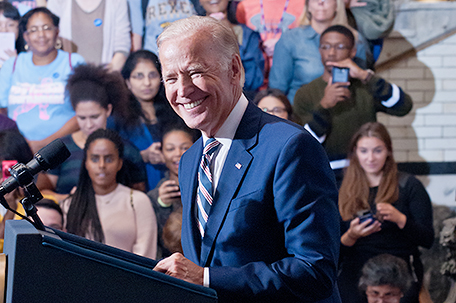 ABOVE PHOTO:  Vice President Joe Biden speaks passionately to crowds of students and others on last Tuesday’s National Voter Registration Day to get out the vote and rally for Democratic Presidential nominee Hillary Clinton.  (Photo by Bill Z. Foster)

Deadline to register for the November 8th election is October 11th

Vice President Joe Biden returned to the state of his birth, Pennsylvania—one of several crucial swing states that could decide the outcome of this year’s presidential election—on Tuesday, September 27th. He addressed 575 students at Drexel University as part of a National Voter Registration Day, doubling down on the IWillVote.com tool. The tool is a one-stop online portal launched for Pennsylvanians who wish to register to vote or check their registration status, and is free of charge.

According to the National Voter Registration website, nationalvoterregistrationday.org, 6 million Americans did not vote because they missed a registration deadline or didn’t know how to register in 2008. The organization wanted to make sure that this was never again the case going forward. This year’s National Voter Registration Day events took place across multiple online platforms, at rallies and voter registration workshops throughout the country. Thousands of volunteers, including major sponsors, organizations, celebrities, and public figures participated in this year’s event.

The 2016 election is unique in a couple of instances. It is not only the first election with a woman nominee at the top of a major party ticket, but is also the first major race held without the full protection of the Voting Rights Act of 1965 in place.

The Rev. Jesse Jackson voiced his concern last weekend when he visited four area churches on behalf of Hillary for America, among them Sharon Baptist and Bibleway.

“I’m here to focus on voter registration. The stakes are incredibly high, and the costs are significant. The right to vote has been under attack. Once Section 4 of the Voting Rights Act was struck down by the Supreme Court, several Southern states created legislation to weaken voting rights. The Supreme Court recently struck most of that legislation down because they were race-based,” Jackson said.

Another factor is in play this year, a familiar one, exacerbated by 24/7 coverage of the spectacle rather than substance – voter apathy and general ennui.

“People have been discouraged from being excited about this election because there’s been more focus on attacks than on the issues they want to talk about,” Jackson said. “There would be more excitement if we were talking about issues like wages, gender equality, and criminal justice reform.” 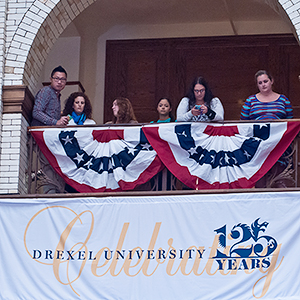 “Donald Trump is painfully uninformed; his policies are not very helpful to our country,” Biden said. “But what bothers me most about this [presidential] race is how palpable his cynicism is about the American people.”

Biden was especially irritated by the short shrift Trump gave to workers by declaring that his years of exploiting tax loopholes, possibly avoiding paying few or any taxes at all over the years as something that “makes me smart.”

“Tell that to the janitor in here who’s paying taxes. Tell him to tell my Dad, who when he was alive, busted his neck working 60 hours a week and paid all his taxes. Tell that to your mothers and fathers who are breaking their necks to send you here. It angers me! ” Biden remarked. “This a man who said– and wants to be president– that it was ‘good business’ for him to see the housing market fail. What in the hell is he talking about?” Biden exclaimed, as the crowd cheered.

“I have been there [Washington, DC] for eight presidents, Democrat and Republican. I’ve disagreed, and I’ve agreed. But every President I have served with–including the Republicans–has had a moral center about what it was to be an American, about what we’re supposed to do, about what basic fundamental rights are. Can you imagine Ronald Reagan –the most conservative president–saying it’s good business to take advantage of people’s misery? What does it say about this man, who wants to be president of the United States?”

The vice president encouraged the students– part of a generation he cited as the most engaged and tolerant in American history– to rally their politically disengaged peers.

“A lot of the students like you [who came of age] during the Vietnam War, at the end of the Civil Rights Movement, that hasn’t finished yet, at the beginning of women’s movement and the environmental movement, we got engaged. You’ve got to get your colleagues engaged.”

As an international figure and diplomat who has always been respected around the world even before becoming vice president, Biden has been fielding concerns from other leaders about a possible Trump victory.

“I got a call from two of my friends, the presidents of Latvia and Lithuania, desperately needing me to come to the Baltic States and meet with the three presidents, from Latvia, Estonia and Lithuania, to assure them that Donald Trump doesn’t represent America when he says that he would not honor Article Five in the NATO treaty, unless they met certain requirement beyond being a member of NATO. Think of the damage he is already doing to America’s standing in the world. “

Biden closed his remarks highlighting America’s 21st-century achievements and Hillary Clinton’s qualities and qualifications to be president, in contrast to the dearth of them in Donald Trump.

“Hillary has demonstrated that she is a leader, she cares about the circumstances of the American people, not just the super wealthy and thinks everyone should pay their fair share. We simply cannot elect a man who belittles our closest allies, embraces dictators like Putin, a man who seeks to sow division for his own gain, a man who uses bluster and confuses it with strength,” he said.