A Valuable Resource for the Region 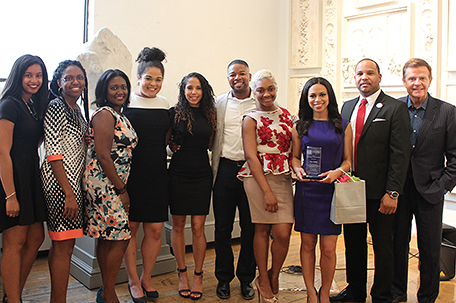 A Valuable Resource for the Region

“No matter what accomplishments you make, somebody helped you.” –Althea Gibson

The African-American Chamber of Commerce of Pennsylvania, New Jersey and Delaware (AACC) was formed in 1993 in response to obstacles that have included discrimination in city contracting,

The Chamber currently has 350 members, and that number continues to increase as more residents are choosing nontraditional employment options and entrepreneurship as their livelihood.

“Since its inception, the African American Chamber of Commerce has worked to become an influential voice for the region’s minority business community by providing resources, opportunities, and awareness,” said Karen A. Lewis, Assistant Vice President, External Affairs in the Office of Government and Community Relations at Drexel University, and one of the Chamber’s board members. “Today with strong leadership and engagement, the African American Chamber of Commerce is on the path to thrive and not just survive. The Chamber has helped reframe the narrative about inclusion and participation and its positive impact at all levels of business.”

In addition to its annual and quarterly membership meetings, AACC hosts programs and activities year-round, such as ACCESS Breakfasts, which allow members to network with each other, as well as hear presentations from informative speakers about local contracts and businesses opportunities, and a Speaker Series featuring successful regional business leaders.

AACC recently sponsored a series of events entitled Level Up Week, largely aimed at the region’s millennial population, in the 25- 35-year-old demographic. The group – which was diverse in ethnicity and gender – met daily to exchange ideas and methods, network and receive guidance from successful peers about the options available to them as they explore different work options that speak to their talents and goals. 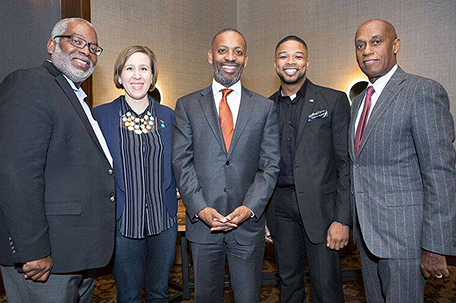 Programs like this help create the next generation of Black entrepreneurs, said Steven S. Bradley, AACC Board Chairman and president of Bradley and Bradley Associates, a Center City insurance firm.

Because Philadelphia has the highest poverty rate for a city its size, and much of that poverty is concentrated in the Black community, such efforts are needed, Bradley said.

“African-American businesses are strong because African-American companies tend to hire from their community, they tend to give people from that community second or third chances, and they also bring in young people to mentor,” he said.

Much of the credit for increasing the Chamber’s visibility among this group in the region goes to AACC President, Michael A. Banks, who was appointed in 2015. As a business leader under 40, his youth, vision and willingness to work with both new and seasoned entrepreneurs has proven to be invaluable to the Chamber at this stage of the group’s nearly 25-year history, Bradley said.

That growth is going to be crucial for the AACC to continue to have influence in the region in the current business climate.

“Anyone who questions the need for the African American Chamber of Commerce need only look at private development taken place in Philadelphia,” said Kenneth Scott, chairman and CEO of the North Philadelphia-based Beech Corporation, and member of the AACC board of directors. “[There are] several billion dollars in new private development and African- Americans — who make up almost half of the city’s population—account for less than 5 percent of contracts and workforce.”

Bradley acknowledges that in order to break through these barriers, that there often needs to be an intermediary for African American businesses that advocates on their behalf. This is where the leadership of the AACC plays a vital role. Part of that responsibility includes taking an active stance with policymakers.

“We have to continue to be a part of the government process, whether through lobbying or through sitting on different commissions and boards, so that we are in the role of decision makers as board members. That’s crucial, because that is how you build trust and integrity,” he said. 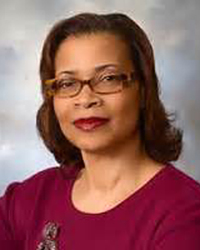 Toward this end, the organization has also been focusing on resource sharing and coalition building. Two of their programs — The AACC Supplier Development Program and Member-2-Member Benefits Program — actively support business growth through education, advice and constructive criticism, and encourages members to be proactive by doing business with each other.

“Whenever I see my members, I always challenge them, saying that it’s not a sprint – it’s a long-term commitment,” Bradley said. “You’ve got to be invested. The way you become engaged is being visible; the more you are visible, the more you can meet people like [City Commerce Director] Harold Epps. the more you can meet suppliers at the University of Pennsylvania or Drexel. You have to be engaged.”

The 21st century business world — like the world itself — is adapting to a more globally inclusive model of interaction, due to the massive technological expansion, which has taken place over the last 25 years.

Greater access through travel, the internet, social media, and other forms of innovative communication have altered the world forever. Borders, distance, time zones, and even language barriers have become almost seamless. Simply doubling down, restricting business outreach to one sector of the population, and relying upon “how it’s always been done” can put a business at an extreme disadvantage in today’s competitive marketplace.

Bradley recognizes how important collaborations with diverse organizations are to AACC members. While it’s important for the Chamber to maintain its focus on what’s most beneficial to the African American community from a business perspective, teamwork makes the dream work.

“We do work with the Asian Chamber, the Gay and Lesbian Chamber, the Greater Philadelphia Chamber,” he said. “We have to work with other organizations… We believe that [if there is] anybody who wants to invest in our community, we want to collaborate with them, because it makes the city stronger, it makes the economy stronger, and it teaches young people that the demographics are changing.”

“I just came back from a trade mission with the city in Asia,” Bradley continued. “When we do these types of trade missions, we come back and share the information with our membership…being part of that network, they can say ‘we have this group of people coming from Germany; invite some of your members to our event.’”

According to their official website, AACC memberships last for one year. Individuals that do not currently have their own business are welcome to join. It uses the North American Industry Classification System, which classifies business establishments in order to collect, analyze and publish statistical data related to the American economy. The AACC also recommends that all members become certified minority enterprises.

In 2004, it solidified its commitment to the region’s African American community, the economic growth and sustainability of its businesses, and educational outreach when it founded the nonprofit African-American Foundation.