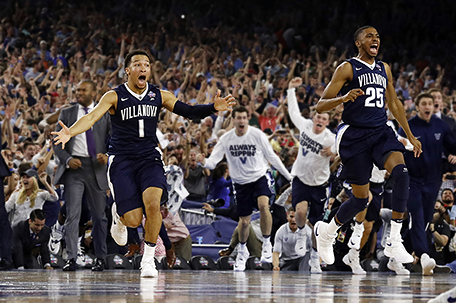 One good shot deserves another, and Villanova comes out on top

For the Philadelphia Sunday Sun and The Chris Murray Report.

If you’re expecting something on whether Villanova should have celebrated their title in Center City or in Radnor, this ain’t that column for you. As far as I’m concerned, if they’re covered by all the major media outlets in this town including us, they’re a Philly team.

What I will tell you is that a few days removed from what was the one of the most fantastic finishes that I’ve ever seen since watching college basketball back in 1973, I have to say that might have been the best national championship ever.

On a pass from point guard Ryan Arcidiancono, Kris Jenkins’s three-point bucket with time running out was the ultimate answer to the game-tying three by North Carolina point guard Marcus Paige with four seconds left. There were no losers in this, just the team that won and the other that almost did.

I know my fellow old heads will probably give me the side-eye for saying that considering games North Carolina-Georgetown 1982, or even North Carolina State-Houston, which was the last time NCAA Tournament end on a buzzer-beater.  You may even throw in Indiana-Syracuse 1987 with Keith Smart’s clutch shot or Duke versus Butler 2010 when the Bulldogs almost won it on a shot from half court.

Villanova-North Carolina 2016 had just about everything. It was a game that ebbed and flowed with each bouncing back just when it looked like the other team was about to apply the knockout blow.

Unlike Georgetown-North Carolina in 1982, there was no accidental pass to the other team to settle the game. I’m sure diehard Hoyas often wonder what would have happened if Fred Brown would have found a wide-open Eric “Sleepy” Floyd for the potential game-winning basket.

It never came and we are still left with the memory of that iconic jump shot by Michael Jordan that turned out to be the game-winning points.

I will take Monday night’s Villanova-Carolina game over the buzzer beater between NC State and Houston in 1983. That was the game where NC State guard Derek Whittenburg threw up a desperation airball that was caught by teammate Lorenzo Charles who dunked it for the winning score with time running out.

If Houston had hit their free throws in the game closing minutes, would we have had the big dunk. If the Cougars hit their free-throws down the stretch of that game, we probably would have been talking about how NC State played well in a losing effort.   Those misses opened the door for N.C. State to pull off an improbable finish.

Both Nova fans and Georgetown fans remember the perfect upset when the Wildcats shot 90 percent from the field in the second half and 78 percent for the game. It is still considered the greatest upset ever in college basketball.

What really made this game special was that you had to two evenly-matched teams that were ranked in the Top-5 during the regular season. Both Carolina and Villanova had guards who could score from just about everywhere.

In this game, the Wildcats and Tar Heels took each other’s best shots only to get off the deck and come roaring back. In many respects, it reminded me of a classic baseball game.  In Game 5 of the 1976 American League Championship Series, the Kansas City Royals had tied their game in the top of the ninth. But in the bottom of the ninth, first baseman Chris Chambliss hit a walk-off home run to send the Yankees to the World Series.

Oddly enough, the guy who hit the winning bucket Monday was also named Kris, but with a different spelling.

This was a game for the ages.  Both teams played well enough to win and gave their maximum effort. While the sting of losing hurts now for Carolina coach Roy Williams’s squad, they did everything within their power to win.

As for head coach Jay Wright and his Wildcats, they can just enjoy the parade.