Unsafe at Any Location 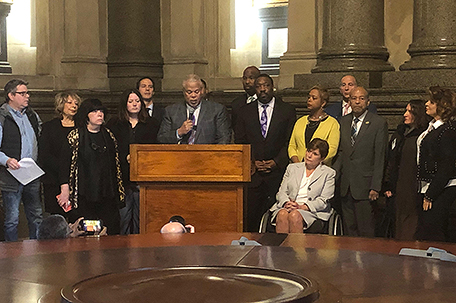 ABOVE PHOTO: Sens. Anthony Williams (center) and Christina Tartaglione, (in wheelchair) held a news conference in City Council’s Caucus Room Tuesday to announce a package of bills that would regulate safe injection sites for opioid users. The bills took on new urgency when Safehouse, a non-profit organization connected to former Gov. Ed Rendell, attempted to open one of these sites in South Philadelphia without community input.

Thanks to a non-profit’s attempt to go completely around Philadelphia City Council and residents of South Philadelphia, the chances of safe injection sites for opioid users have gone from slim to none.

Usually, getting Philadelphia City Council and the Pennsylvania Legislature to agree on anything doesn’t happen a whole lot.

But on Monday, a gathering of City Council members and state legislators illustrated that they could agree on one thing, and that thing is that no one wants to give intravenous drug users a safe place to inject their drugs anywhere in the city.

At a news conference held in City Council’s caucus room in City Hall, State Sens. Anthony Williams, and Christine Tartaglione, and State Rep. Maria Donatucci joined City Council members including Mark Squilla, and Kenyatta Johnson to talk about a group of bills designed to either add some layers to the process of creating a safe injection site, or abolishing them in Pennsylvania altogether.

Williams’s bill, which has actually been languishing in the Senate Judiciary Committee since its introduction in October, was brought back to life after Safehouse, a non-profit agency connected to former Gov. Ed Rendell, attempted to open a site in the Constitution Medical Plaza in South Philadelphia with the blessing of Mayor Jim Kenney after a ruling in the organization’s favor in federal District Court.

Mayor Kenney remains committed to this form of harm reduction, despite the setback.

“I remain convinced that overdose prevention sites do save lives — as they have in more than 100 cities around the world,” Kenney said in a statement. “I remain committed to moving forward in a deliberate, thoughtful, and collaborative way to open a site that will save lives.”

The site, which also houses two day care centers and various other health facilities, cancelled Safehouse’s lease on Friday, but the bad taste this left in the mouths of many requires a response, Williams said.

“Government shouldn’t happen to the people, it should happen with the people,” he said. “The process that was done here was not democratic. It’s a fundamental right of the citizens to express their opinions. This requires that the community have a say in this process.”

If passed, the bill would the Commonwealth’s Controlled Substances Act to criminalize opening any establishment that gives space or provides paraphernalia that a person can use to take drugs. Penalties would include a $2 million fine for any organization that opens a safe injection site and a 20-year prison term for an individual.  The exception to this would be if a municipality passes an ordinance allowing safe injection sites. If that happens, under the proposed bill, the organization must require trained medical professionals on site, hold three public hearings and create a community safety plan with the police.

When asked about the harshness of these penalties, Williams recognized that they’d probably be negotiated down, but he cited historical precedent for that part of his legislation.

“Was crack 20 years [ago], and are people still in jail because of it?” Williams asked. “Those people weren’t concerned about harm reduction and talking to those neighbors. They need to combine with communities that have been overrun by this epidemic. They also need to engage with some of us who understand a little better about what happened because we still live there. So with all due respect, I do think they’re harsh. But they have yet to reclaim those lives that are still locked up.”

State Rep. Maria Donatucci said she has a companion bill in the house. But neither of [them] has gone as far as Sen. Tartaglione. If she has her way, safe injection sites would be against the law in Pennsylvania. Because her senatorial district includes Kensington, the epicenter of Philadelphia’s opioid crisis, she’s heard the children she represents tell stories no child should be able to tell. Stories that a safe injection site would only make worse

“The kids in my district have [post traumatic stress disorder],” Tartaglione said. “They walk past needles and have to walk over bodies on the sidewalk to get to school. If [Kenney and Rendell] believe so strongly in safe injection sites, they should put one near their homes.”

The idea of these laws is to try and lead people into getting treatment. But when asked about how that treatment would be paid for when the person addicted is indigent, Williams and Tartaglione said that would be something that would be part of the discussions for the upcoming budget.

But while the Commonwealth has thrown down the gauntlet regarding safe injection sites, it did so after Philadelphia City Council weighed in on Safehouse’s attempt to open the South Philadelphia facility. During Thursday’s council session, Councilmember David Oh introduced legislation that would lump safe injection sites into the category of “nuisance medical facilities”, meaning that there must be six months of community notification and discussion and the only way one could be operated is if 90% of the people living within a mile of the facility approve of it.

In a speech on the floor of council chambers, Councilmember Maria Quinones-Sanchez decried Safehouse’s attempt to circumvent the process, a process that was making progress in her district, which, like Tartaglione’s, includes Kensington.

But unlike Tartaglione and Williams, Quinones Sanchez doesn’t see being punitive as the answer.

“I lived in Hunting Park during the crack epidemic,” Quinones-Sanchez said. “I’d rather we do something different when it comes to Kensington.”

There is no timetable for the bills to be introduced in Harrisburg. Councilmember Oh’s bill, however, was expected to be discussed during Thursday’s Council meeting.