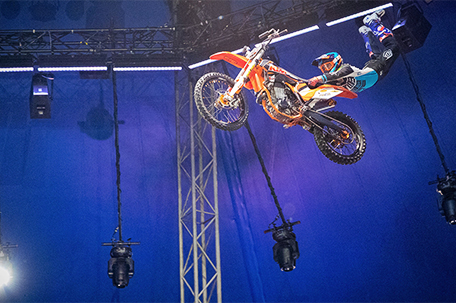 John Aston and his two sons rose to their feet cheering and clapping as the UniverSoul Circus opened another unforgettable show in Philadelphia. The circus is a big-top spectacle that takes fans of all ages on an unforgettable journey of light, sound and soul.

They were thrilled by the Moko Jumbie, stilt walkers inspired by the “ghost healer” of the same name in African folklore. Arterial acrobats from Mongolia soared and flipped using a teeter board and Trinidad & Tobago’s Limbo Queen left them speechless. The boys also gasped in amazement as motorbike daredevils flew through the air at high speeds.

The UniverSoul Circus —hailed as the most interactive circus in the world and often referred to as “A big party under the big top” — has raised its tent in Philadelphia’s Fairmount Park. For many like the Astons, the circus offers family-friendly entertainment, featuring amazing acts from around the world.

Each show is filled with hours of thrills, spills and chills and good, clean, wholesome fun for everyone from ages 2 to 92.

Joan Andrews, who invited seven children from her Oak Lane neighborhood to the circus, attributes its success to the highly interactive combination of circus arts, theater, and music, including pop, classic R&B, Latin, hip hop, jazz and gospel.

“It’s a different circus for many reasons: it’s interactive, the audience is part of the act and people are encouraged to dance and sing on stage or between the aisles,” said Andrews, who also enjoys the performances which send a message of global inclusivity and unity.

UniverSoul Circus has been traveling the country and has been entertaining audiences across the country for over 29 years, but its home is in Atlanta. It was founded in 1993 by Baltimore native and concert promoter Cedric Walker, who wanted to showcase Black talent. According to Walker, the show debuted with a 10-day run in the parking lot of the old Atlanta-Fulton County Stadium in 1994.

The circus began its run on the road in 1999 and has stayed there. It grew to become a platform for presenting talent from around the globe, from Caribbean dancers to a comedic dog act from Chile to the multitalented co-ringmasters, Comedian N_O and Cheyenne Ross Daily, the circus’ first female ringmaster, who began her career as a dancer after auditioning in her home country of Trinidad and Tobago for the UniverSoul Caribbean dance troupe.

Comedian N_O is an Atlanta native who began his entertainment career in the comedy world. He can dance, sing, turn a joke, and keep the audience pumped up, UniverSoul Circus style.

Along with their sidekick, Zander “Zeke” Charles, the short-statured UniverSoul mainstay, the ringleaders entertain circus-goers while expertly weaving the performances together with humorous interactive games, songs and dancing between sets and a brief intermission.

Zeke has been a fan favorite since UniverSoul’s inception, especially his traditional audience running of the “Soul Train Line.” The audience participates in the animated dance-off that brings them to their feet cheering, singing and hysterically laughing.  The gaiety is topped off by their energetic dancing in the isles.

But it is much bigger than a local show, with ever-present high energy music, colorful costumes and rhythmic dance moves contributing to the show’s global feel. Audience members are informed that performers hail from Chile, Mongolia, China, West Africa, United States, the Caribbean and all over the world.

It is the interactive engagement with the crowd that separates this circus from most others, said Lynn Crawford, a circus regular of nine years.

“One of my favorite acts in the show is Fresh The Clowns. I love the neon colored-hair and costumes of the three-member troupe and their interaction with the crowd, especially the children,” said Crawford, who has made attending the circus a family tradition.

Robert “Onionhead the Clown” Dunn, remains a memorable fixture at the UniverSoul Circus.

As the circus’ signature clown, Dunn captures the essence of UniverSoul Circus with his characters, “Clown Player” and “Clown from the Hood.”  He got his start as a birthday party clown in 1983 when his daughter was unhappy with the clown he hired for her party.  The laughter of the children went right to his soul.  In 1996, he joined UniverSoul Circus working as a cook, with the tent crew, and anywhere there was a job to do.  It was not long before he was making cameo appearances as Onionhead.

For West Philadelphia native Nathan Johns and his four children, the real thrills also come with the performance by the Pompeyo Dogs and their animated tricks.

“The boys found the act very engaging and their performance makes us feel that we are really a part of the act, and when we come to the circus, we feel like we are part of a big family,” noted Johns, who has been attending the circus with his family for the past five years.

Animals continue to be part of the show, but they have been de-emphasized.  During the show, four dancing camels and three zebras appeared as part of a synchronized dancing performance. There are no exotic animals such as elephants, tigers and lions.

The inclusion of exotic animals has been a controversial one, as circuses face tighter regulations and protest from would-be customers and animal rights groups. Some major circuses have closed due to major declines in ticket sales after retiring the exotic animals.  However, UniverSoul Circus has adapted to those changes and remains one of the last surviving circuses. It is ranked as one of the top active national touring circuses according to the Circus Historical Society, a non-profit organization that promotes the history and the culture of the circuses since 1939.

After the show is over, the audience cheers, the entire cast of performers takes its bow and thunderous applause rains on them.  The bright lights and pulsating music become silent and the standing ovation, accompanied by deafening clapping, grows faint. After the audience spend time meeting and seeking autographs from the performers, the circus ring finally fades to black.

As crowds exit the big top, circus-goers could be heard recounting their most memorable moments. Others were already contemplating next year’s event.

“The show gets better and better every year,” exclaimed John Addison, who traveled from North Philadelphia with his two young sons. They had already prompted him to purchase tickets for next year’s circus.

The UniverSoul Circus performer will impress the crowds with their antics and showmanship under the huge Big Top Tent at Fairmont Park (located next to The Mann Center), until Sunday, November 21.

Tickets may be purchased at the box office located in front of the Big Top Tent at 52nd Street and Parkside Avenue, next to the Mann Music Center. For ticket information and box office hours, visit: www.universoulcircus.com.

The UniverSoul circus is committed to the safety, security and comfort of their guests. They pride ourselves on hosting a safe, family friendly show with strict, COVID-19 safety measures:

• All guests and staff are required to wear masks

• Performers and onsite staff are routinely tested for symptoms

UniverSoul Circus opens with plenty of thrills, spills and chills under the big top tent