UniverSoul Circus opens with plenty of thrills, spills and chills under the big top tent 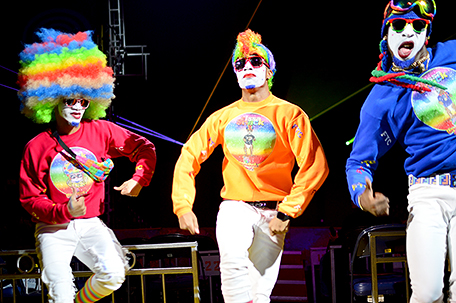 Willa Turner and her two children rose to their feet cheering and clapping as the UniverSoul Circus opened another spectacular show in Philadelphia.

Turner, now 32, was 11-years-old when she attended her first UniverSoul Circus performance. “I have come every year since my mom first brought me eons ago,” Turner said. “I now have the same opportunity to introduce my girls to the same great experience.”

At recent Sunday show, Turner’s children, Jasmine and Tiffany, were in awe of the towering Moko Jumbie, a stilt walker inspired by the “ghost healer” of the same name in African folklore. Aerial acrobats from Mongolian soaring and flipping using a teeter board and Trinidad & Tobago’s Limbo Queen left them speechless. The girls gasped in amazement at motorbike daredevils flying through the air at high speeds. They also enjoyed theatrical performances, with dazzling costumes, and music from hip-hop to Caribbean rhythms to African beats to Beyoncé.

The UniverSoul Circus, for many like the Turners, offers family-friendly shows featuring amazing acts from around the world. Each show is filled with hours of thrills, spills and chills and good, clean, wholesome fun for everyone from ages 2 to 92 years old.

For circus-goer Larry Hastings, UniverSoul brings international talents together for a one-of-a-kind performance that strives to send a message of global inclusivity and unity.

“This show is not only known for its circus visuals and electric mix of music,” Hasting said. “It also has mastered the art of audience engagement and a melting pot of musical and cultural influences.”

Hastings, who attended the circus with his wife Loretta Lucy and his four grandchildren, has been a fan of the Circus over 15 years.

His connection to UniverSoul is an interesting one. As the story goes, his relationship with the circus began as what he described as a fun date with his now wife.

“We were living in Atlanta at the time  and were looking for dating venues that would be great fun and the circus seemed like the right place,” said the East Falls resident, who also spoke about attending the Big Apple Circus and the Ringling Bros. Circus, which has since closed.

UniverSoul Circus has been traveling the country and has been entertaining families across the country for over 26 years, but its home is Atlanta. It was founded in 1993 by Baltimore native and concert promoter Cedric Walker, who wanted to showcase Black talent. According to Walker, the show debuted with a 10-day run in the parking lot of the old Atlanta-Fulton County Stadium in 1994.

The circus went on the road in 1999 and has stayed there. It grew to become a platform for presenting talent from around the globe from Caribbean dancers to a comedic dog act from Chile to the multitalented ringmaster, Daniel “Lucky” Malatsi, a South African native who can dance, do acrobatics, and keep the audience pumped up  UniverSoul.

Malatsi might not be considered your ordinary ringmaster.  His bedazzling top hat and tux with tails, trimmed with sequins and beads, speak volumes about the unusual ringmaster.  His fancy footwork and infectious enthusiasm draws the audience in for a performance with an international flair, infused with an African-American spirit.

Along with his sidekick Zanda “Zeke” Charles, the short-statured UniverSoul mainstay, Malatsi entertains circus-goers while expertly weaving the performances together with funny interactive games, songs and dancing between sets and at a brief intermission.

Zeek has been a fan favorite since UniverSoul’s inception, especially his traditional audience running of the “Soul Train Line.” The audience participates in the animated dance-off that brings them to their feet cheering, singing and hysterically laughing.  The gaiety is topped off by their animated dancing in the isles. But it’s much bigger than a local show, with the ever-present high-energy music, colorful costumes and rhythmic dance moves contributing to the show’s global feel.

Audience members are informed that performers came from Chile, Mongolia, Cuba, West Africa, United States, all over the world.  At the end of the show, ringleader “Malatsi, asked young ones in the audience to recite a pledge promising to love those who are different from them.

“This is a circus that prides itself on celebrating cultures from around the world and bringing them together and that is reflected in the ethnicities represented here who are coming out to enjoy a show,” Hastings, who observed an array of ethnic minorities enjoying the show, said. Animals continue to be part of UniverSoul’s show, but they have been de-emphasized from the live entertainment. During the show three dancing camels and four zebras appeared as part of a synchronized dancing performance.  There are no exotic animals — elephants, tigers and lions.

The inclusion of exotic animals is a controversial one, as circuses face tighter regulations and protests from would-be customers and animal rights groups, such as PETA. Ringling Bros. and Barnum & Bailey Circus saw a major decline in ticket sales after retiring the elephants and they eventually closed.  UniverSoul remains one of the last surviving circuses.

A number of circuses have been on the decline over the past 15 years, facing tighter regulations and protests over the use of exotic animals. UniverSoul is one of about 15 to 18 active national touring circuses remaining in the United States, according to the Circus Historical Society, a nonprofit organization which promotes the history and culture of circuses since 1939. The show is over, the audience cheers the entire cast of performers take their bows at the grand finale and thunderous applause rains on them.

The bright lights dim and the pulsating music becomes silent and the standing ovation, accompanied by clapping, grows faint. The show finally fades to black.  As crowds exited the big top, recounting their most memorable circus moments, some circus-goers were already contemplating next year’s event.  “The show gets better and better every year,” exclaimed James Robinson, who was being prompted by his two young sons — Jimmy, age 6, and Jeffery, age 5 — to purchase tickets for next year’s circus. Robinson, a North Philadelphia resident who did not want to disappoint his boys, explained, “Next year we will be the first in line for our tickets.”

The boys screeched with delight, as the family was engulfed by the thongs making their way to the exit.

The UniverSoul Circus will be performing under the huge BIG TOP TENT at Fairmont Park (located next to The Mann Center). From now until December 8, performers will be strutting their stuff and impressing the crowds with their antics and showmanship.

Tickets may be purchased at the box office located on Parkside Avenue in front of the Big Top tent in Fairmount Park at 52nd and Parkside Avenue next to the Mann Music Center. For ticket information and box office hours, contact: www.universoulcircus.com.