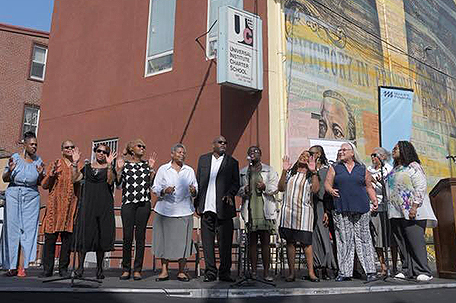 “Recently we learned the School District’s Charter Schools Office (“CSO”) intends to recommend to the School Board that Universal Audenried’s school charter be renewed only on the condition that the school agrees to a “surrender clause,” which forces the school to forgo its appeal rights.

Universal Audenried opposes any language suggesting we forfeit our rights to due process and, indeed, believe this conditional renewal violates the school’s statutory and constitutional rights.

Furthermore, Universal has done an excellent job of providing a high-quality education to our scholars, yet the issues of equity and our rights to educate our children are still a struggle. Therefore, we will vigorously fight against any injustice that seeks to violate the rights of an appeal or, more importantly, educate our children.

In 1982, my wife, Faatimah, and I rode through our South Philadelphia neighborhood of which I was raised and saw the devastation of the community, where I shared so many fond memories; I was appalled. As a result, we started Universal to provide opportunities to address the disenfranchisement plaguing the African American community, particularly the inequities of housing and education.

A community can only strive if there are quality housing, quality schools, a safe environment, and families who are engaged in its activities. Universal was designed to provide these services by creating an education system that has surpassed some of our peer groups.

In addition, Universal set out to change the conditions of the African American people who have been marginalized far too long. With a vision to change the trajectory, we built over 1500 affordable houses for our families and created a nurturing educational environment.

We demand that the School Board reject the CSO’s attempt to roll back our progress and force Universal Audenried to surrender its rights.

What is a community without Great Schools and Safe Schools?”

Further, the CSO has not, and cannot, set forth a clearly articulated, equally applicable basis upon which it even requires these “surrender provisions.”

Despite the lack of a definition or criteria, the CSO has nevertheless arbitrarily and unilaterally imposed surrender clauses as a condition of granting charter renewals. In other words, instead of recommending that a school’s charter is non-renewed, the Charter Schools Office recommends that the charter is renewed; however, a condition of renewal is that the charter school waives its rights to appeal and will voluntarily surrender its charter whenever the Charter School Office determines that one or more violations are egregious.

Effectively, this is tantamount to a charter school being unable to challenge or disagree with the CSO’s findings. As the School District of Philadelphia officials stated in 2018, the purpose of using the surrender clause is to avoid protracted appellate proceedings. (See www.inquirer.com/news/philadelphia-school-board-charter-school-richard-allen-20181214.html). When the Charter Schools Office imposes surrender clauses as a condition of renewal, it exceeds its legal authority and deprives the charter school of its rights granted by Pennsylvania law.

Nevertheless, today we received notification that Universal Audenried’s recommendation for renewal included a surrender clause. We unequivocally disagree with imposing a surrender clause as a condition of Audenried’s charter and any other charter school’s renewal. The School District of Philadelphia, as the authorizer for charter schools in the City of Philadelphia, has the right and responsibility to recommend renew or non-renew a school’s charter. It cannot demand surrender clauses as a condition of renewal.

If the School District determines that a school’s charter should not be renewed after a fair and equitable process, then the District has the authority to non-renew the charter. By state law, charter schools have the subsequent right to disagree with the District’s determination and proceed to appellate review.

When a surrender clause is a condition of renewal, the School District violates the law and subjects the charter school to its findings without the due process of appeal.

The Board of Directors of Universal Schools will not agree to a charter renewal agreement containing a surrender clause for Universal Audenried or any of the Universal Family of Schools. Further, we will seek legal counsel to ensure and confirm the latest actions of the CSO are not a direct violation and continued inequities shown to Universal, and other Black-led charter schools.

Moreover, we will continue to stand against the injustice and bias from the Charter Schools Office and the School Board. Universal has become their target despite outperforming district schools and turning around schools that were failures under the School District of Philadelphia.