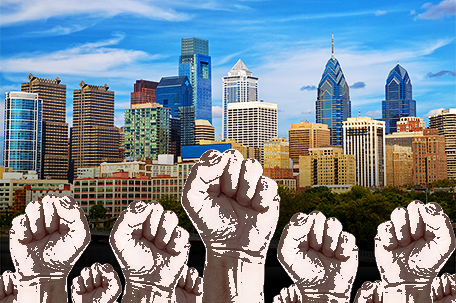 This year’s mayoral race comes at a pivotal time for the future of Philadelphia’s middle class. In our city and around the country, America’s once thriving middle class, the driving engine behind our economy, is rapidly shrinking.

Since 1980, almost all of the wealth generated in this country has gone to the wealthiest 10 percent. That means everyday Philadelphians are making less money than they were several decades ago.

We see the implications of gross economic inequality every day in the form of unacceptable poverty rates that disproportionately affect people of color. But this troubling spiral to the bottom not only affects those stuck in poverty with no opportunity for a way out, but increasingly threatens Philadelphians with full-time jobs who pay their taxes, work harder and are more productive, but still never seem to benefit from the fruits of their labor.

While many people believe that this financial reality is a forgone conclusion – a natural byproduct of an unforgiving economy – the fact is the increasingly bad hand dealt to working people is a direct result of policies that favor those who are already wealthy. And as the rich get richer, working people are forced to fight over a shrinking piece of the economic pie. It’s time that changed.

Unionized city workers, as well as Philadelphians in the health care and service sector, remain the foundation for the future prosperity of all workers in the city. The wages and benefits negotiated by unions as a result of collective bargaining sets an economic standard across industries and labor markets that benefits all of us. In states where collective bargaining is suppressed by anti-worker legislation, wages for all people are lower. The standards labor unions set should be the basis for an economy of aspiration and hope, not one of envy, greed and despair.

As the Democratic primary election enters its final weeks, we have an important opportunity to talk about key economic policies we want to see enacted by the next mayor to foster an economy that works for everyone, not just the wealthy.

Studies show that regardless of race, age, gender or geography, Philadelphians overwhelmingly say that increasing the incomes of ordinary Americans should be our first priority. We also support raising the minimum wage to $15 an hour by 2018. These local attitudes reflect national trends.

Philadelphians also favor implementing a paid family leave program that would reimburse workers some of their lost wages when they are away from work to recover from a serious illness or to care for a new baby or ill family member.

In addition to support for fully funded public education, the next mayor needs to address the rising cost of college education and job training, so working people can afford to train for the jobs of the future. He or she needs to support a policy that allows people to refinance their student loans to the same rate banks pay when they borrow money. Access to quality education should provide a path to a better financial future, not lock our children in an endless stream of debt.

All too often unions, especially public sector and service unions, are vilified by the political establishment rather than embraced as a force that can raise the standards for everyone. No one is guaranteed success, but if you work hard and play by the rules, you should be able to have to the opportunity to get ahead. No one who works full-time should live in poverty because their wages are so low.

As Philadelphians who provide public services in city government and in the private health care and service sectors, AFSCME members pay their taxes and are dedicated to improving the quality of life for everyone in the city.

As we enter the final stretch of the mayoral election, let’s keep the focus on what Philadelphians say we want – an economy that works for everyone, not just the wealthy. AFSCME members, your family, friends and neighbors, are important partners in this process. Together, we can help lift people out of poverty and rebuild Philadelphia’s middle class.