U.S. Rep. Bob Brady announces he will not run for another term 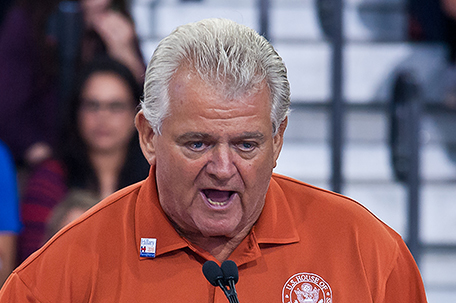 “Two weeks ago, I spent Saturday and Sunday sitting by myself in my congressional office only to watch the Eagles NFC Championship game alone as I waited for a vote on the floor of the House — a vote that never took place.  That weekend I looked back on all the other days and nights where the job came first; where I had to choose public service over family and friends.

Don’t get me wrong, I am the luckiest guy in the world.  I love my job, I love my district, and most of all, I love the people I have served.  I am not leaving because I love them any less today than I did the day I swore my oath of office twenty years ago.

But there are some things I love even more. I have been married to my wife Debbie for twenty-one years. Twenty of those years, I spent four days a week in the U.S. Congress.  I now have a great grandchild and another one on the way.  Today I choose them. It’s time to come home.”

Brady, 72, has been caught up in a corruption investigation over a payment his campaign made to a primary opponent in 2012. The FBI has said it believes Brady unlawfully concealed the $90,000 payment to get the opponent to quit the race, which he did. At one point, prosecutors also alleged in court documents that Brady had tried to influence a witness in the case.

Three people already have pleaded guilty to campaign finance-related charges in the case, including a former consultant for the congressman. But Brady was never charged, and on Wednesday, he declared, “I did nothing wrong.”

Brady said his lawyers had advised him that he would not face charges because the statute of limitations had run its course.

Asked whether his departure was part of a deal with federal prosecutors, Brady said, “Zero, absolutely, positively — you mean for me to resign? No. Zero. … I made no deals with nobody.”

Brady rose through the ranks of the city’s powerful carpenters’ union and Democratic Party before winning election in 1998 to Congress, becoming the senior Democrat on the House Administration Committee and a member of the House Armed Services Committee. But he was probably best known as Philadelphia’s most prominent cheerleader, frequently focusing his political clout and attention on matters at home.

He was facing a potentially stiff primary challenge from a former city official, Nina Ahmad, as his district faced near-certain changes now that a gerrymandering lawsuit has prompted the state Supreme Court to order a redrawing of the boundaries of Pennsylvania’s 18 congressional districts. The decision is on appeal by top state Republican lawmakers at the U.S. Supreme Court.

Brady’s district is heavily Democratic, and will likely remain in Democratic hands, although changing demographics — younger and more minority residents — posed a challenge for Brady.

In a statement, House Minority Leader Nancy Pelosi called Brady “a forceful champion for working people in Pennsylvania and across the nation” and the “Mayor of Capitol Hill.”

Brady’s retirement means there are six open seats in Pennsylvania, the most in decades. Four Republican congressmen have announced that they would not seek re-election — one, Lou Barletta, is running for U.S. Senate — while another Republican congressman, Tim Murphy, resigned in a scandal last fall.

The Associated Press contributed to this report.