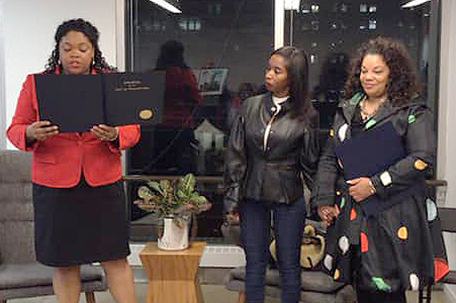 On the second Tuesday of each month PABJ members convene for their general body meeting in Philadelphia. In light of Women’s History Month, the group decided to change things up a bit and dedicated the second hour of their usual time to congregate to thank and acknowledge the city’s only African American female newspaper publishers.

Hicks and Horsey Darden were saluted by the organization and awarded with City citations following a one on one conversation about the hurdles and success that comes with owning and publishing a newspaper.

The program began with remarks from Deidre Childress Hopkins, who is a long time PABJ member and the director of public relations at Visit Philadelphia.

“It’s always a pleasure working with fellow members of PABJ and especially for a discussion with journalists and media influencers focused on the contributions of legendary women in Philadelphia,” said Childress Hopkins.

“Last month, I gave members an overview of how Philadelphia renamed itself the City of Sisterly Love for 2020. It was a partnership with Councilwoman Katherine Gilmore Richardson and supported by Visit Philadelphia as a tribute in the Year of the Woman,” she added.

“What an honor and privilege it was for me to present citations from Philadelphia City Council to the only two African American female publishers in the city of Philadelphia. Their work does not go unnoticed and is vital to the stories we read and see in the African American community in Philadelphia,”  Gilmore Richardson said.

“One word that expresses my feelings about this recognition is grateful,” Horsey Darden said as she accepted her citation. “I’m so thankful that PABJ is attentive and recognized the sacrifice, hard work and dedication that Cathy and I have for the community and our papers. Oftentimes, I face financial constraints to make it to press, and don’t think people really know what it takes.  So, their honor let me know that while you may not know all that goes into publishing a weekly newspaper, people recognize the product and the impact that we have on our community.”

“In addition to honoring us, PABJ also took a moment to listen, and that was just as valuable as the citations. They gave us a chance to forgo all false beliefs and/or opinions and share our truth. And that is something you cannot put a price on,” she added.

“My note to women is that life is one great challenge and we have to always work harder, be smarter and prove to ourselves and others that we have it.  Remember always that you have that “it” inside you and whatever your purpose is, when the time is right, all the stars will align and you will do and show the world who you are and what you are made of.  Never give up or give in,” she concluded.

The Philadelphia Sunday SUN is one of the most trusted news sources in the African American community. Founded by the late J. Whyatt Mondesire, former Philadelphia NAACP president and PABJ member as well as media leader, the SUN has overcome major transitions. After Mondesire’s passing, Hicks kept the newspaper going strong and is reaching new levels of success as the current publisher.

“As one of the few female publishers in Philadelphia, I  take the position very seriously,” Hicks said. “I am truly honored and thankful to receive this recognition during Women’s History Month, along with my colleague Sherri Darden Horsey, from both the PABJ board and Councilmember Katherine Gilmore Richardson. I share this honor with the SUN staff, who ensure the quality of our publication.”

“It was important for us to recognize women in the Philadelphia print industry who have made strides in our community for years,” Chantale Belefanti, PABJ board member at large, said.

“Cathy and Sherri, the only two African American women to run a printing company in our area make significant contributions to our community and they tell the stories that may otherwise go untold. PABJ will continue to honor and recognize women who make a difference.”

PABJ is the nation’s oldest professional association of journalists of color. With over 100 active members, the organization is also one of the largest chapters and is the founding chapter of the National Association of Black Journalists.

For more information about the organization and PABJ events and happenings, visit: phillyabj.com or connect on social media via: @PABJ.