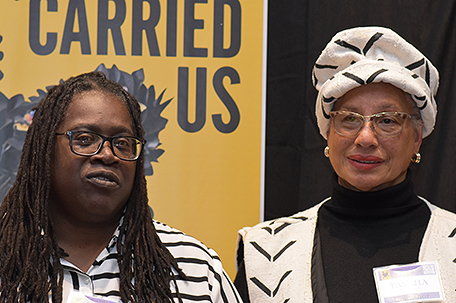 Co-authors Allener M. Baker Rogers and Fasaha M. Traylor held an invitation only launch and signing event last Saturday to say thank you to the women profiled in the book.

“The book signing part of the event came at the end of the program,” Baker Rogers said. “Before that, what our guests experienced was a series of dramatic readings from the book. We had selections from two young women, and we even had a young lady from The Baldwin School, a local high school, who closed the program for us. …we were also very pleased to have a dedication of a time capsule to the class of 2045 of the School District of Philadelphia. School District of Philadelphia representatives were on hand to acknowledge their acceptance of the time capsule, on behalf of those young people.

The time capsule will be housed at the Dr. Charles Blockson Museum on the campus of Temple University.

“The reality is that you get pretty tired of not hearing wonderful people talked about,” Traylor said. “As simple as that might sound, it’s almost discouraging in a way to know that there are so many Black women in our community who have, for years, done amazing things and nobody touts them or thanks them in public ways like we’ve decided to do. So it was time.”

“One of the ways we think about that is, what does it really mean, that in Philadelphia there are no monuments to Black women?” she continued. “Why is this the first full length book treatment about Black women in Philadelphia, for as active as Black women have been in this city, from its founding and before its founding? Those are questions we really need to be asking. What we’re trying to do is really focus on them and to bring everyone to focus on these women and their roles in this city.”

Allener Baker Rogers — who is known by the nickname “Sissy”– said that the book took nearly six years to complete.

“When you start writing a book like this, you don’t realize it’s going to take on a life like this, at the beginning,” she said. “I can’t tell you how many times we both thought that the book was going to be published. … there’s so much important work that goes into this kind of project, that if you are going to do it right, you have to step back and say, ‘we’re not finished yet.’”

Some of the Black women leaders featured in the book include Ona Judge Staines, Harriet Tubman, Mamie Nichols, Mattie L. Humphrey, Queen Mother Falaka Fattah, as well as Barbara Easley Cox, Dr. Dorothy Johnson Speight, and Sharmaine Matlock Turner, among many others.  For the most part for some readers, these will be recognizable names. However, the authors of “They Carried Us: The Social Impact of Philadelphia’s Black Women Leaders” equally included the stories of some powerful Black women leaders from Philadelphia who may not be as well-known, but who were equally amazing and made strong impact with the work they did including the likes of Marilyn Steven, Ann Appo, Jesse Redmon Faucet, Dr. Asali, Solomon, Jarena Lee, Zipha Elaw, Carolyn R. LeCount, and a host of others.

Traylor said that the women featured in the book are from many walks of life.

“We wanted to get as much representation across the nine fields that we focused on, as much as possible,” she said

“Allener M. Baker Rogers and Fasaha M. Traylor have given us a remarkable gift in their book, “They Carried Us, The Social Impact of Philadelphia’s Women Black Leaders,” Jovida Hill, author of “In The Land of Jim Crow,’’ and director of the Philadelphia Mayor’s Commission for Women said. “It couldn’t have come at a better time.  As we approach the 100th anniversary of women gaining the right to vote, and Black women being intentionally erased from the Women’s Suffrage Movement, this celebration of Black women in leadership, underscores how Black women everywhere have been uplifting us all.”

Baker Rogers is a native West Philadelphian who now resides in Virginia. She’s an honorary board member and former president of the Philadelphia Child Advocacy organization Public Citizens for Children and Youth, (PCCY). She’s served on Mayoral Advisory Committees and was a Governor’s appointee and chair of the Philadelphia County Assistance Office. A life-long educator and having earned a doctorate in higher education leadership from Widener University in 2003, she is also a former academic department director and assistant professor of educational research.

Traylor founded and directed an independent School, operated programs to link a local university with community needs, and taught in public schools’ alternative education programs. She was a copy editor at a major metropolitan newspaper, and has served on several boards, including Grant Makers for Children, Youth and Families. Traylor also  co-founded the “Ain’t I a Woman Network,” an activist group formed in the wake of Anita Hill’s treatment during Supreme Court Justice Clarence Thomas’ confirmation hearings, and is a principle of the organization, Lift Every Voice, LLC . she resides in Philadelphia.

The following book signing events on their calendar during Women’s History Month that are open to the public:

March 28, 2020, 1-4PM — Joseph E. Coleman Public Library at 68 W. Chelten Avenue at a meeting sponsored by the African American Freedom and Reconstruction League.  They will also give a talk at the West Oak Lane Library at 2000 E. Washington Lane at 6:30 p.m.

The books can also be purchased online at Amazon.com.  “We hope to have the books available at places such as Uncle Bobbies on Germantown Avenue and Hakim’s Bookstore on 52nd Street in West Philadelphia and other locations as well,” Traylor said. “We’re also open to be invited to come to events to do readings from the book and sign books for those who purchased them.”

For more information, the authors can be reached via email at: [email protected].