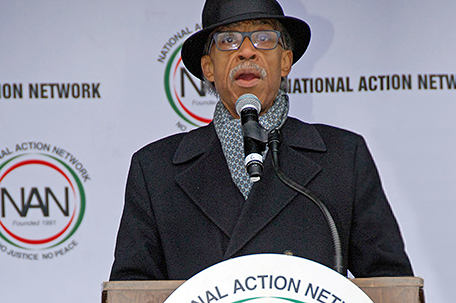 During Saturday’s We Shall Not Be Moved March, thousands braved the rain and a bracing cold to tell the incoming Trump Administration to prepare for battle.

You wouldn’t have blamed Bettye Hughes of Cleveland Heights, Ohio if she had just decided not to get on that bus from her hometown and come to Washington, D.C. for the National Action Network-sponsored We Shall Not Be Moved march.

A cold, driving rain dominated the day. Because of this, marchers had to deal with the possibility of ice, and the discomfort of the cold and rain.

But with the impending inauguration of Donald Trump as the nation’s 45th President, and a group of cabinet picks like Sen. Jeff Sessions (Attorney General) and Dr. Ben Carson (Housing and Urban Development) Hughes felt that she had to be here to send a message.

That message: going backward is not an option.

“This is an important moment in time,” Hughes said. “We are here because we’re facing the prospect of having our rights taken away. I had to be a part of this.”

Marchers came from as far away as California to let join the resistance to such Trump Administration plans of doing away with the Affordable Care Act and giving the nation’s police departments a freer hand.

Backed by a coalition of groups including Planned Parenthood, the NAACP, the National Council of LaRaza, the National Urban League, and the Human Rights Campaign, marchers walked from the National Sylvan Theater to the Martin Luther King Memorial on the National Mall.

The Rev. Al Sharpton, head of the National Action Network, said the marchers were there to not only let Trump know that his agenda wouldn’t go unchallenged, but to send a message to the only thing that appears to stand between Trump, the Republicans, and their more egregious impulses.

That message: Grow a backbone. You’re going to need one to be effective.

“We march in the driving rain because we want the nation to understand that what has been fought for and gained, that you’re going to need more than one election to turn it around,” Sharpton said.

A group of Philadelphia marchers came, including one on a bus trip sponsored by State Sen. Vincent Hughes, who spoke to the marchers before they made their walk from the National Sylvan Theater to the Martin Luther King Memorial on the National Mall.

During his talk, Hughes pointed out that the effort to maintain basic human rights for all during the Trump administration must be both local and national.

Among the Philly marchers was Robin Shine Maddox. Her father, the Rev. Robert Shine, former president of the Black Clergy of Philadelphia and Vicinity, was her inspiration for being at the march, she said.

“This is part of my legacy,” she said. “Civil rights are important to both of my parents, so I had to be here to fight for them.”

In addition to the March, Rev. Sharpton announced that he would be leading teams of voters to pay “house calls” on their senators to express their views on Trump’s cabinet picks. These “house calls” began this week.

‘We Shall Not Be Moved’ march aims to send Trump message on MLK weekend, Jan 14