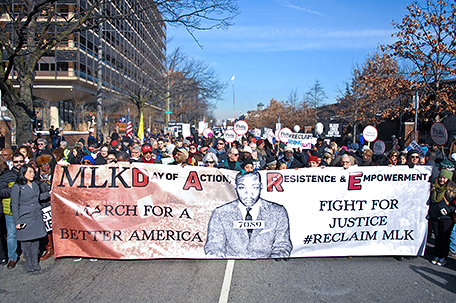 In anticipation of a new First Family, this year’s Martin Luther King Holiday took on a sense of urgency.

But while Monday’s observance of the national holiday had a service component, an urgency brought on by the 2016 Presidential Election brought King’s more activist side to the forefront as well.

The armory at Girard College was filled with volunteers, job seekers, people wanting to learn CPR and community groups participating in the 22nd annual Martin Luther King Day of Service. This year’s anchor project was the construction of book nooks that were taken to pre-schools, day care centers and other places where books and children can connect.

In a city filled with kids that may not have access to books, these bookshelves and the books contained within them could make a big difference, said Otis Hackney, Philadelphia’s Deputy Mayor for Education.

“This is vital,” he said. “We should be reading to children every day, especially in their formative years.”

About 145,000 volunteers took part in 1,800 volunteer projects throughout the Delaware Valley as part of the Day of Service, said Todd Bernstein, executive director of Global Citizen, the non-profit organization that hosts the King Day of Service.

Over the last 22 years, the Day of Service has given people a chance to celebrate King’s legacy of activism through service, Bernstein said. In addition to the various volunteer projects, a job fair filled with employers looking to hire right now was on hand, something connected to the economic justice direction his activism was taking before his assassination. 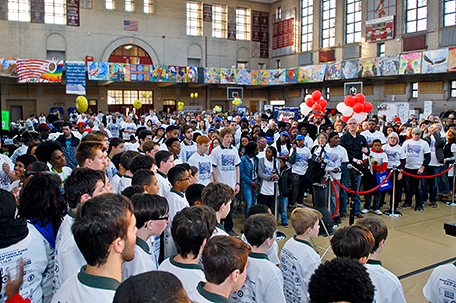 The King Day of Service and the volunteer projects it espouses have been the subject of a great deal of discussion about whether or not this is the best way to honor King’s legacy. While many believe that the volunteer projects that many were participating in at Girard College are necessary, many also believe that focusing squarely on King’s servant leader side gives an incomplete picture of the man.

“I don’t think that they’re mutually exclusive,” Bernstein said “There are many ways to serve the community. There has to be a variety of methods used from marching to projects like this to see the change we want to see.”

So it was no surprise to find out that like many of the other people participating in the various Day of Service volunteer projects, Bernstein was heading out to the Reclaim MLK D.A.R.E. Coalition (Day of Action, Resistance and Empowerment) march.

A group of activists including P.O.W.E.R., Juntos, various unions, community groups and activists gathered at the President’s House, a monument to the slaves kept by President George Washington at the nation’s first White House located at 6th and Market.

From there, everyone marched to Mother Bethel AME Church at 6th and Lombard where a rally spotlighting the 21st Century Declaration of Rights, a list declaring a variety of human rights including living wages, a good public education for one’s children, good healthcare and interactions with the police that don’t include harassment.

While President Donald Trump wasn’t near Mother Bethel, his presence was felt, and so was the resistance to his policies. While Philadelphians can’t control what goes on in Washington to a certain extent, those wishing to turn back the clock will find that Philadelphia won’t make it easy.

“We’re saying that in this moment, we’ve come to resist,” said the Rev. Mark Tyler, pastor at Mother Bethel and a member of P.O.W.E.R. “We’ve come to say that we don’t care what happens in Washington, in Philadelphia we come to resist. We resist everything that says turn the clock back.”

Only through unity is that resistance possible, said Bishop Dwayne Royster, political director for the PICO (People Improving Communities Through Organizing) Network.

After the rally was over, the crowd broke into groups and began organizing on the various aspects of the 21st Century Declaration of Rights. The Reclaim MLK DARE group hopes to be able to hire a community organizer for the purpose of cementing the group’s efforts, Tyler said.