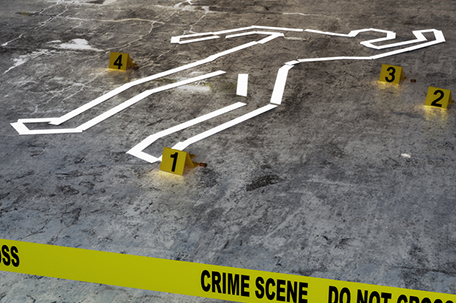 On Wednesday, September 28, 2016, at approximately 6:56 P.M., 18th District officers responded to the 6200 block of Hazel Avenue for a report of a “Person screaming, report of someone shot.”  Upon arrival the officers encountered a13-year-old male, bleeding from multiple stab wounds, and an 8-year-old male, bleeding from stab wounds to his neck and chest.  The officers were informed that a 32-year-old male, the father of the 8-year-old had assaulted both children with a knife.  A 12-year-old female also indicated that her father (offender) choked her and that he appeared to be under the influence of narcotics.  After assaulting the three juveniles, the male fled the scene. The two male children were transported to Children’s Hospital listed in critical condition.

Officers surveyed the area and received information that the male may be at Cobbs Creek Parkway.  Upon arrival at that location, officers observed the male exit the residence with his right hand in his pocket.  The officers gave the male commands to show his hands, which he initially refused. The officers indicated the male then removed his right hand from his pocket and had what they believed to be a handgun in his hand.

The officers then discharged their weapons, striking the male multiple times; he was taken to Penn-Presbyterian Medical Center where he was pronounced dead at 7:48 P.M.

Upon further investigation two additional victims were located inside 700 block of Cobbs Creek Parkway; The first victim, a 70-year-old female, who indicated that the male entered her residence and subsequently took a steak knife from her kitchen and cut her throat. She was transported to Penn-Presbyterian Medical Center, where she is currently listed in critical condition.

The second victim, a 41-year female, had been punched in the face multiple times by the male.  She was transported to Mercy Hospital, where she is currently listed in stable condition.

A search warrant was obtained for the Hazel Avenue address and a switchblade type knife was subsequently recovered.

The residence of  Cobbs Creek Parkway was searched and a steak knife with a broken handle was recovered from the kitchen area.

The male was later identified as 32-year-old Christopher Sowell from Hazel Street.

There were no other injuries as a result of this incident.

This incident is being investigated by Internal Affairs and will be reviewed by the District Attorney’s Office. The officers will be placed on administrative duty pending the outcome of the preliminary investigation.