Tribute: Gerald Wayne Renfrow – The Heart of a Lion 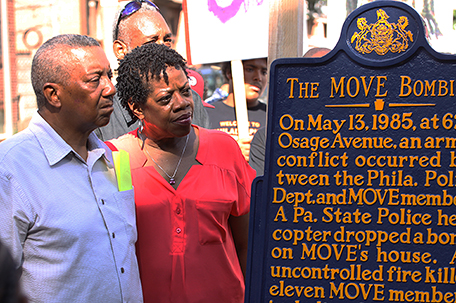 Gerald Wayne Renfrow was a man who was no pushover — he fought for what he believed in. He stood up for what was right and always held people accountable. And although he had the heart of a lion, his roar was always bigger than his bite.

When 36 abandoned homes were boarded up on the 6200 block of Osage Avenue and Pine Street in the aftermath of the 1985 MOVE bombing, Renfrow most famously gathered some of his neighbors and took the case to City Hall.  He was very angry and demanded action. He wanted those homes rebuilt and restored.

While many of the homeowners took buyouts, Renfrow and many other neighbors remained on the block. They stood strong on the case. They simply wanted the city to do their job and fix up those homes.

The city tried to satisfy the neighbors by building new homes, but after several weeks it quickly became clear the construction work never passed inspection. Renfrow discovered the electric wiring was faulty, the roofs were leaking, the plumbing was bad and all the ceilings in these homes were falling.

So, in early 2000, the city offered to buy back the houses for $150,000. However, Renfrow and many neighbors refused to accept the city’s offer.

With a dark cloud still hanging over his head, Renfrow had already led the charge and lobbied for five different mayors to get those neighborhood homes fully restored. It was a battle that he was determined to win.

It was back on May 13,1985, when a bomb dropped on 6221 Osage Avenue. That’s where the MOVE family lived. The bomb set off fires, destroying roughly 61 homes. In total, the fires burned down two city blocks and killed 11 members of the MOVE family. The bombing is still considered one of the worst incidents in Philadelphia’s history.

It wasn’t until 2017, when Mayor Jim Kenney’s administration hired AJR Endeavors to finish the redevelopment of those damaged homes. Once the job was done, all 36 redeveloped homes were sold for $250,000 or more, including the last Osage Avenue home, which was sold a few days before Gerald Renfrow passed away.

According to his widow, Connie Renfrow, her husband died peacefully on Sunday, September 13 at the age of 75. It is ironic that Gerald died as the final chapter of his work was being completed.

In 2017, a historical marker commemorating the 1985 Move Bombing was unveiled at the infamous site where it occurred.

Today, the marker sits along the edge of Cobbs Creek Parkway, opposite Osage Avenue. Both Gerald and Connie attended the ceremony. Connie remembers the tears her husband had in his eyes. It was a touching moment in his life.

During the service, the Rev. Marlon Jones gave a strong testimony about a man who dealt with many battles in his Osage Avenue neighborhood.

Jones spoke about a man who never allowed anything to stand in his way. Renfrow became a savior to his neighbors. Before he took over the leadership of the Osage Avenue/Pine Street Neighborhood Association, Renfrow was already serving as a  block captain on the 6200 block of Osage Avenue and served as their block captain for 35 years.

Before that, Renfrow served a number of years as a police officer. However, above everything else,  he was the proud owner of his roofing business, Renfrow Roofing, Inc., which he started in 1980.

Today, many people don’t know that Renfrow did many of the renovations at New Fellowship Missionary Baptist Church, where his funeral was held.

“Because his wife is an active member of this church, that’s how we made our connection,” Jones said. “Even though he wasn’t a member of our church, I always thought he was a good guy with an incredible sense of humor. He was a smooth talker, but very articulate. He made no apologies for being who he was. He never attempted to make himself into something that he wasn’t. Because the type of person he was, I would always gravitate towards that.”

During the funeral, there was plenty of singing and praising going on. The service was great from start to finish and ended on a great note.

Philadelphia singer Destinee Maree grabbed the microphone and sang the gospel hit, “Take Me To The King.” The attendees really enjoyed her performance.

When the funeral was over, many people gathered outside to give Connie Renfrow hugs and kisses. She was overwhelmed with the love she received for her husband.

A high point during the service occured when Gerald Renfrow was honored with  proclamations from State Senator Anthony Hardy Williams and State Representative Joanna McClinton. Along with those proclamations, a city proclamation was also awarded to Renfrow by members of Philadelphia City Council.