Traveling to Gambia, West African: My classmates and I were inspired by ancestral spirits-Part 2 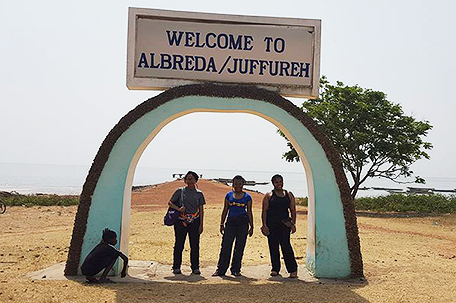 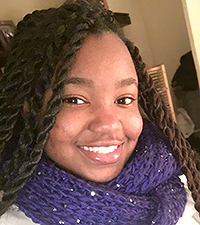 After departing the country of Senegal, my mood was somber. There was so much I learned about the country, the people and my initial perceptions about the experience. The knowledge I gained prepared me and my group of travelers for the next leg of our journey to the West African country of Gambia.

A trip to Gambia would not be complete without a visit to Kunta Kinteh Island, formerly James Island, located on both sides of the Gambia River.  As an African-American, the exploration of the island was important for me particularly for its relationship to the beginning and the abolition of the slave trade.   I was able to explore the site, which is now a UNESCO World Heritage site. 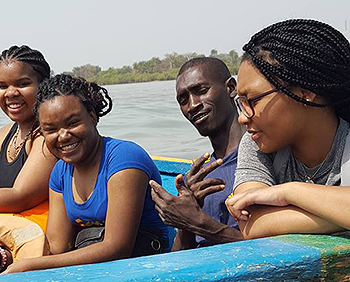 I often wonder if I have African ancestors who have links with my current family.

Kunta Kinte, most will recall, was a character described in Alex Haley’s book and TV series Roots and has become associated with James Island. It is believed that he was one of 98 slaves that in 1767 traveled on the slave ship Lord Ligonier to Annapolis, Maryland.

As I journeyed by boat to Kunta Kinteh Island with my classmates Darrien and Syferia, I began to experience a minor bout of motion sickness. Once we arrived on the island, the guide offered me some fruit from a local baobob tree, which he dislodged with rocks. Baobob is a fruit, found in West Africa, with natural healing properties. It is dry and it is eaten like a mint. It was pretty effective and I was feeling better within minutes of ingesting it. 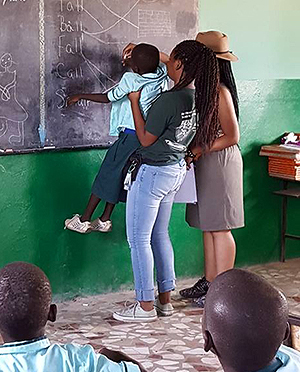 Once the group finished the tour, Darrien informed me of some interesting island facts. She noted that the island is diminished in size due to heavy erosion and natural disasters. At the top of the castle, we were able to see parts of the missing island, which is now 1/6 of the size when the fort was active. There were ruins of several British administrative buildings, including cells for unruly captive slaves, a small jetty and an array of surviving structures. They were built with the specific intent of thwarting the slave trade once it had become illegal in the British Empire, after the passing of the Slave Trade Act in 1807. These sites along with the island itself were abandoned in 1870.

While we were on the island, Darrien believed that she felt the spirit of her ancestors. So she decided to write a journal entry about this experience. Her journal entry recorded what she believed was a conversation with Kunta Kinteh:

My name is Darrien Johnson… But today I am Kunta.

Born in 1750, I was among the first who were enslaved from my village, in Jufurreh. I come from the Mandinka nation. We resided in a small village in The Gambia. We were colonized by the British.

When held in captivity, we were shipped across the river to be held at St. James Island. After the land began to erode, the British abandoned the island. Now St. James Island is about 1/4 the size of Love Park in Philadelphia. Maybe even smaller. However, our story REMAINS. Time to time, many tourist visit the land. Today in particular, a young lady caught my attention. She appeared to be no older than 17. I decided to write her a proposal. Given that I am only here spiritually I trust in the universe that she will receive it.

Following is the proposal that Darrien journaled she received from Kunta Kinteh:

Never forget the land from which you come from. Always pay homage to your ancestors. Commit yourself to a life of service and leadership. Love yourself and the Earth and they will love you back. Learn so you can teach others. Don’t take life for granted. Always be your brothers and sisters’ keeper. Share this with the world and PLEASE never ever forget to come back.

Following our trip to Kunta Kinte Island, we traveled to Imani Education Circle Nursery and Primary School. While there, we had the opportunity to teach the students and to beautify the grounds. The children were so happy to attend school. They took their education seriously. They were attentive and there were no disruptions. With the students, we played games and we sang songs.  We sang an engaging song called “The Banana Chant”.  Even the local village children, unable to attend school because they could not afford the fees, stood at the school gate and joined in the chant.  The time we spent with the young scholars was precious.

The experience was heart felt by me and my fellow peers. My classmate, Syferia, captured our experience in her journal this way:

Today was so hard because this was the last day at Imani Education Circle Nursery and Primary School and as I looked into their [student] eyes I told myself they are going to be alright. I don’t care about what the media says about them because in my eyes they are not poor. These children have everything they need, knowledge, love, family, health, and life. Everyone works together, eats together, are loyal, and have respect for each other…”’

My trip to West Africa was quite a learning experience. It provided me with a new outlook on life.

At home, I am often approached by people seeking information about my trip. Often times I receive comments about the lives and living conditions of the people we visited. Comments range from “Do people really live in huts?” to “How was it to see those children in those conditions?”

I discovered that there might be something wrong with people who allow the media to create this perception of Africa for them. All of Africa is not the same. We think of Africa as a country, not a continent.

What I remember most about my journey is that, for the first time, I felt totally comfortable in my own skin. I visited a place where the color of my skin, size of my lips, the width of my hips, and the shape of my body didn’t matter. For once in my life, I felt beautiful inside and out. I learned beauty is not a photoshopped-female in the magazine. Beauty is related to how you view yourself. I encourage more African-Americans to visit countries in Africa. Because, they, like me, will learn to understand a truer meaning of beauty, wealth, and family.

While visiting Gambia and Senegal I felt safe, loved and at peace.

Traveling to West Africa: Journal reveals a journey of self-discovery and transformation-Part 1