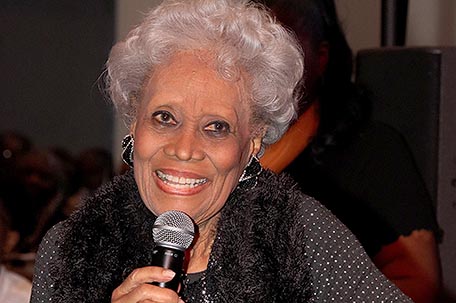 Philadelphia has lost another one of our beloved icons — the legendary broadcast journalist Trudy Haynes. Haynes died Tuesday, June 7 at the age of 95.

Born Gertrude Daniels in New York City in 1926, she was feisty and active until the end. Haynes was respected by many, admired by others and feared by some.

She would often speak about the racism and sexism she experienced during the early years of her career in the 1960s, working in an industry that was overwhelmingly dominated by white men. Still, Haynes made it through and became known as a trailblazer in the field of broadcast journalism.

Before breaking into broadcasting, Haynes was a poster model for Lucky Strike cigarettes. She began in radio first, followed by television, where she stayed until her last days. In 1963, Haynes became the first African American in the United States to broadcast the weather on television, when she was hired by WXYZ-TV, the ABC affiliate in Detroit. Two years later, she became the first African American to report the news on television station KYW-TV, now the CBS affiliate in Philadelphia, where she enjoyed a career that lasted 33 years.

Truly a pioneer in television for Blacks — and for Black women in particular — Haynes won an Emmy in 1995, two lifetime achievement awards, as well as top honors from the Philadelphia NAACP and a host of other organizations.

Haynes had a lot of juice, so whenever she spoke, people listened.

I recall over a period of about eight years, working for the United Negro College Fund Telethon as a volunteer host and a worker on the phone bank. When Haynes would enter the building, prepared to go on camera to make a plea for viewers to contribute to the UNCF, a buzz of excitement would permeate the room. “Miss Trudy is here,” some would whisper. Taking to the stage, she would look into the camera and as soon as she opened her mouth to speak about the UNCF, the phones would ring and volunteers were once again reminded why they were there.  In 1999, when she was inducted into the Philadelphia Broadcasters Hall of Fame, one thing was certain — Trudy Haynes left her mark on the region and the industry.

“Miss Haynes was the ultimate game-changer,” Philadelphia Association of Black Journalists (PABJ) president and Philadelphia Magazine editor-at-large Ernest Owens said in a statement on Twitter. “At 95-years-old, Trudy lived a life that broke barriers for Black journalists, women, and anyone who dreamed they could make it. She ushered in a new generation of diverse journalists in America,”

Ukee Washington, who was on vacation at the time of Haynes’ passing, upon learning of her death, shared this statement; “My heart is heavy right now. It is also filled with a deep love and incredible respect for Miss Trudy Haynes. She will always be my hero. I, like so many others, stood on the shoulders of greatness, a pioneer who was fearless, courageous, extraordinarily gifted and blessed. So talented and gifted and personable, on the air and off. If she didn’t know your name, she would affectionately call you “darling.” I will never forget her, the trailblazer she was, and all she stood for. Thank you darling, from the bottom of this heavy heart, Rest well. Great job well done.”

Patty Jackson, on-air host at WDAS/FM, recalls being with Trudy Haynes during an event celebrating outstanding women recently in which Haynes was among those honored.

“We honored her this past April for our Women of Excellence luncheon,” Jackson said. “I handed her the microphone, and she shared such encouraging words for those women coming into the business right now. Standing in front of her, it bought me to tears.”

“Trudy was always helping women who wanted careers in television, and she was responsible for a lot of people getting jobs in television and in radio,” said former Philadelphia TV news anchor Larry Kane, who also worked with Haynes at CBS-3. “So, I think the contributions she made were pretty extraordinary.”

Pat Ciarrocchi, one of Haynes’ former colleagues at Eyewitness News, spoke about when she first took notice of Haynes.

“I used to watch her on TV as a little girl, living in Chester County,” Ciarrocchi recalled. “I was awestruck by her presence long before I got to work with her. When I walked into the newsroom on my first day in 1982, she was one of the first people in the newsroom to greet me. She greeted me with such graciousness and warmth. I could barely speak. Why? Because I was standing in front of Trudy Haynes.”

A longtime fixture at Eyewitness News, working there for some 30 years, Haynes was a beloved member of the Philadelphia community. She joined the Channel 3 news team in 1965. A graduate of Howard University in Washington, D.C., at Eyewitness News, she hosted several programs, including the “Trudy Haynes Show,” “Sunday Magazine” and “Sunday Side-Up.”

Haynes started out in Philadelphia as a reporter and weatherperson. Her beat was local politics, covering City Hall developments and school board meetings. Haynes’ interviewees ranged from national figures like Dr. Martin Luther King, Jr., President Lyndon Johnson, Senator Hubert Humphrey, and Jimmy Hoffa, to a number of Philadelphia mayors and Pennsylvania governors. Later in her career, Haynes also interviewed show business personalities. She retired from KYW-TV in 1998.

Haynes was an advocate for civil rights, women’s rights and underserved communities. Until the time of her death, Haynes never gave up on her love for broadcasting and sharing information.After her formal retirement, Haynes said she was sometimes greeted fondly on the street, or any place she went.

“People come over to me to say, you know, they miss me, and wish I still was around, and that they like what I did,” she said once. “And I think that’s important to a person.”

Still, in her last year of life, Haynes shared with me that she felt like a lot of people in Philadelphia had forgotten about her, or who she was, and that saddened her. The reality is, many in Philadelphia and around the tri-state area do indeed remember the name, the voice, and the face of the one and only, amazing, trailblazing Trudy Haynes.

Haynes’ career did not end with her retirement. After turning in her microphone over at CBS-3 TV, she remained active in the Philadelphia media world. Working on a freelance basis, she appeared on various local television shows, including WPHL-TV’s “Philly Connection,” PAX-TV’s “The Good News,” and Comcast Cable’s “Let’s Talk About It” and “Trudy Haynes Discovers Delaware.” She also established a production company, First Run Film/Video, which generates her show segments. Despite her status as a mainstream media personality, Haynes became an active member of the Philadelphia Community Access Coalition, a lobbying group whose mission is to create public-access cable channels in the Philadelphia area.

Up until recently, Haynes continued to host a show on the local Philadelphia public access channel called “Trudy and Friends,” where she mentored aspiring broadcasters with the show, showing them how to get their programs in the can.

As of press time, arrangements for her homegoing service have not yet been finalized.