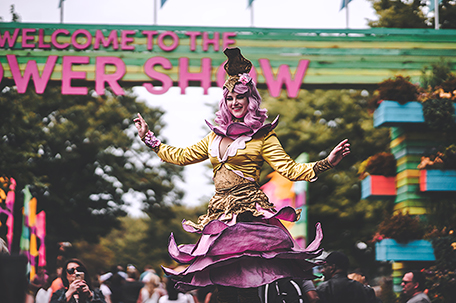 There was one main theme that seemed to be present at this year’s Philadelphia Flower Show, which concluded last Sunday: tradition. From the well-loved plant and floral design exhibitions and demonstrations to family-oriented activities, the upholding of new traditions and creation of new ones was combined with the intention of bringing the best of the Flower Show’s many experiences into the 21st century.

The ability to expand and offer new experiences due to this year’s outdoor event space at FDR Park in South Philadelphia was an experiment that appeared to be a success with both new and returning attendees.

Many of the challenges brought about by unseasonably hot weather, pop-up thunderstorms and the predictable chaos that accompanies any new event were taken into stride as the organizers received criticisms with an open mind and addressed issues head on.

The final weekend of the Flower Show has traditionally been very well-attended, and this year was no exception. Last Saturday drew in many young people from the city, region and nation, many who were first time attendees along with those who have attended for decades, creating an intergenerational balance and excitement.

For friends Shanita Brown, 39, who hails from Virginia and Aurelia Moore, 34, a Texas native, it was the first time either woman attended the show. Both now reside in Maryland. Brown was impressed.

“I love flowers,” Brown said. “Even just coming in [ at the show’s main entrance] where they had the sound bath meditation outside — I think it’s just perfect. I think it gives more life to the visuals — I love it. To me, it feels like it belongs out here.”

Both women would love to attend future Flower Show events. However, they offered some constructive criticism and input for organizers should they want to expand upon the outdoor venue idea.

“I love outdoor installations. I think they do bring life, and let you interact more and see flowers — and different types of flowers — in their natural habitat,” Moore said. “But I’m also very much into flowers and appreciate smaller installations that do better indoors, where you can walk through and interact a little bit more, and they’d feel more grand in the Convention Center, I would imagine. Outdoors, there’s more space, but if you put this (the exhibits in the Design District) inside with a lower ceiling, it would feel more grand. So, I would probably enjoy it more if they kept it outdoors but had some indoor portion, I’d probably be in heaven. You would feel the difference, and what it’s like to be outdoors in a Zen garden, but also what a table setting might look like indoors.”

Brown agreed, adding that an earlier date would help make the experience more enjoyable and comfortable for many people like herself who do not like extremely hot weather.

“I like her [Moore’s] idea, where they might do a portion indoors and a portion outdoors, but I think people would enjoy it more if it’s not super hot,” she said.

Moore sees the reimagined Flower Show as a positive by-product of the past 15 months, an opportunity to keep an open mind when it comes to all event planning going forward.

“I think COVID gave us the opportunity to rethink some things that are annual, and why we have them at certain times, and (give) us that space and flexibility to say, “‘Hey, it’s still annual, but we maneuvered the tradition to be more welcoming for hopefully more people to enjoy,’” she said.

Another big draw for new attendees last Saturday was Family Frolic Day, where families enjoyed performances from Orchestra 2001 and the Pennsylvania Ballet, crafting opportunities and a live paint demonstration from the Power of Paint, science activities with the Monell Center and more.

Gritty — the quirky yet beloved Philadelphia Flyers mascot — was also on hand for photo ops, wearing a flower garland around his head for the occasion as he danced and bounced around for the kids, much to their delight.

In addition to the academy, the West Philadelphia-based organization runs an assisted learning center, summer camp and more.

Founder and creative director Vanessa Young spoke about how vital, therapeutic role the three-year-old organization plays for children in the city, nationally and globally.

During the pandemic, the organization was able to reach children with trauma who were really struggling, especially locally, Young said.

“We have a hybrid program; we started off with an in-person program, but when COVID happened, we just reshaped our whole program and turned it into a virtual program as well,” she said. “Then we started delivering the packages to doorsteps; we literally knocked on about maybe 300 doors a week delivering supplies [locally]. Immediately after delivering, we’d go on Zoom and I’d teach the classes.”

The organization also enjoys connecting with the public through local events. This was their first year at the Flower Show, although not Young’s first time as an attendee; her grandmother used to take her to the annual event at the Convention Center, she said.

For an event which tried to strike a balance between old and new in a relatively short planning time, it turned out surprisingly well. All feedback from this year’s attendees — whether positive or negative — will assist PHS in planning next year’s show and beyond.

The increased footprint of this year’s show also provided a great opportunity for PHS to invite attendees to become members and showcase the many programs PHS sponsors throughout the year. These programs include PHS Harvest — which supports food banks, community garden programs and more throughout the city — a workforce development program, and so much more.

For more information about PHS programming and membership, visit: www.phsonline.org