Trades For A Difference (TFAD): Creating work options for adults of all ages 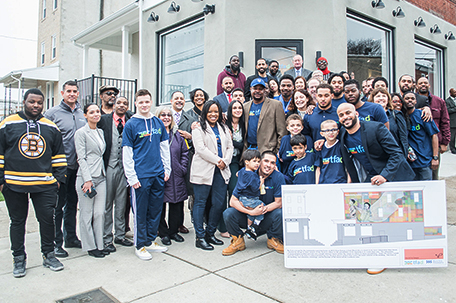 Entrepreneur Jordan Parisse-Ferrarini is on a mission to introduce youths and adults of all ages to the option of going into the trades.

Through his nonprofit organization, Trades for a Difference, he hopes to make that introduction.

Located at 6612 Chew Avenue, Trades for a Difference has the mission of helping people interested in starting their own construction and contracting businesses obtain the skills to do so. The building, which features a mural courtesy of the Philadelphia Media Arts Program, the organization is housed in was a building that was a longtime eyesore in the surrounding working-class neighborhood.

The building will help to show the neighborhood what’s possible, Parisse-Ferrarini said.

“What this center will be used for is a vehicle for prosperity education,” Parisse-Ferrarini said. “This will show those who come, that there are careers in the trades that don’t require a college degree. It will also show why they need a good education because I learned the trades first. I was self-taught, but then I got training before I went to Temple University for construction management. The process can start here.”

Parisse-Ferrarini started out as a self-taught tradesman. He then received vocational training as an electrician and in other areas. While working in the trades, he started his own business, went on to get higher education degrees in business and construction management, and now he’s determined to help others become trades masters or own a construction company.

Among those who came out to his gala grand opening were Mayor Jim Kenney and State Rep. Chris Rabb. Also on hand were about a dozen youngsters who were already exploring the computer corner. 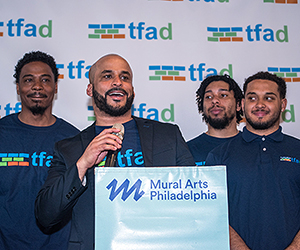 As someone who grew up in the neighborhood, Parisse-Ferrarini is proud of the fact that Trades For A Difference is  providing a service to the neighborhood. His mother wanted her children to grow up in a decent community and made a lot of sacrifices to enable him to live in Mt. Airy and attend schools like the Henry H. Houston Elementary School. This solid education was the foundation for him to gain mastery in many trades as well as complete his degree at Temple University after studying at Community College of Philadelphia.

“I have been very blessed and fortunate in my life,” he said. “I am glad to receive some support and financial backing to start this. All the proceeds are going into the center. I want others to know that they do not have to be stuck in low paying jobs and there are many opportunities working in the trades.

“Right here, we want many to get what they need to become electricians, learn carpentry, design designs, plumbing, to be [a] handyman, and maybe get the foundation to become an architect,” Parisse-Ferrarani continued. “People often forget that the trades have an intellectual side — the architects, the engineers. Then there are the professionals like the project manager and other managerial positions.

No matter what level you are in the trades, you can become an entrepreneur. It is possible to earn a lucrative career like $80,000[/year] in a trade without a degree. This is going to be the vehicle to expose many to all of that. This place is for children, young men and women 19 to 22 and all adults even if you are 55 and up. There are many lucrative opportunities in the trades.”

Patricia Jones of Mount Airy was among those who stopped by the Grand Opening.

After seeing the building abandoned and run down for years, she was glad to see the rejuvenation.

“This is just a blessing to walk down Chew Avenue and see this beautiful building. It is just great to come in here and see all the services they will provide.” Jones said.

For more information about Trades For A Difference, you can reach them at their office number (267) 270-5095, by email at [email protected] and on their website, at http://www.tradesforadifference.org.

Senior volunteers make a difference in the lives of older adults