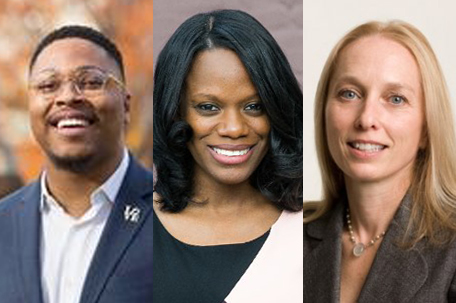 A historic number of seats were won or retained by people of color, women, millennials and other young adults, beginning a new chapter in the Commonwealth’s political history.

Even in the midst of one of the most tumultuous political climates in the past 50 years, a determined group of Pennsylvanians comprised of women, people of color and young adults— many under the age of 50 — took up the challenge of running for office and won on November 6.

“I think it’s an evolution,” Mayor Jim Kenney said. “I’m 60 years old; at some point in time, I’ve got to hit the rocking chair and the porch. There needs to be people to take our places, people that live in the city and who are committed to doing good for the city. I’m all for it.”

Not all of Tuesday’s newly minted representatives are under 50, however.

Mary Gay Scanlon was one of four Pennsylvania women elected to Congress on Tuesday, ending many years of a male-only delegation. Previously, there has only been seven women who have represented the Commonwealth in Washington.

She will be serving South Philadelphia and Delware County in the newly formed 5th Congressional District. Scanlon, 59, is one of many people across the candidates across the country who either entered the political arena for the first time, or have found themselves re-engaging with the process, spurred by the results of the 2016 presidential election.

Forming coalitions with all elected officials and constituents will be key to successful governance. It is important for everyone involved to stay focused on what they all have in common, Scanlon said.

“I think they all want government that takes us to a higher place instead of to a gutter,” she said. “[All are asking] ‘how can we make things better for everybody?’ as opposed to ‘how do we divide everybody?’ They want government to work and not just to be about ‘if you win, I lose’ and vice versa. It’s about personal dignity.”

Kenney was excited about historic numbers of women who ran for office this election cycle, and believes that this can only be a good thing.

“I think it’s wonderful,” he said. “It’s better to have more women involved. As a man I can say this; [I believe that] women tend to work more collaboratively together, and don’t have the same ego issues men sometimes have.”

Malcolm Kenyatta — son of the late Kelly and Malcolm J. Kenyatta, Sr., grandson of the late civil rights leader, politician and minister Muhammad Kenyatta — bested T. Milton Street in the race for State Representative for the 181st House District. The seat was previously held by his cousin, 15-term incumbent W. Curtis Thomas. He is making history as the first openly gay person of color ever elected to the Pennsylvania State House.

Kenyatta has been a community advocate and activist since childhood. His lifelong dedication to eradicating poverty, bringing everyone to the table to solve problems and justice is something that he plans to expand upon as a legislator in Harrisburg.

“I come with a message that I hope they hear all around this country, all around this Commonwealth, and all across this city – that anything is possible,” he told supporters during his victory speech on Tuesday. “I want to let you know that the sky is not the limit for the work we’re going to do together – the sky is the floor.”

Kenyatta is also dedicated to coalition building, a ‘big tent’ approach and collective responsibility. That said, he acknowledged that the road ahead will not be easy and will require dedication and hard work.

“This is not just about me, this is about us,” he said. “The victory is about us, this campaign was about us and the work that we have yet to do together is about us. So, when I hear people ask, ‘Malcolm, what are you going to change the entire 181st District?’, my question back to you is, ‘What are we going to do together?’ We have an opportunity to build on the work that we’ve done. This was the easy part, in so many ways. Going to Harrisburg, where we’ve had Republican control in the legislature, where they do not believe in the things that we believe in, that’s the hard part…I’m going to need you guys every step of the way.”

“You believed that a 28-year-old from Springfield could do it…this is only the beginning of a long road to change Pennsylvania and Delaware County,” O’Mara said during her victory speech.

As the traditional rough and tumble political machine political model continues to be replaced by a fast paced, egalitarian model, many candidates are running as independents, third party candidates or are finding other ways to make lateral moves into the two established parties work for them. Collectively, they are beginning to slowly change the face of the established political landscape in the Commonwealth.

Community organizer and attorney Summer Lee, 30, a graduate of Howard University School of Law, was one of several Democratic Socialist of America endorsed candidates in Pennsylvania who won on Tuesday. Lee ran unopposed in the race for State Representative for the 34th House District. The Swissvale resident will be the first African-American woman to represent Western Pennsylvania in Harrisburg.

As of press time, another DSA endorsed candidate, Kristin Seale, was trailing incumbent Chris Quinn in the race for state representative in the168th District in Delaware County by an unofficial 758 votes, and wants to wait until all ballots — including all absentee ballots, provisional ballots and remote military votes — are counted on Monday before either conceding or declaring victory because she considers the result “too close to call”, according the Delaware County Times.

The sea change in the Commonwealth’s political scene presents a myriad of opportunity for a new group of leaders as they seek to get back to the basics by connecting with their constituents on a personal level — as neighbors, fellow community members and as advocates. It was an approach many took as candidates, and plan to continue and encourage as elected officials.

“We talked with real people about the issues they’re facing in their lives. We treated them with dignity and respect by showing up at their doors and listening,” State Rep. elect Fiedler said in a Facebook post thanking her campaign supporters on November 7. “Do not let anyone else tell you what is possible. The future is unwritten.”