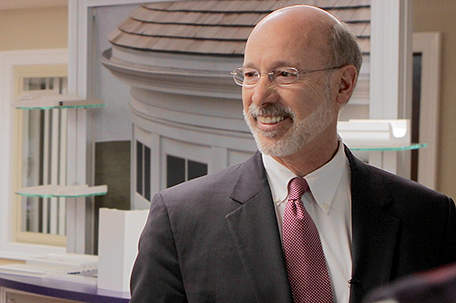 But can a former Peace Corps volunteer who drives a Jeep and is financing this campaign with $10 million of his own money beat Gov. Tom Corbett? He thinks he can.

As he walks into the La Columbe coffee shop in Center City, that’s the first thing you notice about the current front runner for the Democratic nomination for governor.

Wolf is accessible in a way that doesn’t necessarily scream “politician” or “multimillionaire.” In fact, if you didn’t know that he’s running for office or that he’s probably one of the richest Jeep owners in America, you’d think he was just another businessman grabbing a coffee before heading to a meeting.

But he’s not. And you can tell this because most Center City businessmen aren’t asked their views on legalizing marijuana or the state of the School District of Philadelphia. He takes time to answer every question, shake every hand, and listen to every suggestion from the people hanging out at the coffee bar on a recent afternoon.

In a field that includes people like Cong. Allyson Schwartz, former Pennsylvania Environmental Protection Agency Secretary Katie McGinty, and Treasurer Rob McCord, Wolf, a businessman from York making his second run at the office, wasn’t the one projected to be leading the pack. But by being the first candidate with television ads and hitting all the right places, he’s managed to make his presence felt.

We made contact with several public officals for their thoughts but did not receive a response as of press time.

He’s a graduate of Dartmouth, The University of London and the Massachusetts Institute of Technology, but between getting all of those degrees, he did a stint in the Peace Corps.

Wolf spoke to the SUN about why he’s running for governor, how it lines up with his service in the Peace Corps, and why Southeastern Pennsylvania has nothing to fear from this Son of the “Pennsylvania T”.

SUN: Hello Mr. Wolf and thanks for the time. I guess that my first question is, what made you as a successful businessman decide to run for Governor?

TW: That’s exactly why I decided to run for Governor. I believe in getting things done. I’m a native of Pennsylvania and I think that we can do a lot better than what we have in Harrisburg. I’m excited about the possibilities.

SUN: Is this the first office you’ve ever run for?

TW: No. I started to run for governor five years ago, but I suspended my campaign because the business I had was about to go under. I took it back and turned it around, so now I’m running again.

SUN: If you manage to win the office, what will the first 100 days look like?

TW: The very first thing that I’ll do if I’m elected is issue an executive order on ethics that would ban gifts for any of my appointees. I also want to make things more transparent in terms of legal contracts so that Pennsylvanians can see who is getting what and why.

SUN:How do you level the playing field?

TW: First of all, you don’t rely so much on property taxes. We need to increase our share of educational funding. I also think that 5 percent of the Marcellus Shale taxes I propose should go to funding schools.

SUN:I’m glad that we’re talking about education because I’m sure that it’s something that’s been brought up to you as you’ve campaigned through Philadelphia. As you know, the School District of Philadelphia is under state receivership and has been hit hard by the educational cuts in Harrisburg. You’ve expressed a desire to reverse the educational funding cuts and bring about funding equity, but how do you feel about possibly restoring the district to local control?

TW: Philadelphia was unique educationally even before the SRC. It was the only district in the state that had a non-elected school board. I would consider giving the district back to local control because the subtle implication in the creation of the SRC is that Philadelphia should have non-Philadelphia oversight when it comes to its school district. Locally supported education makes a difference and when it’s not there, it diminishes the quality of life for all of us. The School Reform Commission stands in the way of acknowledging this responsibility.

SUN:Another issue that’s kind of big around here is the issue of healthcare. Pennsylvania, as you know, is one of the states that decided not to participate in the Health Insurance Marketplace of the Affordable Care Act by starting its own exchange and also didn’t take the Medicare Expansion money. What is your approach to healthcare and what would it look like in your administration?

TW: If Pennsylvania had taken the Medicare Expansion, thousands more people would have access to healthcare. We should at least try to be trying to make it work instead of making it fail. Do you know where most of our health care costs come from? It comes from uncompensated care in emergency rooms. There is a business case for healthcare.

SUN: My last two questions come from an historical perspective.

Historically, when someone from the western part of the state is sitting in the governor’s office, Southeastern Pennsylvania in general and Philadelphia in particular has a much harder time. There seems to be a disconnect People from Western Pennsylvania tend not to understand some of our more unique issues, like the SRC, which you’ve addressed, and our desire to have a sensible gun control policy when it comes to our city. So my last two questions are: What can Southeastern Pennsylvania expect from a Tom Wolf administration and does it include addressing our safety issues?

TW: I’m from the “T”, where the beginning of Deer Season is a holiday. But York has the same issues that Philadelphia has when it comes to violence. While local control when it comes to guns doesn’t work if you’re suspending the Bill of Rights, we have to reconcile that with the fact that a kid should be able to walk out of his or her house without the fear of getting shot. Safety is a civil right for everyone, and if we can’t do something about that, that’s a problem.

But I’m someone from the “T” that appreciates Philadelphia. I understand that if Philadelphia does well, then Pittsburgh does well and York does well. We’re all connected.

SUN:Thank you so much for your time, Mr. Wolf. I really appreciate it.