Time to end the SRC 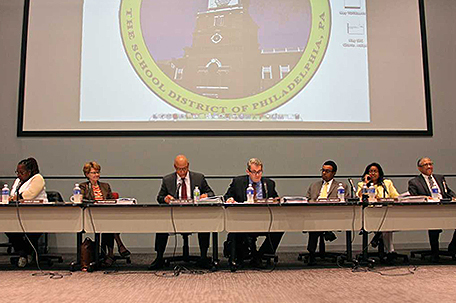 We don’t wish to be crude, but the School Reform Commission has long overstayed its welcome in the City of Brotherly Love.

The state takeover of 2001 is a failed experiment and a ground swell calling for the end of this rogue commission is growing. Gov. Tom Wolf has made no secret of the fact that he’s unhappy with this body and outgoing Mayor Michael Nutter publicly called for an end of the SRC governance over Philadelphia schools.

While we’re not fighting segregation as a district, the School Reform Commission is proving to be a major obstacle. Philadelphia is the only municipality that doesn’t have an elected school board and the SRC, the board put in place by the Commonwealth in 2001, has gone rogue, assuming unauthorized powers for a number of years now. The SRC placed caps on Charter School enrollment,  overruled seniority policies in the name of empowering school principals and recently decided to turn a school over to a charter company with an 11th hour vote during a board meeting.

The SRC’s argument is that public education in Philadelphia is like a terminally ill patient. We could never really hope to have self-governance unless the state restores the city back to it’s previous levels of funding. Because recurring funding is an issue, the search to find money to open every year becomes one of desperation.

If the district is terminally ill, we don’t need the SRC to sit by our bedside waiting for the evil accident of time. We may not have all the funding to function above a deficit, but just like we don’t surrender authority or decision making power over our household when money gets a little tight, the School District shouldn’t be surrendering its power to an unelected board. Finally, our budgetary funding would be recurring when all stakeholders meet their legally mandated obligations to public education. We should remember that we are not in discussion about someone else’s money, but the proper redistribution of our own.

The truth is, public education is saddled with a special set of problems. Achievement gaps in learning, usually in targeted areas of poverty stricken citizens, has led to zip codes determining destiny for our city’s children. The NAACP is committed to “Trauma based education” because it recognizes that a more holistic approach to education is necessary for better outcomes. The absence of proper nutrition, medical and dental attention can be impediments to a child’s academic progress. Studies reveal that background and socioeconomic status impact greatly on a student’s concentration, confidence and determination levels when engaging classroom demands.

Local control of public education offers the opportunity to retrofit the learning experience to reflect a child’s environment. After all, a real education teaches one how to think. Real education helps students to overcome impediments to their own success. Certainly there will be budgetary challenges of enormous proportions, but that’s already something we have with the SRC. Despite what we were told when this experiment in public education began, the deficit gap still goes unfilled and educational outcomes have not improved.

A local school board would place curriculum in the hands of residents, would allow us to decide who gets the contracts for needed services, keep counselors in the schools and make certain books are supplied to every student. It would also end a lot of things that have led to public embarassment nationally, like school bathrooms without toilet paper.

In other words, the needs of the School District of Philadelphia would be addressed by parties that are much more concerned than the people currently running things.

The NAACP, along with other stakeholders, has filed a lawsuit to address the deliberate underfunding public education. We are waiting for the Commonwealth’s Supreme Court to receive this case and render a final judgment. But in the meantime, despair and hopelessness rises, the politics of desperation set in, and parents cry out for change.

While the School District of Philadelphia may have had its problems with budget shortfalls, discouraged faculty and other issues, there is no argument for maintaining the current governance structure. Discouragement among faculty, an outraged public and the fallout of an environment of low expectations will lead us to produce a society of underachievers if we don’t act swiftly and decisively.

It may have taken us 15 years to get to this point, but it’s time that we recognized that the School Reform Commission is not the solution to the School District of Philadelphia’s problems.

It has now become the problem itself.