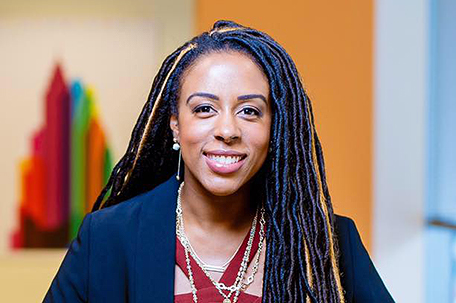 It is easy to understand why entrepreneur Tiffanie Stanard was honored at the National Coalition of 100 Black Women’s Pennsylvania Chapter’s 31st Annual Madam C. J. Walker Awards Luncheon. Like Walker, Stanard runs many businesses. This accolade went to young entrepreneurs, like Stanard, as well as students during the segment that recognized awardees, honors and scholarships. The event was held at the Philadelphia Sheraton in Center City on Saturday, March 11.

Stanard received the entrepreneurial spirit while still in high school. After graduating from Little Flower High School she opted to take a hiatus from academia while she explored a marketing internship. Then while working a variety of full time, part time and temporary jobs, including being a payroll specialist, she finally decided it was time to merge her knowledge of computer technology, marketing and public relations and business management.

So, that is when Prestige Concept was born in 2009. She used the tuition remission benefits from her payroll to pay for part of her education with nonprofit courses Villanova University and business courses at the University of Phoenix. Even after her business was booming and her degree requirements were completed she took an additional technology course at the University of the Arts.

“Specifically what Prestige Concepts does is show for profit companies how they can have social impact, Stanard said. “Many for profit businesses have a gap between their for-profit side and their social nonprofit foundation. Some just want to donate money without having an official foundation.

“So, what we do is help them get their messaging across. We help them to know what they need to promote their company, the for-profit side, with the social side. We do this even for those who just want to occasionally give money donations,” Stanard said.

Stanard has been able to attract clientele that includes corporate giants. Among her 2017 roster of companies are Microsoft and AT&T. One would think that she would be content with having major contracts. Sometimes she can be found traveling to places like San Francisco, where she spent earlier this year, trying to engage in venture capitalism on the West Coast or attending a technology conference in Austin during mid-March.

Yet a year ago Stanard started an additional business venture, Stimulus. This is a technology company. She insisted that this is not a branch new company, but really an appendage to Prestige Concepts. This helps bridge “the middle gap” between companies and donor recipients, by matching the right combinations.

“We work with major corporations and then find the right recipients for their donations,” Stanard said. “So, I am still working with AT&T and Microsoft as well as others on this. We did our 2017 launch with a database that has a list of different grants and sponsorships primarily for businesses owned by minorities or women.”

This venture is yet a stepping stone for what Stanard hopes to ultimately do. Currently she has a radio show that airs on 100.3 FM in Philadelphia. She is also working with various media companies. She has her sights set on getting into the entertainment industry with her companies, and perhaps even hosting a television show.

Her long range goal is to have her business ventures reach an international market. Though she is excited that she is making a name for herself in Philadelphia and other American cities, she sees that there is a wide world. “Though various investments and media companies I plan to look at having a global share of businesses and investments,” Stanard said.

Currently, Stanard said her impetus for her business acumen was increased when she became involved in civics and politics. Besides working on political campaigns, she was a political director for a Voter ID educational program that took her across the commonwealth to cities like Harrisburg and Pittsburgh. It was through this type of civic engagement that she honed her public speaking and organizing skills, she said.

“When you talk about social justice and for profit companies giving back, it’s all about helping the homeless and building shelters, helping community members to be more civically engaged, and working with government. It’s all connected,” Stanard said.

Stanard, 31, easy-to-get along and congenial personality has also helped her on her entrepreneurial path. This is evidenced by the fact that when people misspell both her first and surname she takes it in stride. She said that this is understandable and she does not get offended. In fact, she anticipates seeing her name spelled “Tiffany Standard” and even laughs it off. Soon enough she anticipates her uniquely spelled name will set her apart from her global competition.