Three who saved the City’s NAACP 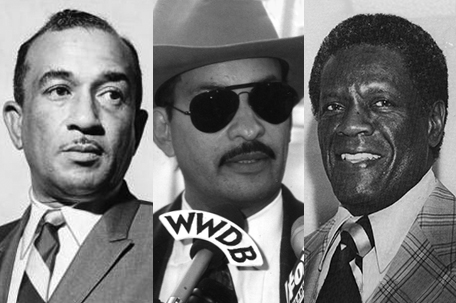 [Ed. note: This article was originally published in the February 2019 edition of the West Philly Weekly.]

Joey Temple, a North Philly-based activist, remembers the early years when the city’s National Association for the Advancement of Colored People, better known as the NAACP, was a quiet organization that attracted little media attention for its efforts to fight for equality in Philadelphia.

Then came a young man from West Virginia, says Temple, his name was Cecil B. Moore.

“Cecil built the (NAACP) branch (from 7,000 to 50,000) into the largest in the country,” said Temple. And, he showed Black Philadelphians not to be afraid of the White establishment.

In fact, Moore, a lawyer, was so brash and loud that he scared some White people and got the attention of the main media.

Moore came at the time of the Civil Rights Era challenged racism. He was also the right man for the right time for change in this city.

Temple credits Moore for helping to bring down the “White male orphans only” wall that kept Black youngsters from a good education on the grounds of Girard College.

It was “17 days for 7 months” of rallies outside the wall led by Moore and Temple that toppled the 19th Century merchant Stephen Girard’s will that kept Black kids out.

His second most notable achievement was to persuade – with the threat of violence — the Mummers to stop using black face in their march up Broad Street.

Moore was so effective, loud and rambunctious that some Black leaders sought to curb his influence by breaking the city’s NAACP branch into five chapters. Such moves weakened the organization’s effectiveness in the years to come.

But not for long, Temple said. He credits Alphonso Deal, a former police officer and a state representative for challenging the racism associated with then Mayor Frank L. Rizzo.

Deal, a Floridian native, was also a founder of the city’s Guardian Civic League, an organization for African American cops.

Deal’s branch was called the “Action Branch” and was based in North Philly, but had an impact citywide when any racial issue arose, especially accusations of police brutality that went unchecked during the Rizzo years.

“It was an ‘action’ branch,” Temple said.

Finally, Temple credits Jerry Mondesire, who fashioned himself as an updated Cecil B. Moore, who wore Stetson hats and cowboy boots, revived the unified NAACP.

Mondesire, a New Yorker by birth, rejuvenated the city branch.

Temple credits him for increasing membership, making the branch financially stable and becoming an outspoken and leading voice for Black folks in Philadelphia.

His greatest accomplishment, according to Temple, was getting ex-offenders the right to vote. He also challenged the voter ID legislation and problems in the educational system.

However, Mondesire’s leadership was derailed by the inner conflict that accused him of misusing the group’s funds forcing the National NAACP leadership to remove him and three others from their elected offices.

Mondesire, who founded the Philadelphia SUN newspaper died suddenly on October 4, 2015. He was 10 days short of his 66th birthday.

Mondesire was an editor at the Philadelphia Inquirer, one of the founders of the Philadelphia and National Chapter of the Association of Black Journalists and was the right hand man who ran then Congressman Bill Gray’s office.

Deal passed away while still holding his State Representative’s office in 1987. He was 64.

And Moore, sickened by years of cigar smoking and other habits, died while sitting as a city councilman in 1979. He was 64.

Temple is a long-time community activist and has a radio show featuring music that airs every Friday night from 12 midnight to 6 AM on WURD 96.1 FM and 900 AM.