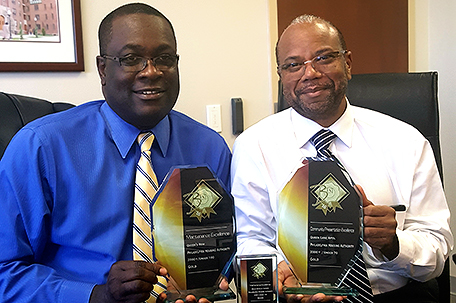 Queen’s Row, a 29-unit development in Germantown at 500 W. Queen Lane, received a Gold Award in the maintenance category with a score of 95 percent. PHA totally rehabilitated the site – in an attractive neighborhood just a block away from a regional rail station – after purchasing it from the HACE CDC several years ago.

Nellie Reynolds Gardens in North Philadelphia received a Bronze Award for Maintenance with a score of 93 percent. The Apartment Association was complimentary of the senior development’s atrium area that measures 3,000 square feet and features an indoor garden. Nellie Reynolds Gardens is PHA’s first totally green building located at 25th Street and Glenwood Avenue with a 20,000 square foot green roof.

The new Queen Lane Apartments at 300 W. Queen Lane received a Gold Award for community presentation with a score of 91 percent. The 55-unit development replaced a hulking, outdated high-rise that formerly occupied the site and now features a large, historic green space that once contained a potter’s field burial ground. The judge who visited the site noted that Queen Lane has efficient accommodations for people with disabilities, including those people who are hearing impaired. That feature resulted in four bonus points which put Queen Lane over the top for the Gold Award.

“We greatly appreciate it when our colleagues in the leased housing industry recognize the work that PHA is doing to create quality, affordable housing throughout Philadelphia,” said PHA President and CEO Kelvin Jeremiah. “PHA holds its property management team to a high standard. We want our developments to improve the communities where our developments are located. These awards are a great inspiration to all PHA employees to continue the hard work that’s necessary to achieve excellence.”

The Pennsylvania Apartment Association (PAA) received 250 entries in this year’s “Best in Apartment Living” awards with the vast majority of those entries coming from private sector developments in the city and the region. Other PHA sites were entered and scored 80 percent or above in either the maintenance or community presentation category. That reflects solid property management, but the bar for the awards is set high so that only the highest rated apartment communities are recognized.

The PAA hires judges from outside Philadelphia to inspect apartment complexes and score each site for award consideration. The process keeps the judging impartial and reflects what a member of the public might see when visiting a site for the first time.