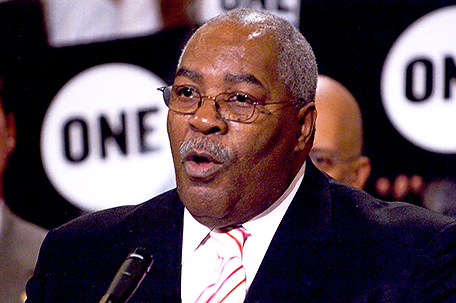 State Rep. W. Curtis Thomas, D-Phila., held his second in a series of news conferences last week to discuss the state of the budget impasse and the crucial need to invest in our students and schools.

Thomas updated the gathered community members about the current state of the budget impasse, reminded them about the $1 billion in education funds cut by the previous administration and explained the need to properly invest in students to better prepare them for a global economy.

“After years of harsh cuts, I am glad to see that Gov. Wolf understands what needs to be done in order to turn our schools around and ensure each and every child in the commonwealth receives a quality and thorough education like our state constitution requires,” Thomas said. “What Gov. Wolf proposed earlier this year is truly a transformational budget that would lift our schools into the 21st century and prepare our students for a modern workforce.”

Wolf’s proposal also would have increased funding for higher education by $148 million, with $45.3 million devoted to colleges and universities in the Pennsylvania System of State Higher Education. Thomas explained that the increase was sufficient to get the PASSHE Board of Governors to agree to a tuition and fee freeze, but that freeze was rescinded after the Republican majority in the General Assembly passed a spending plan without the funding increase.

“As higher education becomes ever more important, the Republican majority has made it harder for average Pennsylvanians to obtain it by not backing Gov. Wolf’s proposal and instead passing a spending plan that does little more than kick the can down the road,” Thomas said. “Providing students with an opportunity to better themselves, and in turn better our commonwealth, is a vital responsibility for public officials and one that this state has been neglecting for far too long. Funding these increases with a reasonable tax on shale drillers and a few other commonsense ideas is not just good policy, it’s the right thing to do for the people of this state.”

At the news conference, Thomas suggested additional revenue streams for the 2015-16 fiscal year to offset education funding increases, including:

“It is disingenuous to say there aren’t funds available to properly invest in our children, but officials have to decide to prioritize our children over special interests groups,” Thomas said. “That is why I am calling on the citizens of this state to contact their local representative and urge them to come to the table with Gov. Wolf and compromise on a budget that moves our state and our schools forward.”

At the news conference, Thomas also called for the establishment of the 21st Century Cheyney University Commission to address the academic and financial issues currently affecting the historically black state university located in Delaware County.

Earlier this month, Thomas held a similar news conference to address the effect the budget impasse would have on health and human service providers once the state is unable to continue funding them.