Think Before You Post: Stephanie Humphrey, a modern day technology hero with a message 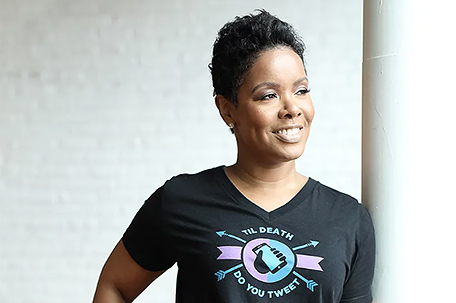 “Think before you post. Everything you do online is searchable and recoverable.”

This is the mantra of tech expert Stephanie Humphrey also known to households in America as “Tech Life Steph.”

The Pittsburgh native became a modern day tech heroine doling out weekly advice on her website and social media platforms.

Her journey began working as an engineer graduating from Florida A &M University with a B.S. in Electrical Engineering and a M.S. in Telecommunications and Networking Engineering from the University of Pennsylvania.

She gradually reduced her work schedule and prepared to leave engineering to pursue her passion.

The tech evangelist who calls Philly home preaches the gospel of managing your digital footprint while also regularly providing tips and highlighting the latest tech gadgets.

Through hard work and persistence, the “Tech Life Steph” brand which she began in 2011 became a “thing”–a national thing.

After nearly a ten year grind–including speaking to youth about “Til Death Do You Tweet,” her workshop she started in 2012 bringing awareness to the permanency of digital footprint–she began popping up regularly on our television screens via local and national outlets such as “Good Morning America” the “Harry” show and “NewsOne with Roland Martin” to name a few.

“That’s why my workshop is called Till Death You Tweet because the things that you post online will outlive you there,” says Humphrey who also authored a blog called “A Matter of Life and Tech” that put her on the radar writing tech articles for national outlets.

Since her tech journey began ten years ago, her workshop has reached local and national audiences.

“I’ve spoken to thousands of students at this point, I’ve been doing this formally since 2012, but even before that, while I was an engineer.”

Her message on the importance of managing your digital presence has evolved into Tech Life Steph taking it to print (literally).

Her debut book published earlier this year “Don’t Let Your Digital Footprint Kick You in the Butt” has topics ranging from how online activities can negatively impact employment opportunities, online bullying, and everything in between.

The book lays the foundation for the reader to consider their personal brand first, and then think about how their digital footprint can affect that brand. Then, the potential consequences of not maintaining that brand in a positive way are examined, including discussions on cyber bullying and sexting.

“I started writing it in June of last year, 2019, and I finished it in March of this year,” said Humphrey who acknowledged the challenges and self discipline it took to actually sit down and write a 60,000 word book.

So, how can your digital footprint “kick you in the butt”?

Humphrey emphasizes that your digital footprint is not only social media but everything you do online from emails, text messages, to Google searches and streaming platforms such as Youtube and Twitch. In essence, anything you do on an electronically connected device is stored indefinitely.

“You can post some raggedy stuff, and get in trouble for that. You could also send an email that threatens somebody that could get you in trouble. You could also Google something and that could be used against you. So, you have to be mindful about what you’re doing across multiple platforms, and not just social media.”

“There are internet archives that save copies of websites, saved on multiple servers. It’s called redundancy. For example, you post a picture on Instagram that might live on a server in Colorado. It also might live on a server in Georgia and Canada. That’s for their protection and yours because in case one of those servers fails due to a power outage, an act of war or anything like that.

For those who may have already made unwise decisions about what they have posted online, Humphrey has this advice.

“Don’t Let Your Digital Footprint Kick You in the Butt” is available for purchase on Amazon.com

Stephanie Humphrey Website: www.tildeathdoyoutweet.com to book virtual seminars for students, parents and professionals; and an online course for parents. You can also purchase bulk orders of “Don’t Let Your Digital Footprint Kick You in the Butt.”