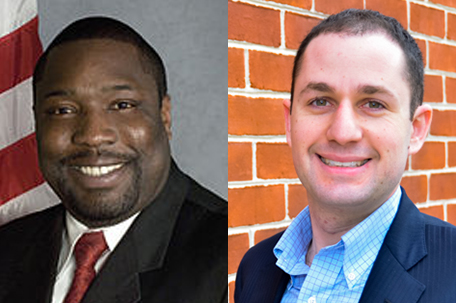 The battle for the Second Councilmanic District seat is a battle between for the future of the district itself.

From the gleaming towers of Center City and hip restaurants of South Street to the more industrial areas of Southwest Philadelphia, the Second District represents how the City of Philadelphia is changing.

Whether or not that change is welcome in the Second District is among the things that will be decided on May 19 in the City Council race between current City Councilman Kenyatta Johnson and his opponent, developer Ori Feibush.

Johnson, who represented the 186th District in the State Assembly before deciding to run for the Council seat, won the seat four years ago by a mere 20 votes over real estate entrepreneur Barbara Capozzi.

He believes that he should get another term because he believes he’s been effective, Johnson said.

“I have a track record of getting things done for a diverse district,” he said. “From senior citizen issues to getting potholes filled, I pride myself on representing everyone equally in a district that stretches from Eastwick to Center City. I’m confident that the vote will reflect this record.

Feibush came to the Point Breeze section of the Second District from Montgomery County in late 2005, a developer looking for places to build and jobs to create, according to him. Working with former city Councilwoman Anna Verna, he cleaned vacant lots, fixed up parts of Point Breeze, and created small businesses.

“I feel that I can do a much better job than the current councilman,” Feibush said. “If you look at challenges and the issues in the Second District, you’ll find that I have better, more pragmatic solutions to our problems. If you compare my approach and vision to his, mine is better.”

Now what the Second District’s issues are, and how they should be dealt with, depends on whom you talk to.

But one issue keeps coming up when you talk to Second District residents: development, specifically the definition of “affordable housing”.

That’s been something that Jasmine Rivera has been keeping an eye on since moving to the Point Breeze section of the Second District five years ago. She started to notice some changes to the neighborhood, changes that began with Feibush’s coffee house and with the homes—some costing as much as $300,000—that have sprung up around it.

Neighborhoods like hers only work if they’re truly diverse, Rivera said.

“We’ve already seen [the consequences of development] in the Graduate Hospital section,” Rivera said. “There’s no affordable housing there. I have no problem with development, but it only works if people from all walks of life can stay here.”

Feibush and Johnson have different definitions of “affordable housing”.

Feibush believes that people like Rivera, people afraid of seeing their elderly neighbors forced out of homes they’ve lived in for decades due to taxes, will be able to stay in their homes no matter what happens from a development perspective if they get the money needed to maintain their homes.

If he’s on Council, Feibush wants to make sure they get that money.

“There’s a real need to recognize who is at risk and construct some meaningful solutions for our Seniors,” he said. “They take pride in their homes, but they can’t afford to stay in them if they don’t have the basic resources to fix them up.”

But Johnson believes that it won’t matter if these Seniors can’t afford to fix their homes up if they’re taxed out of them by high-end development.

Education is another issue that has gotten a lot of discussion in the Second District. Both men have different ideas on how to tackle this. Feibush believes that City Council could help the School District of Philadelphia do a little better when it comes to using its resources.

“While I agree that Philadelphia doesn’t get its fair share in education funding from Harrisburg, we should make sure that the funding we do have is appropriated to every school. It’s not acceptable to me that our poorest schools are the schools with the least resources, he said.”

When asked about education, Johnson talked about the importance of a fair funding formula that would help the district’s children get the resources they need.

Like for example, libraries. Like many of us, Johnson read the Philadelphia Inquirer story, which showed that only 11 of the School District’s 280 schools had a functioning library.

“That’s totally unacceptable,” he said. “[City Council] needs to monitor the money it gives to the School District and make sure it’s spent on the children. We need to make sure that the principals and parents have the support they need.”

The Democratic Primary will be held on May 19.