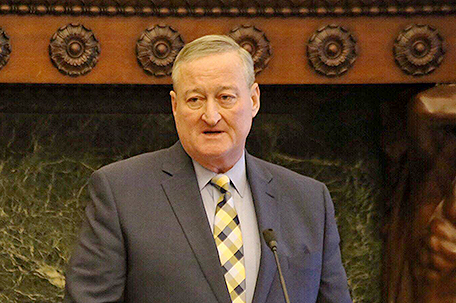 Mayor Jim Kenney came to City Council to share his vision for the 2020 fiscal year with his former colleagues and the rest of the city.

If his budget address to City Council was any indication, Mayor Jim Kenney is thinking about the future…and tailoring his spending plans to match.

On Thursday, Kenney came to his former City Council stomping grounds to outline his five-year, $5 billion spending plan. It’s a wish list that includes a whole host of things ranging from more money for district schools, money to ease the transition of returning citizens back into society, and even more money for road repairs.

Kenney began his speech by asking Council to join him in looking five years into the future for the City to see what is possible. From a well-funded school district to criminal justice reform to safer streets and development that keeps the city’s current population in mind, he laid out a vision for the City of Philadelphia five years from now that would benefit the city’s residents.

And it begins with this budget and the efforts of City government, Kenney said.

“This grand, five-year vision is attainable if we continue to work together, as we’ve done over the last three years,” he said.

This marks the first year that the School District of Philadelphia is back under local control, and because of this, the proposed budget includes $1.2 billion more in funding for the next five years for the district, $700 million more that it could have expected before the change, Kenney said.

Thanks to the work of Superintendent William Hite and the work of the newly appointed school board led by Joyce Wilkerson, the school district is moving in a positive direction, Kenney said. This money will help make sure it continues to do so.

“The city is providing [the increase] to ensure the School District continues its positive momentum and never again is forced to make devastating cuts that put our children’s futures in jeopardy,” he said. “We did this because these are all of our kids, no one else’s, and it’s incumbent upon us to do what’s right by them so that they can reach their full potential.”

Housing insecurity and homelessness are also addressed in this year’s budget. As part of the plan, $80 million is being added to the Housing Trust Fund.

The city’s Sweetened Beverage Tax was upheld by the Pennsylvania Supreme Court, so residents will start to see what that tax is supposed to do beginning with this year’s budget.

The Rebuild program and the Pre-K and Community Schools initiatives will be coming into their own as part of the five-year spending plan. Five more Community Schools will be designated this year and another three by 2020, bringing the total number of schools designed to provide education for children and services to parents simultaneously as part of the plan and the Rebuild program, designed to fix up the city’s recreation centers, will also continue, Kenney said.

In order to address the city’s opioid crisis, $36 million will be put to the city’s Resilience Project. So far, the program cleared out drug encampments, diverted addicts into treatment rather than have them arrested and established needle drop boxes through the Kensington Initiative for Needle Disposal, or KIND program.

But because the opioid problem has a lot of aspects to it, the plan calls for citywide efforts, including $26 million more in funding for the Office of Homeless Services to provide emergency, temporary and long-term housing.

“The opioid problem is not just a Kensington problem, it’s a Philadelphia problem,” Kenney said. “The city and partners have to take action to stem the epidemic by educating the public, reducing opioid prescribing, improving access to treatment and holding opioid manufacturers and distributors accountable. It’s my hope that I can stand before you in future years without needing to propose further investments because we stemmed the tide of the underlying causes of these systemic issues.”

Another city-wide problem is the problem of violence. The city unveiled the “Roadmap to Safer Communities,” a strategy designed to cut down on the violence that has been plaguing the city. Among the things provided in the budget for the Roadmap are 50 new police officers, neighborhood resource centers designed to provide parolees with the resources they need to reintegrate into society successfully, an expansion in the city’s crisis intervention services, and revamping vacant lots in challenged communities.

But while there will be new police officers, there will also be more police accountability in this budget. By the end of the 2020 fiscal year, all officers will be fitted with body cameras, Kenney said.

The approach recognizes the fact that you can’t address one without the other, Kenney said.

“Police Commissioner Richard Ross has done a stellar job of instituting many police reforms that have not only benefitted the force, but also the public it serves,” Kenney said. “But I know he agrees with me when I say that there’s no way that we create a safe and just city without addressing the intractable issue of gun violence. It cuts lives short, destroys families and sows fear in law-abiding residents.”

But while it was a nice budget address that contained the kinds of things that you’d expect a mayor who likes his job more than it shows, “wait and see” appeared to be the prevailing attitude among many who attended the speech.

District Attorney Larry Krasner was encouraged by the criminal justice aspects of the budget, but wanted to hear more before he got too excited.

“As with any budget, there isn’t a lot of things that are specific,” he said. “I hope that all of the specifics will be constructive. But I like the fact that he’s talking about real solutions to crime.”

“I think that it’s a safe budget,” Councilwoman Maria Quinones Sanchez said. “It’s good that it’s a five-year plan, but it’s important that the mayor and council work together.”

The schedule of budget hearings had not been announced as of press time.

X-Men: Days of Future Past Wolverine– travels back in time in latest for the sake of the future