There’s Something About Mary (Jane) 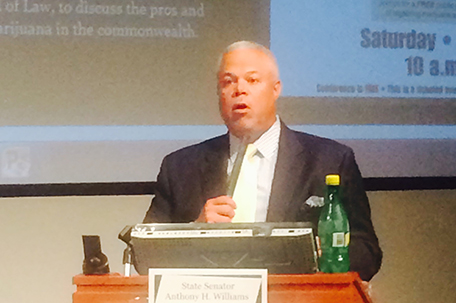 ABOVE PHOTO:  Sen. Anthony H. Williams at the  podium speaks on the legalization of marijuana.  (Photo by Denise Clay)

The legalization of marijuana was the subject of a daylong discussion at the University of Pennsylvania Law School on Saturday.

The subject of marijuana has been on the minds of Pennsylvanians since the legislature started discussing a medical marijuana bill in Harrisburg.

Now that Councilman Jim Kenney’s bill making  simple possession of marijuana an offense that gets you a citation instead of jail time here in Philadelphia has been passed and the subject of legalization of marijuana comes up.

On Saturday, State Sen. Anthony Williams brought all sides of the marijuana debate to the University of Pennsylvania Law School’s Fitts Auditorium The Great Marijuana Debate, a conversation that discussed the pros and cons of legalizing marijuana and what that could mean for society, law enforcement and Pennsylvania’s economy.

With states like Colorado and Washington legalizing the drug, and Colorado seeing serious financial dividends as a result, the time is right to talk about it, Sen. Williams said.

“Social perspectives on a on a lot of controversial issues are changing,” Williams said. “This is one of those areas that many of us who came into the legislature over a decade ago never thought we’d be talking about because we never thought it would be part of the social conversation.”

“All of the surveys indicate an evolving perspective on this issue.” Williams continued, “And for me, who is challenged all the time about putting kids in jail with no future, [marijuana possession] eats up a lot of time, money and resources that frankly should go someplace else. Personally, I don’t know how to get from point A to point B yet without having a little more understanding.”

Toward that understanding, Sen. Williams brought in a variety of local and national experts on marijuana laws, marijuana policy, and even marijuana itself.

And there is a lot to understand. As of press time, 21 states and the District of Columbia have legalized medical marijuana and 17 states have decriminalized marijuana.

First up was a discussion on the pros and cons of legalization featuring Derek Rosenzweig, co-founder of Pennsylvanians for Medical Marijuana and a former board member of Philly NORML (National Organization for the Reform of Marijuana Laws), Bishop J. Darrell Robinson of Yesha Ministries, George Forsythe, a former Maryland State Trooper who is a member of Law Enforcement Against Prohibition,and Captain Thomas Davidson of the Philadelphia Police Department’s Narcotics Unit.

In his remarks, Rosenzweig said it was time to legalize marijuana because the reasons for its prohibition make no sense. About 20.2 percent or 65 million Americans, use marijuana every year and about half of all Americans have used marijuana at some time in their lives.

Because the demand for marijuana is going nowhere, it’s time for there to be some benefit to taxpayers through legalization, Rosenzweig said.

“Marijuana prohibition was stated for all of the wrong reasons and is bad policy,” he said. “[Prohibition] solves nothing, it’s sold as a moral imperative, and because of the racial disparities, it’s rooted in racism and greed.”

It also criminalizes poverty, Forsythe said. During his time as a Maryland State Police officer, Forsythe began to see the War on Drugs as a War on Poor People, he said. By taxing and regulating marijuana, you remove the poor from the Drug War’s front lines and allow for better allocation of resources.

“Marijuana arrests are a complete waste of time,” Forsythe said. “When police officers are forced to go to court for a marijuana arrest, you take officers off of the street where they could be making a real difference. It should be taxed and regulated.”

While Bishop Robinson agreed with Rosenzweig and Forsythe that there is a racial disparity in terms of who is arrested for marijuana possession, he doesn’t believe that legalizing the drug solves that problem.

“It’s a racially biased policy, but as far as I’m concerned, legalizing marijuana doesn’t produce good things,” he said. “I think that the problem is systematic and that we have to deal with the way that minorities are targeted. If you legalize marijuana, Blacks will be arrested for something else. [Racial disparities] aren’t enough of a reason to legalize marijuana.”

Legalization was the topic of the second panel, which featured Councilman Kenney, Jahan Marcu, PhD., of the Americans for Safe Access Multidisciplinary Advisory Board and the 2012 “Cannabis Researcher of the Year”, Philadelphia Assistant District Attorney Kirsten Heine, and Rachelle Yeung of the Marijuana Policy Project.

While the racial disparities in marijuana arrests may not be enough for Bishop Robinson and others who think it should stay illegal, it is reason enough to consider reducing the penalties for marijuana possession, Councilman Kenney said. He introduced a bill in City Council on Thursday that would make it an offense punishable by a ticket instead of jail time.

The bill might not be popular with the folks in City Hall, but Councilman Kenney believes its just.

“We’ve gotten resistance from the Administration, the Mayor, [Police Commissioner Charles Ramsey] and the courts,” Kenney said. I don’t know why, frankly. But with a veto proof majority, we can ask the Mayor to issue an executive order stopping the [arrest] process that day instead of taking the chance that another three to four hundred young people would be arrested.”

About 80 percent of the marijuana arrests made in Philadelphia are among African Americans and having a drug arrest on your record makes it hard to get a job, thus perpetuating poverty and causing other financial woes, Councilman Kenney said.

“Philadelphia spends $4 million for police and $3 million in court costs for marijuana arrests,” he said. “That’s money that could go back to schools.”

Meanwhile in Colorado, the state has brought in $12.6 million in tax revenues since recreational sales began in January. Revenues for the year are expected to top $98 million.

To Robinson, the millions don’t justify the harm that legalization will do the community.

“It shouldn’t be about money,” Robinson said. “Ending the prohibition of alcohol produced more money, but it didn’t do go things. You have people driving drunk and doing other things under the influence of alcohol.”

While legalization isn’t on the table at present, the Commonwealth is looking at a bill that would allow a liquid form of marijuana, one with less potency, to be prescribed to people who would normally use medical marijuana, Sen. Williams said. The bill will probably be voted on this year and will most likely pass, he said.

But before that vote, Sen. Williams plans to hold another session like this, this time with the Faith-Based community.