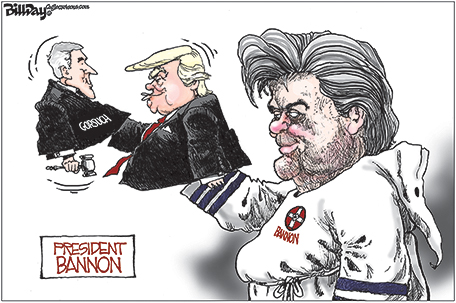 While the Supreme Court can’t continue to function under a 4-4 ideological split much longer, a coalition of Pennsylvania progressive groups says Judge Neil Gorsuch’s record precludes him from being the tiebreaker.

Currently, the United States Supreme Court is looking at everything through the prism of a 4-4 tie.

Since the death of Justice Antonin Scalia, the court has had a vacancy in it that former President Barack Obama tried to fill with D.C. Circuit Justice Merrick Garland, but the Republicans in Congress had other ideas.

“This is the most corporate court in modern times,” said John Neurohr, co-chair of Why Courts Matter Pennsylvania. “[President Donald] Trump has a chance to fill the vacancy due to Republican obstruction. This is a stolen Supreme Court seat and Trump has promised a Scalia type, a far-right ideologue, whose views are out of the mainstream of American values.”

Recently, a group of legislators and legal experts joined with a coalition of progressive groups — Why Courts Matter Pennsylvania, the Constitutional Responsibility Project, and For Pennsylvania’s Future—to tell members of the media, and by extension the public, why the Justice from the 10th Circuit Court of Appeals shouldn’t become the Supreme Court’s new tiebreaker.

Former City Councilman Angel Ortiz, Pennsylvania State Rep. Brian Sims (D- 182nd District), and Daniel L. Goldberg, legal director for the Alliance for Justice joined Neurohr in panning the choice of Gorsuch. The court needs someone who will consider citizens when he makes decisions and that’s not a tendency Judge Gorsuch has shown, they say.

While his academic record showcases his intelligence, and recent profiles on him show that he’s probably a nice man, there are a lot of rights that Americans enjoy that would be endangered should Gorsuch join the court, Goldberg said.

Want proof? Ask Alphonse Madden. Madden was a truck driver whose truck broke down while he was on a run on a cold night. As he waited for help in sub-zero temperatures in a truck without a working heater, he started to feel numb and made the decision to disconnect the truck’s trailer and drive to somewhere warm.

Madden was fired by the trucking company for leaving the trailer unattended. The Department of Labor sided with him, but the company sued, taking the case to the 10th Circuit Court of Appeals. The only justice that sided with the company was Gorsuch.

And the fact that he’d take the side of a corporation instead of that of a worker in danger of freezing to death is the reason why Gorsuch shouldn’t get a seat on the nation’s highest court, Goldberg said.

“I’ve heard a lot in recent days about how nice and charming he is, and how he’s a true Westerner,” Goldberg said. “I’ve heard about his dogs and all of his personal attributes. But his record is getting lost. His record in the Court of Appeals shows how he would rule. His record shows that he favors the wealthy and powerful at the expense of regular Americans.”

Like many of the people that President Trump has put in his cabinet since being sworn into office in January, Gorsuch’s appointment to the Supreme Court sends the wrong message about the judicial body, Sims said. Gorsuch has sided with the far right in cases regarding the Affordable Care Act’s contraception mandate that have come across the 10th Circuit’s desk, most notably the Hobby Lobby case.

Since the Supreme Court has been the place where marginalized groups have come to get the rights that should have been granted to them under the Constitution, having someone like Gorsuch on the court is a concern, especially since he was nominated by a man whose path to the presidency was smoothed by hate groups, Sims said.

“This nominee is without a doubt the most critical one the President has made so far, so we have to make sure that it fails,” he said. “There are rights for a lot of Americans that came through the Supreme Court. A nominee in the Trump mold could be disastrous both nationally and internationally due to this president’s anti-everyone policy.”

Right now, the coalition of progressive groups is working on getting Pennsylvanians to try and convince Sens. Bob Casey and Pat Toomey to vote no on Gorsuch’s appointment.

The only way that this can happen is if the press puts tells the Justice’s entire story, Ortiz said. Since there needs to be an impediment to the baser impulses of the Trump Administration, and Congress can’t be counted on, the press and the courts will have to fulfill that need, he said.

“We have to depend on the press and the court system to act as a check on the power of the president and his appointments,” Ortiz said. “We need for the true story of the judge to be put out with no embellishment and no focus on aesthetics. We need the history of [Gorsuch’s] positions put out there to let workers know that they won’t be protected. We have to let people know what his appointment would mean to regular people.”

If you are interested in contacting Sens. Casey and Toomey regarding the Gorsuch nomination, here is their contact information: