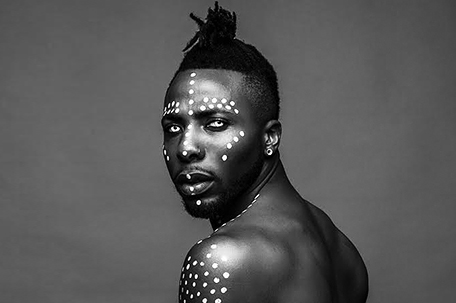 ABOVE PHOTO:  Olutayo Bosedo plays the Lead Crow in the Live TV production of NBC Universal’s The Wiz!

The live production of NBC Universal’s remake of The Wiz! premieres on Thursday, December 3rd at 8PM. This three-hour live event stars newcomer Shanice Williams as Dorothy. Winner of 7 Tony Awards, including Best Musical, the original was the Broadway hit and the feature film spinoff starred Diana Ross and Michael Jackson.

But this classic is getting a modern update from a Tony-winning creative team, the imaginative Cirque du Soleil Theatrical and a diverse cast of showstoppers create an eye-popping new take unlike anything ever seen. The star studded cast features Queen Latifah, Common, Mary J. Blige, Neyo, Stephanie Mills, David Alan Grier to name a few.

Playing the role of lead crow is Olutayo Bosedo, who over the past few weeks has worked his way up the ranks from dancer, to munchkin to now, the lead crow. Initially he auditioned for the role of a dancer, but after inquiring about the roles, Bosedo was promoted. The young New York native got his start in dance at the age 16 after being dragged to a dance class.

This recording artist/performer is not just a dancer. “I’m an artist”, said Bosedo who will also be joining The Wiz! cast for a performance in the Macy’s Thanksgiving Day Parade. He’s also releasing a single next week, right on the heels of this monumental production, entitled “Rise in Love” (available for free download on SoundCloud).

Although the performer isn’t one to be star-struck, he says that the cast, including the most famous ones, have developed a sort of bond. “It’s great when you see Mary (J. Blige) in the morning and say hello, and she’s like ‘good morning Olutayo’.

The cast has been working hard to prepare for the 100 percent live performance. Most days, rehearsals last 12-16 hours or more. The stamina necessary to perform at this level is intense, but it’s not at all in vain for newer, younger stars like Olutayo, who has dreamed of moments like this.

“I got to look at one of the monitors recently in rehearsal, and was able to see the show the way everyone will see it when it airs. It was a bit of moment. The Wiz! Live is going to be absolutely amazing.”