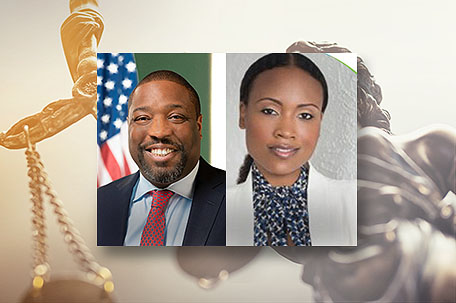 The prosecution and the defense have both rested in the trial of Councilman Kenyatta Johnson and his wife, consultant Dawn Chavous. Now, they wait for the jury’s decision.

After three weeks of testimony, hundreds of exhibits, and many questions, the trial of Councilman Kenyatta Johnson, his wife and two former Universal Companies executives is now in the hands of a jury.

Johnson, his wife, consultant Dawn Chavous, and former Universal CEO Rahim Islam and former CFO Shahid Dewan are now awaiting a decision on charges that the four of them allegedly put together a scheme designed to pay Johnson a bribe to help Universal protect a group of dilapidated South Philadelphia properties from being reclaimed by the Philadelphia Redevelopment Authority. The bribe, prosecutors allege, came in the form of a $66,750 “low-show” contract for Chavous.

Dewan and Islam are also accused of a variety of crimes including racketeering and embezzlement as part of the case. Right now, the jury made up of nine men and three women are deciding the bribery charges alone.

When the jury of eight men and four women came to the James A. Byrne Federal Courthouse on Wednesday morning, Judge Gerald McHugh gave them the case. He made sure to give them the particulars of the case before sending them out to deliberate.

Shortly after beginning deliberations, the jury sent word that it had questions regarding evidence and wanted to see all of the exhibits presented during the case. The attorneys for both sides were in the process of putting that collection of exhibits together on Wednesday evening.

After the defense rested its case on Monday, closing arguments began on Tuesday with Assistant U.S. Attorney Mark Dubnoff walking the jury through the government’s case. Universal was having money problems and knew it could solve those problems by selling the Royal Theater, he said.

But it needed to hang on to it to do that, so they needed Johnson’s help…and were willing to pay for it, he said.

[The defendants don’t] want to tell you the real reason why they hired Dawn Chavous,” Dubnoff said. “They hired her to cover up their bribe to Councilman Johnson. These four defendants devised and put together a scheme to deprive the citizens of the Second Council district of [Johnson’s] honest services.”

In his closing argument, David Laigaie, Islam’s lawyer, called the government’s case “a theory in search of supporting evidence.” Universal wasn’t in financial trouble, and there was no need to bribe Johnson because the company had enjoyed his support in the past, he said.

Pat Egan, Johnson’s lawyer, told the jury that despite what the government would like you to believe, they’re not always right. Although FBI Case Agent Richard Haag was the witness that spent the most time in the witness box, he wasn’t being completely honest, he said.

“All of them are presumed innocent,” he said. “There’s so much reasonable doubt that it’s falling from the trees.”

As of press time, there hadn’t been a verdict reached in the case. The jury returned to continue deliberations on Thursday morning. There will be no court on Friday due to the Good Friday holiday.